By LoppEar (Mon Nov 30, 2020 at 03:17:32 PM EST) (all tags)
Weekend before Thanksgiving, the workshed burned to the ground. We're all fine, it was built far enough from the house that it was all contained. 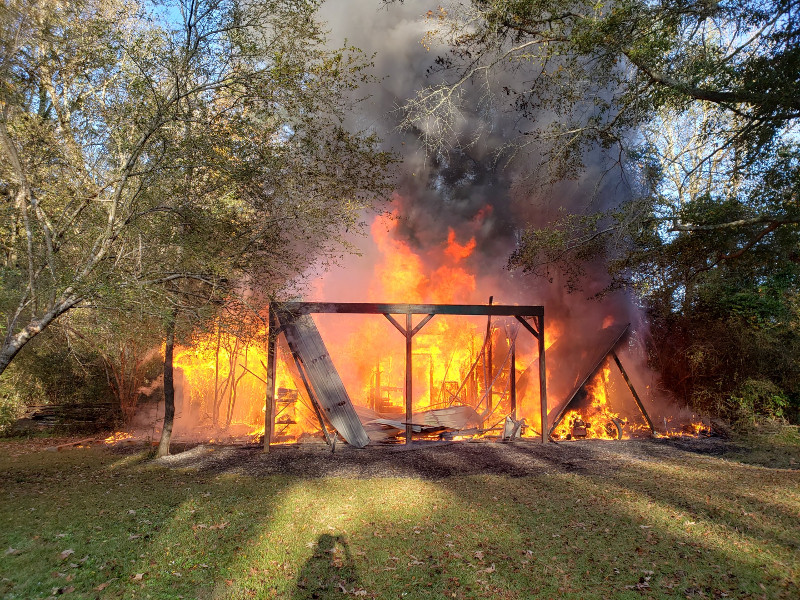 My 3yo was the first to see it, because I was in the toilet. She has made sure that's part of every retelling. Power surged in the house, and there was panic in her voice, so I rushed out. And out the the porch where it was already fully in flames.

She's made sure that was part of every retelling too.

In hindsight, thankful it was already so clearly a loss that it didn't even cross my mind to try to rescue anything, to pull the motorcycle or something. But I did have to split my time between moving a garden hose in case it decided to move through the trees or grass towards the house, while she wanted to stay inside - so proud of her, she grabbed some library books to nervously flip through while I came in and out of the front door checking on her and checking on the fire.

It's 15min for us into town. Fire trucks were there in less time than that, which is tricky since 5 of those minutes are down a dirt road that I normally remind visitors is confusing because the house numbers aren't in order and by the time it gets to us you might think you're off the edge. Roof had already collapsed in the photo above I took right after calling 911, they spent a couple hours tearing it apart and soaking it, two tanker truck trips plus the pumper. Then they sent the pumper back out in the afternoon to finish off the smoldering bits - I had to hose down a tree on the backside that was a little too actively dropping burning bits on the ground after they left, but otherwise just watched it.

What a lot of stuff! Working up the asset list has been draining, I don't have a lot of photos of it before (when has it been organized enough to take a pic?), but walking back through it in my mind and the bent metal bits and bobs. Thankfully I wasn't just in the middle or wrapping up any big project (the built-in bookshelves had been finished a few weeks earlier), and we don't regularly park the cars in there. But anything bulky to store was out there, tents and tools and bikes and so many tools... it's just stuff. Sounds like insurance is going to do the best they can, so far.

County fire inspector was out the next day, insurance fire investigator came out today. "Not arson, probably electrical, started on this back wall that is least surviving where most of your tools and battery charger were." Raked the ashes looking for wires and battery remnants with them today, didn't find much of anything left to say.

A friend here lost their barn to lightning this summer, and another friend here just found out their in-town storage building burned down Wednesday. Double check your insurance and coverage folks, and just go ahead and do a photo walkthrough of your place, for me.

Ordered a rolloff dumpster just now to start cleaning it up.