I was coming down a hill towards the main road, when I noticed that traffic was queuing across the mini roundabout and back up the main road.

Ah ha! Thinks I. I'll cut across the pub car park on the corner, and join the traffic further down.

So I go to get up on the footpath at a dropped kerb, to see as I rapidly approached it that the dropped kerb wasn't dropped that far.

I'm going to come off thinks I, as the bike doesn't mount the kerb but slides along side it as I carry on heading left.

Thump, cue rapid deceleration as I tip over sideways and slide along the pavement.

Several people stop and help as I lie on the floor trying to work out if I'm badly hurt or not. My head and knee hurt, and I took a whack to the upper body.

One of the people who stopped flags down a passing ambulance who happened to be driving past.

I'm sat on the floor taking stock of things, but it looks like I've got away fairly lightly.

"Your head is bleeding" says somebody who stopped, so I press my buff against it.

The ambulance people help me up. I can stand without wobbling, no dizzyness. I thank everybody who stopped to help, and the ambulance crew offer to give me a lift back up the hill to home as it's so close.

I've not assessed the bike properly yet, but there's a least one thing wrong with it. The brake lever on the left side is bent. Not sure what else is wrong, but bound to be more.

So, I'm at home now. Wounds washed. Graze to my knee, graze to my head. Chest feels like I've been sat on a bit. 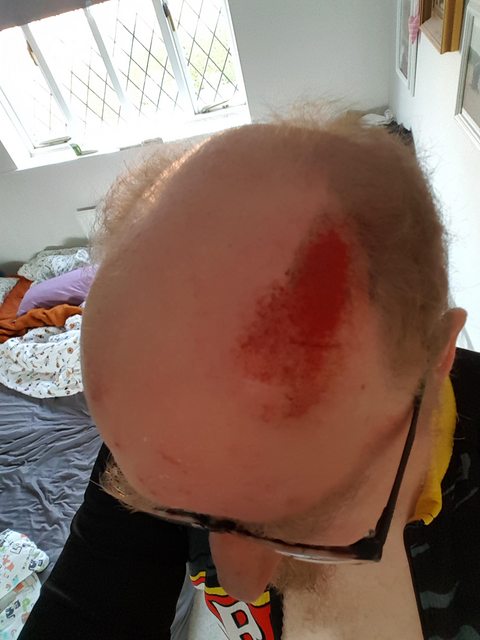