What I'm Reading
Who Cooked Adam Smith's Dinner? by Katrine Marcal. Feminist critique of modern economics and neoliberalism. Quite powerfully written, it tells a story of how we became obsessed with "Economic Man" and the ideology that self-interest is all-important.

Has an interesting insight into the way that Adam Smith and others wanted to "conserve" the resource of love into a feminised domestic realm, while the world of formal work was to be a masculinised arena of competition. A more recent development is to try to apply "economic" thought to the domestic realm as well.

While it's well-done, it does repeat a lot of other standard critiques: a lot of the material like the criticism of unrealistic assumptions; over-emphasizing GDP; paying too much attention to models and not enough to data, is already pretty familiar. As a tool of persuasion, one problem is that the economic establishment likes to claim that it's fundamentally reformed itself since the 2008 crisis while actually changing very little. (Example). In theory, the problems with economic thought are being addressed, albeit on the periphery of behavioural economics etc.

The book does have some powerful passages:

When we are all rational individuals, questions like race, class and sex become irrelevant. Why, we are all free. Like the woman in the Congo. She who agrees to militia men having sex with her in exchange for three tins of food. Or the woman in Chile. She who works as a fruit picker even though the exposure to pesticides will lead to nerve damage in the child she will give birth to two years later. Or the woman in Morocco. She who takes a job in a factory and then has to force her oldest daughter to quit school so she can care for her siblings. They always have a complete overview of the consequences of their actions. They always make the best possible decisions.

Economists are convinced that they are modelling the deepest causes of human behaviour. Their critics are only scratching the surface -- if you torture the data enough, eventually it will reveal the truth: everything is economic man.

One logic. One world. One way of being.

The answer to the title is that Adam Smith's mother cooked all his dinners (Smith never married) presumably out of love rather than self-interest. Otherwise Marcal does seem a bit harsh on Smith, who was nothing like as dogmatically right-wing as his followers.

What I'm Reading
The Furthest Station by Ben Aaronovitch. Novella in the Peter Grant / Rivers of London series with the wizard copper investigating ghost sightings on the Metropolitan Line. I enjoyed this a lot, more so than the last novel. The length is enough for a bit of plotting and London lore without getting repetitive, Worth picking up if you like the series.

OBLF
Weight seems OK. A couple of pounds below target but that might be dehyrdation in the last readings. 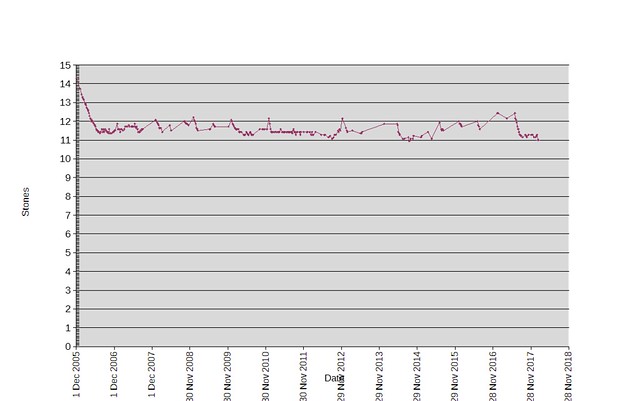