Everyone needs some good covfefe every now and then

So I present to you, Covfefe, my new commuter. 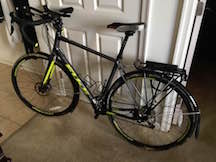 I pretty much commute by bike year round. So I've been wanting a rig with disc brakes and fenders for a while. That coupled with the various mechanical difficulties I've had this past summer and long swaths of time where my bike was in the shop, motivated me to buy a new commuter rig and demote The Frankenbike to back up status.

I was kind of surprised at how much bike you can now get at the bottom of the semi-serious range. After adding fenders, a rack, pedals, and paying The Man his fair share in taxes, I ended up $250 over budget.

I swapped over my old saddle and aerobars.

I was a bit surprised at how heavy this bike is. My old steel framed commuter is actually lighter.

The latest Tiagra level shifters are much smoother than the aging ones I have on The Frankenbike.

The default cassette has a much larger chainring in the back than the 11/25 I've been riding for the past few years.

What the aluminum adds in energy transference, the larger tires take away. I was riding 23s for a while on my commuter. Went up to 25s when I bought a racing bike last winter. 28s are whole lot bigger than 25s.

With the fenders, I have some toe overlap in the front. That's taking a bit of getting used to. This is mostly a function of me riding with big clunky MTB sandals. If I switched shoes the overlap would probably go away entirely, or at least be greatly reduced.

It doesn't feel as fast as my old commuter but Garmin tells me that I'm going at the same speed.

Unrelated to the bike itself, I'm been trying to increase my RPM. I went to a seminar a while ago that recommended having a cruising cadence of 92 RPM. Unsurprisingly, I don't get down to my 11 very often anymore.

Also unrelated, my wife started telecommuting so now I no longer have to driver her to work. I found a nice 10.5 mile route to work that is pretty anti-stressful. The only downside is that the old route was really easy to extend on a nice day if I found myself with extra time in the morning. The new one, not so much. Well, it's easy to extend on roads that have mostly bike friendly motor traffic but those roads are in desperate need of repair. They're bad enough that I won't ride them and I'll ride over almost any road.