You can't wash your hands in a buffalo

What I'm Reading
Drone Warfare by Medea Benjamin. Short book about how drone warfare works. Some of the information there was familiar, but it rounds it up in one place and did tell me some things I didn't know.

Benjamin highlights how drone warfare has shifted responsibility for bombing away from the military, towards spy agencies and civilian contractors. "The CIA, not the Pentagon, operates most drone strikes in Western Asia". Blackwater/Academi and other companies operate drones.

Another point is that drone operators actually see a lot more of their targets than a manned bomber would. Bombers usually just fly over once: drone operators may surveil their target for days before pressing the button. In that respect they may feel more of a connection than bombers do.

Benjamin also says that drones are not necessarily much cheaper than manned flights, as it takes a similar effort from ground and support staff to get a drone into the air. Another detail is that some drone controllers were deliberately modelled after the playstation.

The accounts of the toll drone strikes take on civilians are familiar but depressing. It's stressful to live under the constant threat of bombing. "Double taps" mean that rescuers who attempt to aid victims of the first strike are often hit by the second. After a drone strike, "Khorasan Mujahedin" often turn up and torture people nearby in an attempt to find snitches who might have reported the target.

I've read about this before, but Benjamin also discusses the case of Anwar al-Awlaki, the first US citizen to be assassinated by a US drone strike. Apart from the likelihood that he had no direct involvement in terrorism, it's a shocking precedent.

Overall, while drones don't have much difference in capability than manned aircraft, they seem to have been used in practice to introduce a new era of warfare, where killing is done by civilians and contractors, with less oversight and accountability. She quotes "No less than their insurgent targets they are fighters without uniform or insignia directly participating in hostilities".

One possible weakness is that she writes from a kind of left-activist perspective, which might alienate readers from the other side of the spectrum.

Overall, an informative but depressing book.

Me
Had a nice birthday lunch lately. Ate some meat. 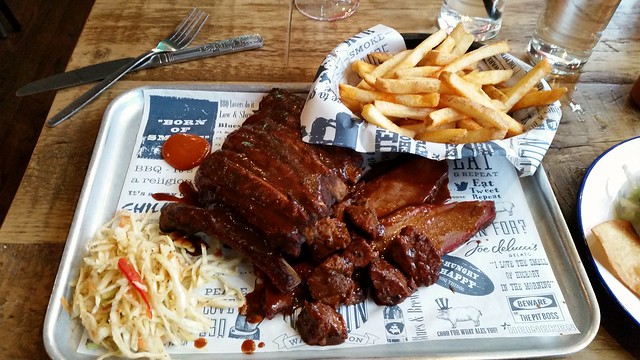 Took toddler to Kew Gardens again lately after he begged us, soon after he watched "The Empire Strikes Back". He kept saying "Star Wars tree!" in the hot, damp Palm House, pretty sure he thought he was in the Dagobah System.

What I'm Reading 2
Farthing by Jo Walton, author of the superb "Among Others". Wanted some light relief from grim books about politics, war or the holocaust; and from the first few pages this seemed to fit the bill as a country house murder mystery.

In fact it's pretty much the opposite: set in an alternate universe where Britain reached a peace with Hitler in WW2 (accepting French colonies in exchange for an end to the war) it involved all of these. Though it's set in the past, it features corrupt politicians are using a fear of terrorism to gain excessive powers in a very contemporary way.

I really liked this book as well. It has a well-realised and believable world, a decent plot, and dramatic but believable characters. It also subtly and deliberately undermines the conventions of the country house murder mystery novel in ways that I think might annoy fans of that genre.

Excellent book, well worth reading. It's the first in a trilogy, will definitely be looking out for the others.

What I'm Watching
Saw Interstellar on DVD. I'd been meaning to see it for a while but was put off by the length since I don't have much time. Really liked it though: thoughtful science fiction with some good action scenes as well as emotional drama. Along with "Moon", "Gravity" and "The Martian" there seems to be some good science fiction around in a more realistic vein these days. Liked the creatively designed robot and the realistically dystopian future. Well worth seeing.

Random. Etymology of GIGO, LIFO, FIFO. Why there was a robot butler in Rocky IV.

UK Politics. TFL to take over most of London's rail network. How Jeremy Corbyn has reshaped the Labour party, Corbyn's supporters more working class. What the Polling Inquiry said. A Conservative coup. People will only be interested in EU referendum for 7-10 days beforehand. David Cameron makes a horrific populist speech every Monday to "shape the agenda". Non-EU migrants to be deported if not earning £35,000 after 5 years.

World politics. US likely to retain a white majority. Far right comes to Sweden. 32 worst anti-feminists. What they say about #BlackLivesMatter today they said about MLK .

Articles. 11 Reasons Why 2015 Was a Great Year For Humanity. London's Crossrail needs to rename almost all its stations. The fight that broke Daesh. Flight Test: Antonov An-2. How "The Winds of Winter" could be published in 3 months.