So you want to be a silicon man?

In the brutal heat of a summer day in southern Maryland.

Update [2015-7-5 18:23:44 by lm]: Finally got through all the technical glitches from FinisherPix and uploaded the best from each leg of the race.


The first challenge was waking several hours before dawn. Transitions had to be set up by 6:40AM and the race was a 90 minute drive away in good traffic. But, as there was not likely to be any parking close to the starting line, I was planning to take a shuttle "leaving every 20 minutes" from a local school a few miles away. This meant setting the alarm for 3:30AM. I met my goal of being on the road by 4.

The drive down was mostly uneventful. The local "alternative" rock station DC 101 played an uncharacteristically good string of music and once they turned into WBMR (Blind Melon Radio) I switched to the local NPR station. For the sweet love of Cheeze Wiz why do I hear No Rain every time I turn on the radio?

Stopped for coffee about 5 minutes away from the middle school parking lot. Had a couple sips while waiting in line for the bus. Turns out the "shuttle" was a fleet of school busses. I don't think that I've been on a school bus since 1987. They haven't changed much. One new thing that I did notice was the "Bodily Fluid Cleanup Kit" mounted at the front of the bus right next to the first aid kit. When did that become part of the standard equipment on a school bus?

Had plenty of time to set up my transition even if I was feeling a little low rent. My bike is a $500 commuter bike (a 16 speed Torker Interurban if you're curious). I don't even have proper bike shoes. Rather I'd picked up a pair of suede sneakers (Vans) at the thrift store and had pedals with straps. I'm pretty sure that there wasn't a bike on the racks that cost less than 4x what mine did. Some cost more than a new car.

At 6:45, the swim waves started taking off with the pro-males and then pro-females taking off first. They were special. They had a start pistol mark their start. The rest of the waves got a blast from an air horn.

While waiting for my wave, I noticed a spectator that had ridden his vintage British 3 speed to the staging area to watch. I tried to spark up a conversation. He wasn't having it.

When my wave (wave 10) started queueing up, they announced that it was the largest wave in the race. Who knew that males aged 41-44 would numerically dominate participation in the race?

And then the air horn blew and we were off. Fortunately the Choptank river was calm and the temperature was mild. Aside from the salty taste and bits of sea plants floating around it was almost like swimming in a pool. Well, if the pool had 10 people to a lane. It was a crowded course. At one point, when swimmers from the wave behind started catching up, I found myself with a trio of hot women climbing on top of me. They didn't stop. Rather they called me rude and kept on trucking.

The last 150 meters was more of a walk than a swim. The water just wasn't deep enough to swim. I climbed out of the water at 50:43. Immediately I tripped and splatted onto the sand, kind of half rolling and popping back up. The crowd gasped when tripped. And cheered when I popped back up. I had sand on my face. I should start calling myself Officer Casebolt. 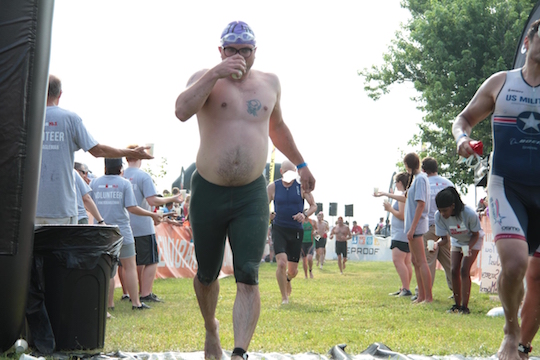 The bike route for Eagleman is flat, flat flat. I took off and didn't look back. 10 miles into the race and I'm like "hell to the yeah, this is awesome". At 20 miles my taint started to hurt. At 25 miles, there was no more pain because I could no longer feel it. At thirty miles the pain came back. At thirty five miles I was past dehydrated. The sun was fully overhead. Temps were in high eighties. There was not a cloud in the sky. Despite having gone through 80oz of gatorade, water, and ginger ale, I could not drink enough fluid. At 40 miles I was ready to be done. At 45 miles I'm all "how fucking long is this thing?" At 50 miles, each mile kept getting longer and longer. And I passed the emergency crew cleaning up what was left of a bicycle accident. Total time on a bike: 2:58:03. Split one (at 29.5 miles) I averaged 19.79 mi/h. Split two (the final 26.5 mi), 17.94 mi/h. 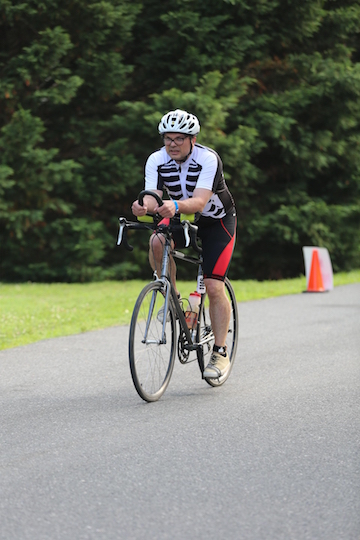 At transition two, I gulped down more ginger ale and prepared for the run. I made the mistake of trying to run barefoot. Did I mention the temps and sun yet? A quarter of a mile down the pavement, I realized that already had blisters from the hot black top burning my feet. I sat down by the side of the road and put on some toe socks and my huaraches. Before the end of the first mile, I was already out of gas and started alternative walking sixty paces with running 500 paces.

At this point the heat was unbearable and it was impossible to drink enough water. I saw the emergency squad four more times. I don't know if they were all for heat related injuries but in one case, they had a guy lying off in the grass and they were slowly pouring cups of ice water over him. It was brutal.

By six miles out, I was done. I mean, I was DONE. Only problem was that the course was 6.55 miles out and 6.55 miles back. Even if I gave up, I'd still have to make it those 6 miles back. Time to keep on keeping on.

At every aid station I was gulping as much of the water and gatorade as I could. I was also filling my cap with ice and putting it up on my head to help me stay cool. It didn't work. It was insanely hot. 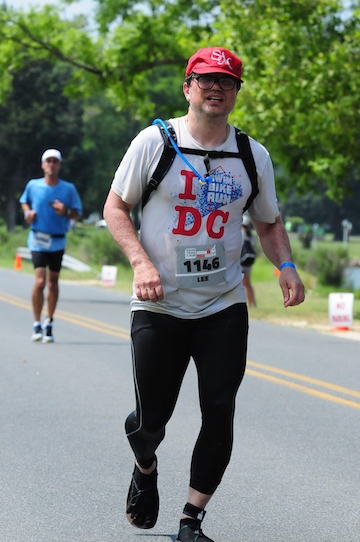 After crossing the finish line, I grabbed a cold bottle of water and an apple from the food tent. I sat down in the shade and that apple was one of the 10 best apples I ever tasted. Then I went to go load up my gear and it dawned on me that I was 3 miles away from the school parking lot and the "shuttle" didn't take bikes. I walked about half a mile to try to limber up a bit and then slowly rode my bike the rest of the way.

And then all that remained was the final challenge: driving home. Eagleman takes place in Cambridge, Maryland. If you try driving from DC to Ocean City, you'll pass right by Cambridge. It's a nice town. It reminded me a good deal of Rensselaer, Indiana. When I was kid, my mom was friends with a nun who was originally from Rensselaer. Some summers we used to drive up and visit for a few days. It was a nice little town. But anyway, on a Sunday late afternoon and early evening, you have all the return traffic from Ocean City to DC to contend with. The return drive took three and half hours.

When I got home, I didn't know what hurt the worst, the muscle soreness, the chafed areas, or the sunburnt areas. I took precautions: SPF 50 sunscreen, body glide, etc. They didn't help enough. I found myself alternating between chills and feeling far too warm. More ginger ale. More water. A 12 pack of Taco Bell crunchy tacos. The first half of the execrable disaster "epic" 2012. And, finally, a glass of wine and I hit the hay.

I slept better than I have for years.