June is a rough month

Plus, always look on the bright side, prom pic, college visits, pool parties, Amore, Consider Phlebas, Use of Weapons, Camp Netflix and less.

Poll: Good career for a person with ADHD?


June is a busy and expensive month. Every June we have our anniversary, my wife's birthday, Father's Day, minivan inspection and my mother's birthday. This June we also had prom, and a Venture's picnic we bought food for, and a wedding shower coming up. That is a lot of extra expenses.

This June we also had charter school graduation, along with several associated pool parties, a night before dinner, a week before portfolio presentation, and prom related stuff. That's a lot of extra time from our calendar.

The prom is over, see the pic. Sixteen_year_old is in purple/pink, you can also see newspaper_girl and sa_girl, and I forgot if I named the other two.

Sa_girl's dad chauffered them around in a decorated Previa where the middle seat was turned around, and they spend the night at the ginger lass'es  house. 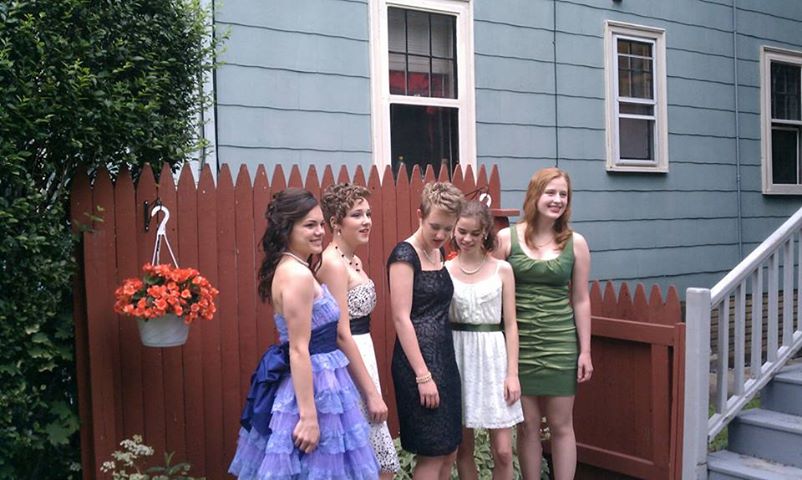 Two days after was the Scout picnic. She pissed me off, she was supposed to help plan it and bring food, she put that off until the last minute. At least she dealt with the conflict with Girl Scouts ahead of time. We're supposed to get reimbursed, I need to nag her again about it.

Always look on the bright side of life

Which is a good motto some days.

The bright side of nearly seventeen year old skipping her Regents Physics exam because someone told her it wasn't necessary, and possibly ending up with a C in AP Physics instead of a B or A is that she's learning fucking up has consequences while education is paid for with tax dollars, rather than learning that while draining her college fund. Someone has a shitload of maturing to do, and maybe a gap year working a minimum wage job isn't such a bad idea.

My wife and I remember her telling us her teacher said it was okay to skip it, but today she doesn't remember who it was, but it wasn't her teacher. Ah well, the tuition of the school of Hard Knocks is pricey, but sometimes the only way to learn.

The bright side of relative poverty is partially paying for a birthday cake using cheap beer can deposit money. I think there's a "You might be a redneck" joke in there, too. Mrs. Ha did like her cake.

Related to the bright side is that sixteen_year_old didn't do as well on the SAT's as her friends, even the "dumb" boy crazy one. Her SAT scores were 1860, breaking down into CR 640, Math 650, Writing 570. Her friends did about 100 points higher. To be fair, many are in creative writing, which means they can write quickly and succinctly, and did very well on the writing portion.

Sixteen_year_old is still re-evaluating college choices. She wants a fun, exciting, outdoorsy career, which doesn't have to pay a lot, just enough to get by. What college do you go to get hired as a wildlife photographer for National Geographic?

Yeah, she's pretty naive there. At least she's admitting that as someone with ADD/ADHD, many careers won't appeal to her.

She's also considering a gap year, or taking classes at a Community College. She has a lot of maturing to do.

We did get to see the University of Buffalo over Memorial Day weekend.
It's a new campus, maybe only 30 some years old. The good about that is the buildings are almost all connected, once in the academic core one can avoid Buffalo blizzards. The bad is the buildings look all the same, and there isn't much character, or college type feel. That happens as campuses grow, nearly_seventeen_year_old's high school uses old dorms from the University of Rochester, when it was downtown.

Lots of wifi and power outlets, a Starbucks, CVS and Moe's on campus, but she still prefers RIT. I prefer SUNYAB's price. One problem with UB was that the Dipping Dots vending machine was not working. How can you expect kids to survive school without a functioning Dipping Dots.

Somehow my wife cracked the top 100 customers list for the East Ave Wegmans. I think it's because I no longer use my barely functioning loyalty card and just use our home phone number, which probably credits her account. Or they based the ratings on a month when we were buying stuff for extracurricular activities and lots of meds. Regardless, she got an invitation for a complimentary meal at Amore, an Italian restaurant carved out of the new East Ave wegmans. It's standalonish enough to have a liquor license.

Oh yeah, the old crowded store was torn down and we were without a close Wegmans for three months. It was rough.

The new store is bigger, laid out like other Wegmans and devoid of charm.

Anyhow, that afternoon I'd broken a borrowed computer by dumping core into a huge zfs pool and am trying to recover it before our dinner date, while my wife ran sixteen_year_old to work and then ran nearly_twelve_year_old to her first end of the year class party. I couldn't fix it so I left it for next Monday, rushed home and off we went. I had steak and tiramisu, my wife had scallops and mousse. The food was great, on a part with Northside, as were the prices on the menu. The service was very attentive, the ambience was great for being carved out of a supermarket, it was noisy and they didn't put enough wine (Santa Christina) in the wine glasses. Well worth what we paid (the tip), but if I was going to spend around $100 for dinner for two, I'd rather do Tap and Mallet for a beer centered pub food meal.

Off to Camp Netflix

The sixth grade dinner was nice, but long. It was close to 10 pm by the time we got home. We had to be back at school before 10 am the next day, it barely made sense to leave.

We biked to school for the last day, falling in with another classmate and mom. There were lots of bikes that day.

The Passage Ceremony appeared to have been tightened up a bit, it didn't seem as long. I'm still mentally adjusting to never going to another one, and still adjusting to leaving that school. It has been a pretty intense environment, almost cult-like.

One of the families offered their inlaws inground pool for an after ceremony party, we went. The water was too warm to be refreshing, about 90 degrees (maybe 34 degrees in the civilized world) but the youngest spent the day in the pool, sometimes going off the diving board.

I spent the time getting sunburned and talking to other parents, many of whom I hadn't ever talked much with. The dad running the party was about my age, from Nebraska, so we chatted about the glory days of the NCAA in the 80's. He's also big in the cross-town high school's robotics team, there's a chance our youngest will be able to get in there, in case the Lego Robotics team ends its run.

One of the parents was talking about all the camps their boy wants to go to, and how they'll figure out a way to do it. Our girls are going to different sorts of camps. Even if we could afford it, the youngest prefers to relax on the couch, so it's Camp Netflix for her. The oldest picked up some hours being a swimming aide at a Y camp, so it's Camp Work for her, or her perhaps a Work Camp. If there was a place we could send her to help her with her ADD, we'd send her to Concentration Camp.

The oldest had a sleepover that night, same place as after the prom, so it took some deft timing to get home, go to the garage to pick up and pay for the minivan, get home and take her to the sleepover. It's in a bad part of town, which made driving annoying. You know, people who pull up next to each other on narrow residential streets to talk, people who don't want to go to the right around someone turning left on a light, people who wait at a greenlight chit chatting with a bicyclist they know. My wife was worried that it took me so long to get home, but hey, better to be slow and polite rather than risk an incident. The sleepover house is near the cross-town high school, so I may be going there a lot.

Next up, pool party on Saturday, hosted by a Lego Robotics family. We may bike, as a family, save for nearly_seventeen_year_old, who has to work and was not invited.

I scored three Culture books at the Browncroft sale, for fifty cents each. That's a deal.

Consider Phlebas was confusing in the beginning, and I had the headstart of knowing much of the Culture terms and ideas. It was a hard going at time, and didn't flow as well as his later books.

I think Player of Games would be a better intro.

I got Banks after reading Use of Weapons. I started rereading it as soon as I finished, it's that sort of ride, bleakly witty, horrible and thrilling.

I also finished up the 2006 remaster of the first Star Wars a few weeks back. Other than Han not shooting first, I didn't mind the changes. One thing I didn't notice way back when, since I was 11, was that Leia doesn't wear a bra. She also went a little heavy on the makeup.