what is this i don't even

So when I got home, I looked at it and saw it was set for 1.5# loaf, but the recipe she used was for a 2# loaf. She said she wasn't sure what to use, the recipe said to choose a size, so she choose the middle option. Well, it was already going, so, whatevs.

It looked like the only real difference was a different cooking time and a little more rising time or something. So, you know, I thought we'd see how it went, it could maybe be rescued. 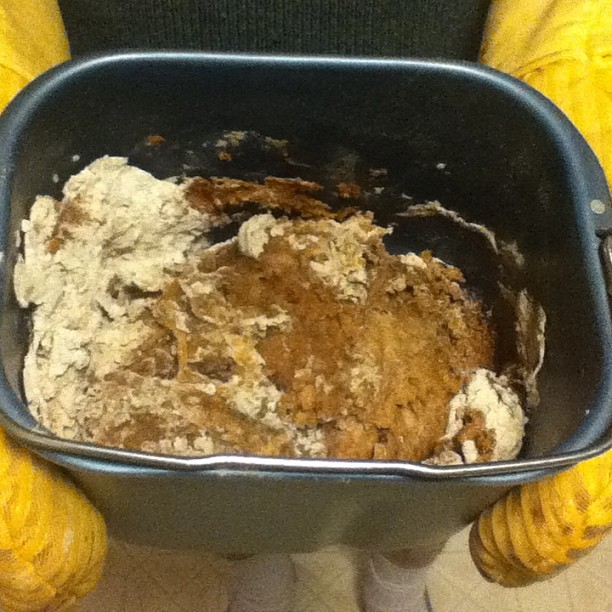 It could not be rescued. This doesn't even make any sense. She might've also lost count of flour. This was going to be my dinner. I don't know what I'm doing anymore.

Other: Internet is kind of sporadic. This isn't the best router in the world.

I asked on one of the relatively conservative sites I hang out at whether part of the reason they have their guns is because they might have to use them against the government or police, and under what circumstances they would do so. I thought I'd ask because it's kind of an  undercurrent of a lot of rhetoric and I kind of want to see it explicitly addressed.

Somewhat inspired by the discussion with LaPierre in the Senate.

So anyway the professor of one of my classes keeps going to the hot water pot in the lounge to make tea at the same time as me. He keeps trying to get me to try his tea (PG Tips) that he keeps there, and I feel like it's awkward to refuse but I like mine more.

Sen Chuck Grassley (R-IA), whom I generally disagree with, did something I agree with today: he sent a letter, along with a Democrat senator, asking why nobody from Wall Street has been prosecuted.