Lots of things going on lately.

Biggest news is that I finally got through my private pilot (airplane, single engine, land) certification at the very end of August, so that is a relief.  I've only gone flying once since passing; I took MSO up to the closest airport with a restaurant (and a pretty good one, too, although their website is horrible: http://www.southernflyer.com) last Sunday morning.  The weather was pretty awesome as the first cool front of the season had just passed through, but it was still pretty bumpy on the ride back which she did not enjoy.  Traveling places by small airplane together is probably not in our future since she had to take Dramamine before the flight and even though it was the "less drowsy" formula she still passed out after we landed back in Houston and had to nap for a couple hours that afternoon, so the idea of flying down to Rockport for bird watching for an afternoon doesn't seem like it would work.  Perhaps its for the best as I definitely can't afford to fly as often or as far as I would like to now that I can't justify all the flight time as just part of getting the certificate.

In YOLO news, I ended up buying another bike (my third in less than two years and my second in less than six months, for those keeping score) on Saturday, although it was not that crazy as it only cost $225.  A used single-speed messenger-style bike like all the cool kids are riding these days (although not a true "fixie" as it does have a freewheel - I'm not quite ready to have to brake with my legs, thanks).  Drop bars plus fatter tires equals a solution to my dillema of wanting to train my body for the road bike riding position, but not wanting to bash up my beautiful road bike tires (which I imagine would be rather costly to replace) on Houston city streets, which is where I ride most of the time.  I was already looking at some of the cyclocross bikes I see people riding on some of the group rides I do with interest, so it wasn't totally out of the blue.  Also, this lets me just keep my hybrid at MSO's place so when we want to go riding around her area I'll have a bike there ready to roll, so to speak, although the problem with that idea right now is that her bike has a wonky chain that skips when she has to pedal hard, and I'm not sure when she'll get around to fixing it.  I hope soon because we're entering the window of opportunity for good bike riding around here - not too hot, not too cold.

Now that I'm through primary flight training I really need to refocus on diet and exercise.  Let's look at one year's worth of physicsdiet.com data: 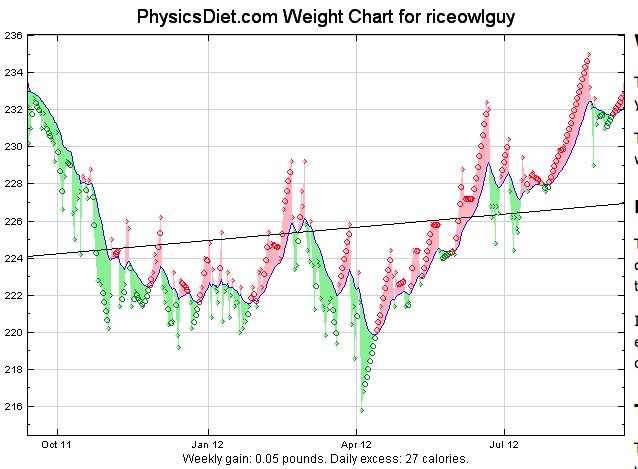 Not good.  Not bad, really, given all that I've had going on, but not what I want to see.  Between this and all my squatting at the gym, my pants are all getting tight again and I really don't want to have to go buy new pants going in the wrong direction again.  Most of it is diet, not exercise, but the likelihood of my being able to sustain weight loss or even maintain a given weight through eating habits alone seems improbable.  Plus, I would much rather exercise a lot and eat normally than have to diet AND sit around being hungry all the time.  Unfortunately, due to my ongoing ankle tendonitis problem, I had to stop playing tennis back in June, so I no longer have that going on, and I also haven't been walking/jogging/running as much, again because of the ankle.  Cardio at the gym gets old fast, but with available daylight for cycling waning, I will have to suck it up and do SOMETHING to burn more calories (unless I figure out how to ride in the mornings before work, something I haven't tried - I figure people in cars are going to be less forgiving about sharing the road at that time of day than at night).  Swimming would probably be the absolute best but I have a hard time getting into that.  The scenery doesn't change AND I can't listen to music.

I've started hosting a regular weekly D&D (4th ed, Dark Sun setting) game at my place.  I'm almost completely brand new to D&D and the guys I'm playing with are all super experienced veterans, but so far it seems to be working out just fine.  Two of the five people are the guys that I lift weights with so we make kind of a bizarre picture standing around the squat rack, talking about murdering people with crossbows and surrounded by confused gym rats.

I'm not participating in any kind of choir or theatre right now and while I miss it somewhat I am really happy right now not to have to worry about practicing music in my free time or conflicts between rehearsals and fun things I'd like to do on the weekends.

That's it for now.  In a few months I should be able to post an update showing the graph going in the right direction again.