By BadDoggie (Tue Jul 05, 2011 at 06:09:00 AM EST) Berlin, rain, shithole (all tags)
For no really good reason sugar spun and I decided to fuck off to Berlin with the puppy in tow for a few days to meet up with various friends including Hulver and rebound rabbit. It was the second time in the capital city for both of us.

We found out what we already knew: we really like living in Munich.


Berlin is ugly, pretentious, and so rude their people make "normal" Germans look like fawning staff from the Waldorf Astoria. Despite being Germany's largest city (with a whole 3.6M people), shit's cheap (especially rent). Most shit, but not hotels.

In typical German fashion, they are beyond overstated. The gay pr0n shop named:

was just too subtle, so clearly what was needed were some giant outline cocks on the front windows, pointed tastefully into the leathermen mannequins' mouths.

The weather makes England look like Mallorca. It only ever stopped raining long enough to get us to walk far enough away from shelter (like halfway between the Brandenburg Gate and the Sony Center) to catch us out again. Like here, where it started pissing down on us again right as we started getting near the Brandenburg Gate. 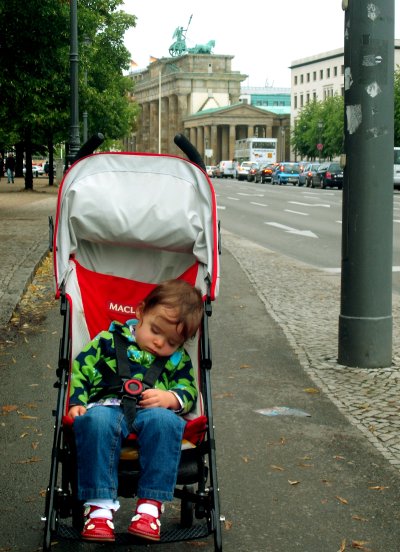 We did find a Chinese restaurant up from the Zoo called Good Friends which, though very pricey, was very good (primarily Hong Kong style with a limited á la carte dim sum menu). We also found a Vietnamese restaurant called Alapha around the corner from our third and final hotel. Small but clean & modern, family-run, the prices were fair and the food was excellent. Everything was cooked fresh and as an indicator of quality, they use mild Asian cilantro instead of the strong (and cheap) Western stuff.

As good as those two restaurants were (and we went back to both), they are the diamonds among the giant steaming pile of a city, home of such tourist attractions as the Currywurst "Museum". You would think that something so absurd as a museum dedicated to currywurst -- especially one that charges €11/person entry -- would be fun. You might also think that it would be impossible to suck out every last drop of the fun and amusement of a show like Total Wipeout can provide, a TV program based purely on the concept of schadenfreude. You'd be wrong on both counts.

The "museum" is about the size of a 100-seat restaurant and, unlike the product it claims to celebrate, is mostly filler, from a wall with a few TV screens running loops of TV scenes which took place by a currywurst stand, to a giant display of spices which might -- might -- be used in the sauce, though actual information (or for that matter, display) only existed for a few of them, the rest being some graphics on the wall.

There was one little shining moment in there during which we accomplished the impossible: getting the best of a German granny. The Puppy was wearing her squeaky shoes and occasionally not being bored out of her gourd when some Oma came up to us to tell us how loud the squeaking was. "Yes," I replied, "She's a baby. Babies make noise. Should she run around barefoot?"

The granny tried to respond but couldn't, probably because she'd already chewed out some other couple earlier in the day for their kid's feet not being well-wrapped enough. She stormed off.

This is the second-most visited "museum" in Berlin. Number one is the Beate Uhse "sex museum", something you also don't bother visiting even if you're drunk.

Brunch on Sunday with hulver & rr was nice and the sprog was well-behaved. Afterward we all headed toward the Zoo where our intarwebs friends presumably went off in search of bicycles (or possibly to a museum we might have recommended during the meal). I knew the clouds were waiting for us to drop all that coin on Zoo entry tickets to open up so we hopped a bus hoping we'd stumble across something cool as we usually do or at least catch a couple of good photos of the Puppy. Clouds got us anyway, having opened up about 20 seconds before the above pic was taken. We headed back toward the Sony Center.

There was a Lego World in the place which sold itself as kid-friendly... without the caveat that your kids had to be able to fend off rambunctious and violent children at least twice their size. No mention that the two cool rides had minimum and maximum heights, so the toddler couldn't get on them. Which left us having paid €30 to listen to a load of screaming brats as our Puppy was banished to the Duplo pit in which she also couldn't play because of the ten-year-olds already in there. And the kids were, by and large, little more than mild reflections of their shitty parents.

Warning: Berlin Tegel (TXL) is a truly shitty airport which has the gall to set the Coke machines to €3.30 (even Munich only charges €2.80 in the captive areas). Info staff cheerfully listen to your questions, then consult other info staff with whom they discuss the question. After this the staff member you can't see flips a coin and you're finally told to do the opposite of whatever it is you need to do.

Tourism in Berlin is basically the Wall itself and things related to it. That's right, the one thing they wanted gone is the one reason everyone keeps coming to visit. They must be kicking themselves for having torn it down.

Berlin: Why wait for another war to raze it again?