Yet another vacation diary


It was a good vacation, real good, good good good. I want to go back.

I liked this year's pre-vacation minivan maintenance (spark plugs and wires) much more than last year's (sheet metal, rivets, bondo, sand, bondo, sand, bondo, sand, prime, paint). It's unlike other vehicles where I've changed plugs, it's a transverse mounted V-6, so three plugs were really hard to get to. I had to remove the windshield wipers, top cowl, and lower cowl to get to them, since I don't have a lift and a grease pit to stand in.

Later we removed the two person bench seat in the minivan, and brought the three person one forward. We planned on coming back with one more kid than we left.

The nice thing about vacation a few hours away is you don't need to leave very early to get there at a decent hour. We even left too early, getting to Buttermilk Falls State Park 45 minutes before the cozy cabin was ready, despite the GPS steering us to the wrong part of the park, and causing the minivan to fill with the smell of boiling DOT3 on the steep, narrow drive to the right part of the park.

My prior state park cabin experience was at Alleghany, where they had squarish cabins with a gas and a wood stove. These were narrower, with electricity and a refrigerator. 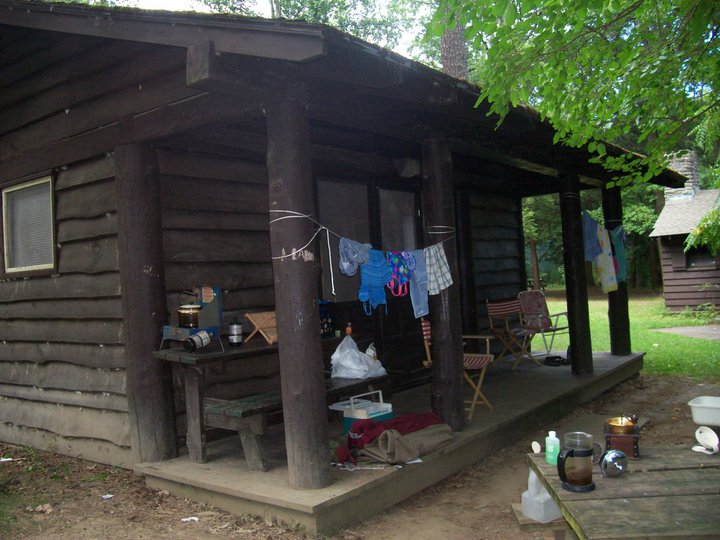 I used the manual coffee grinder most mornings, as the electric would wake the kids up. Once fourteen year old was up early enough to try it. The nine year old and her cousin tried it a little, too. 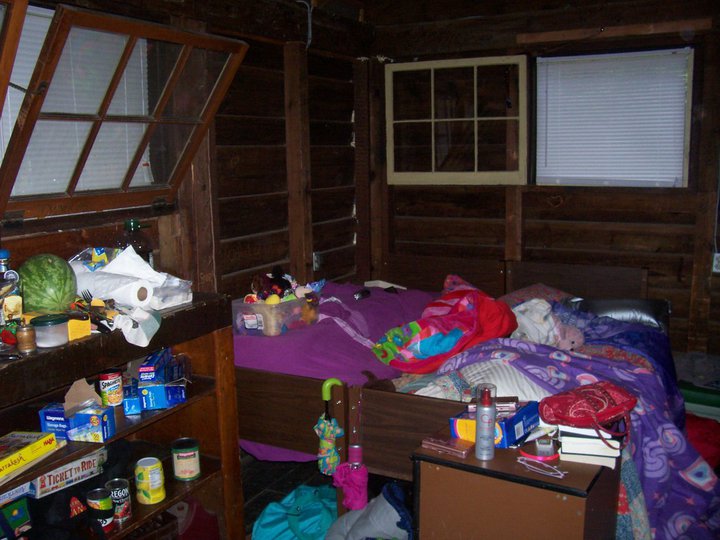 A word about geography around Ithaca, it's lots of eroded sedimentary rocks, it was once under an ocean, and then the glaciers gouged out a bit.

We ended up hiking four gorges (for generous definitions of hiking), Buttermilk was the most amazing, Taughannock was the grandest, the Ithaca Falls gorge was a nice short hike, and we only went 100 feet into the one separating Cornell from Collegetown, it was barred off for renovation. 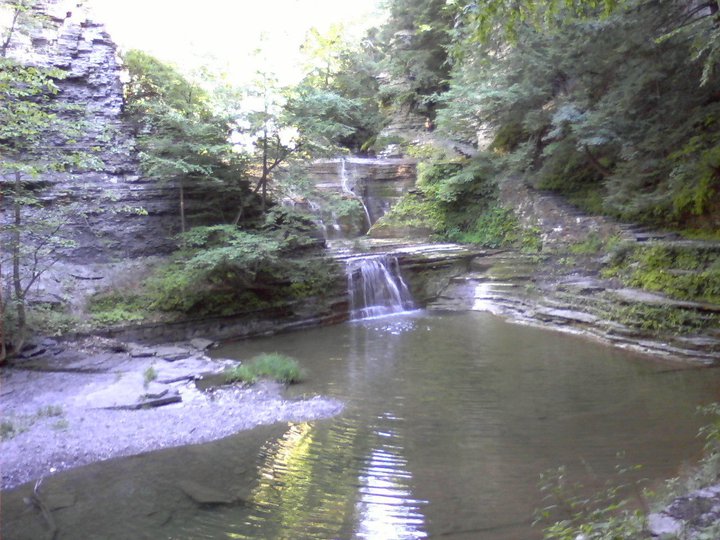 Buttermilk Falls is a small creek that's damned near the road to make a brisk swimming experience. The gorge trail is a CCC artifact, and at times very steep. Fourteen year old and I did it twice, Mrs. Ha and nine year old did it once, grudgingly on nine year old's part. We did a little wading (against stenciled warnings) but never got to sit under a waterfall, though we saw others doing it. The gorge is narrow, and beautiful, the kind of place Tolkien would write about. The geography is impressive too, lots of shale, and several layers of siltstone. 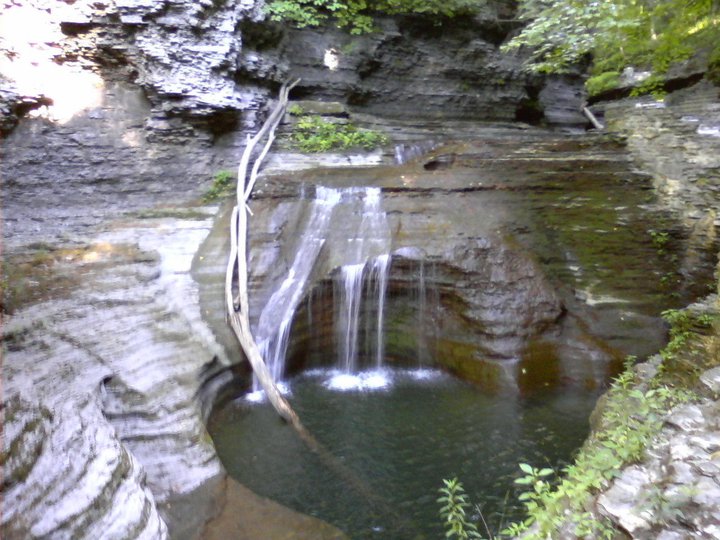 I should mention we warned the kids that people in Ithaca are liberal, and it might not be unusual to see topless women, or skinny dippers in the gorge. I think we even mentioned a little of our own history in that regard. The week went without any skinny dippers. I thought I saw a topless woman in the Buttermilk Falls pool, but it was a guy with moobs. Ewww. Ithaca Falls is a short walk to a very impressive and wide waterfalls. You can even see it from the road. Again, fourteen year old and I did it twice, the second time we brought the rest of the family, and my sister_in_law and my neice. The SIL stayed with us one night to drop off the niece, who stayed with us back to Rochester for a few more nights. 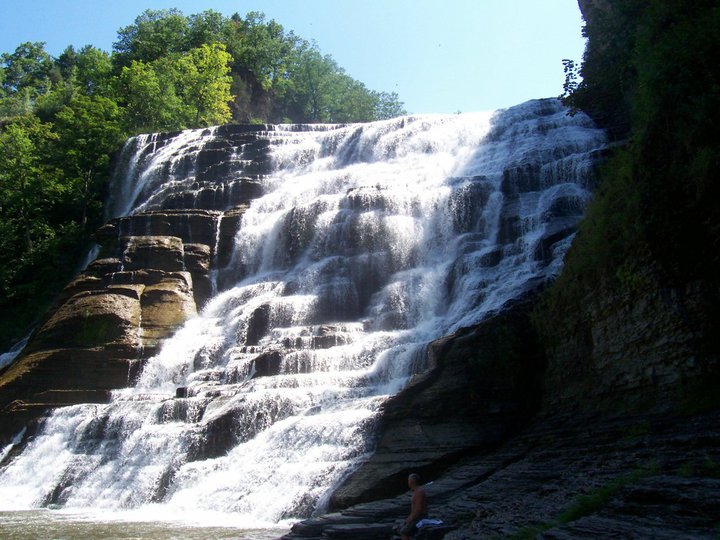 Ithaca trivia: The area around Ithaca Falls is fenced for for environmental hazards in the form of lead. At one time it was used for shotgun testing from Ithaca Arms. 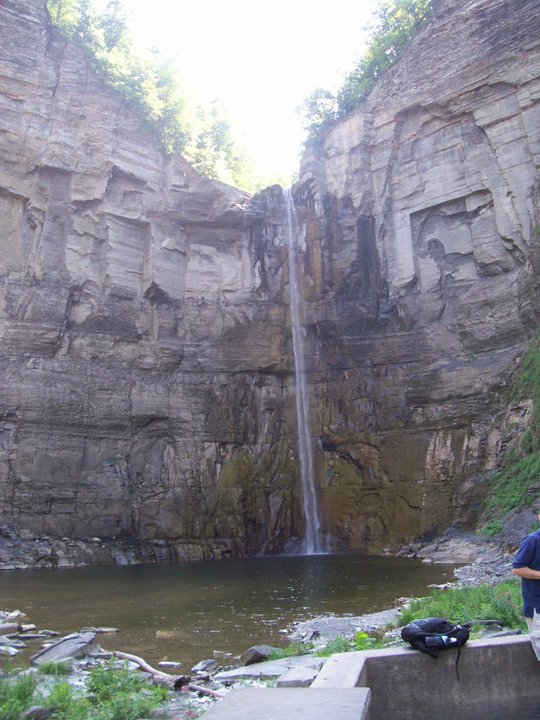 Taughannock Falls is a large gorge, at it's deepest it's 400 feet deep, the waterfall is the highest in New York at 215 feet, and the gorge is very wide, maybe 500 feet at it's widest. It's a nice example of microclimes, the south facing gorge wall is dry and hot, the north facing gorge wall is cool and moist. The four of us started down the riverbed, until nine year old took off her sneaks to walk barefoot in the slippery, slimy water (I was wearing Tevas, fourteen year old was wearing water shoes). She fell, it went downhill from there, and she and Mrs. Ha went back and drove to the beach on Cayuga Lake. 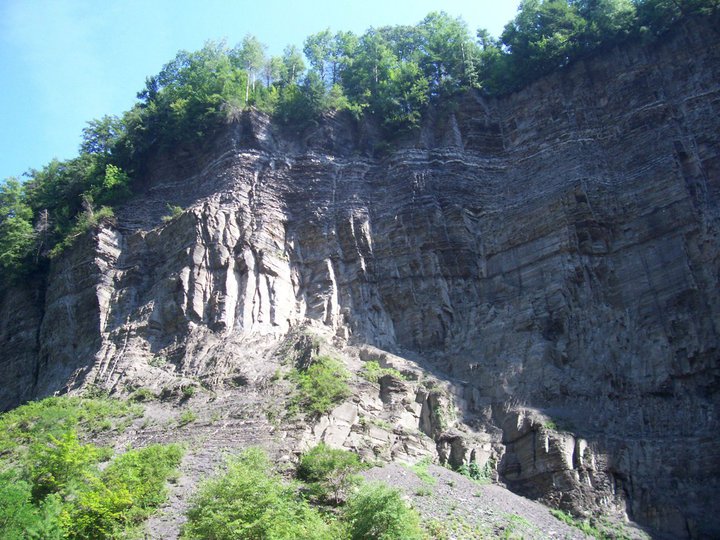 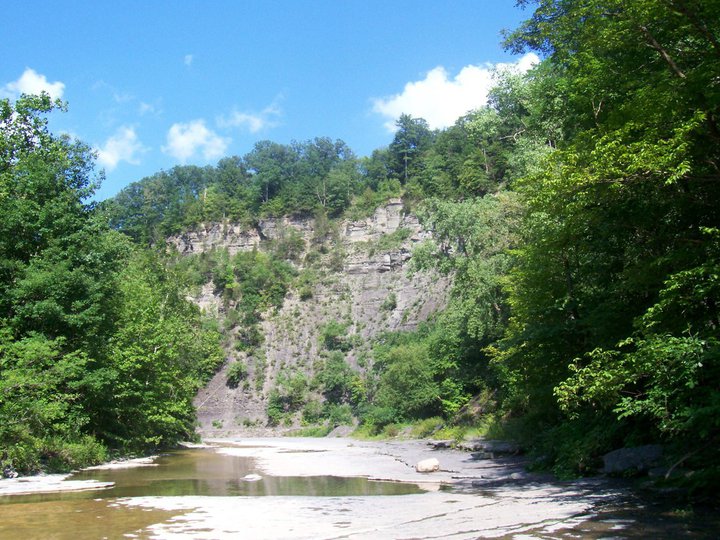 The beach was nice, a stony one on the shores of Cayuga Lake. I was a little unnerved by the seaweed in the 8 fot deep zone, a family friend drowned when I was a kid due to a weedy pond, and treading eight foot deep water with weeds brushing against my feet, unnerving.

Cascadilla Falls is the gorge that separates Cornell from Ithaca, and the probably the one with the most suicides, based on new and high fencing. Unfortunately for us, it's being extensively repaired, all we got were glimpses of an intriguing gorge beyond barred and locked gates. Bummer.

We did a bit of shopping, too. There was a Salvation Army right outside the state park, we went there twice it was so good. I was psyched to find a cheap copy of Rand's Anthem, I think I can read it. I could only get a quarter of the way through The Fountainhead before giving up. After the hundredth time of being told how Roark was perfect, every one undermensch, all with bad writing, I gave up.

We hit a consignment shop on the Commons, it was too pricey for me ($17 for a pair of jeans?), but fourteen year old and Mrs. Ha got some stuff. It's a start on back to school shopping.

We did not eat at the Moosewood, we figured it was too pricey to take picky children. What would they have charged for plain pasta with butter, $10? We may go there over Labor Day, Mrs. Ha and I, but that's a topic for another diary, involving several weddings, including someone frequently mentioned in previous diaries. In other food news, we ate a lot of pizza, often at cheap divey slice shops, and once at The Nines, when my parents came down.

Right, another advantage of a close vacation is visitors. My parents came down one day to see the cabin, then we went off to The Nines for very good pizza, and some garbage picking (a white enamel kettle).

Like I mentioned, my sister_in_law came down one night with her daughter, spent the night, and then left us with her daughter. The daughter is nearly nine, so she gets along very well with nine year old. The SIL and BIL had a wedding, so we agreed to watch her for a while, which stretched out into three days. We ended up wandering around Ithaca, me, Mrs. Ha, her sister, the three daughters, Big Love indeed.

A last highlight of that Commons trip was seeing the true scale model of the Solar System, though we only got out to Uranus. We had lots of fun with the name, too.

I finished three books on vacation, Young Miles about Miles Vorkosigan, Guadalcanal Diary and Hellbent for Fury short stories set in WWII and Korea, involving what you'd expect, plus tales about a cook, chaplain and engineer.

A few months ago I was told the Vorkosigan saga was great science fiction.  A short read on wiki left me the feeling that I had read parts of it before, the Quaddies were very familiar, maybe from the time in the 80's when I read the pulps. Wiki also convinced me to try something with Miles Vorkosigan in it, and wonder of wonders, I bought a new, full price book at B&N, Young Miles. It was good, Miles is a young hyperactive, intelligent cripple growing up in a militaristic society who transcends his limitations. After finishing it, I recalled I had read one of the novellas when it was in the pulps,   the scene involving violating network security with two computers facing each other convinced me.

Guadalcanal Diary, a reporter's diary of his time on Guadalcanal during the beginning of the campaign.

Hellbent for Glory, short stories set in WWII and Korea, involving what you'd expect, plus tales about a cook, a chaplain and an engineer.

Stay tuned for my next award winning diary, including but not limited too The Last Stand, The Thousand Mile War, the Haunting of Molly Hartley, Paratrooper, Xenocide, internet glasses, Weddings, Open House and less!