So here is this week's chart: 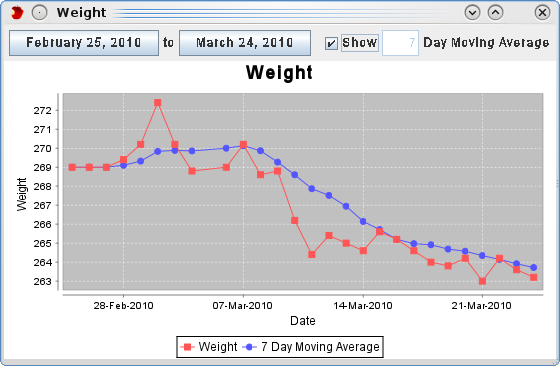 That corresponds to a weekly weight loss on average of 1.13 pounds and a caloric deficit of 567 calories.  Biked 35 minutes tonight and last night, so we'll see how that goes.

Gym has been packed the last two days, not sure why, maybe the cold snap we got scared people inside again.  Oh well.

A friend who just moved called and we were talking about cable Internet and I had him go to speedtest.net so I could figure out if the $34 a month he was being charged by Comcast was a rip off.  Apparently he's getting 22M down and 5.2M up.  His upload is faster than my download.  Of course I told him that with Comcast's history he may have just peaked on speed.  I'm jealous.  And he's in a rural setting too.

Really not all that happy with being one upped at work.  I may not be all that smart, but dammit when I say something that I know is true, I do so because I've already double checked and KNOW IT'S TRUE.

Also not really liking the response I get back to saying 'wow, you really think Project #72626 will keep 6 people working 8 hours a day for 3 months straight?"  The response was "We need the work, why don't you want to work?"

Sure I hate the months of no new work at all as much as anyone.  I've said that it's stressful to be sitting all day doing nothing.  Bring on the work. But answer my question, more explicit for ya, 'What makes you think that a simple 6 page web page with no database backend, is going to keep us balls to the wall busy for the summer?'

It's not so much I even dislike the questioning of my work ethic, it's just that every thing I say is never addressed and an unrelated question is always posed to me, that if I don't answer in the right way, makes me look like an ass.  Some days I just ignore it and others I just want to scream.

It's bad when it's one person, it's worse when it's two.  I try not to get into discussion in a group if those two are in the group.

Monday was a personal attack, that meh.  I was talking about the headache and upset stomach I in the afternoon after eating, and how it ruined my Saturday plans.  I think I said something like I think it was something I ate because I woke up at 10ish felt fine, did things, at lunch and then around 2 or 3 the headache etc came on. And one of the persons snickered and made a comment like "yeah you don't get headaches from eating something,  You got drunk Friday night."

It just flipped my shit for some reason.  Sure I did drink, 4 bottles of beer, but I've been hungover plenty of times, and it's not something that manifests itself at 3 in the afternoon after I've been up for hours.

And I don't even think it was a case of 'you drink and you're bad'  I think it was more along the lines of 'I can drink every night and I still did ALL 20 things on my TODO list the next day'.

Yeah.  I'd rather be hungover and not be a functional alcoholic.

It's funny, as I look at my latest PT bill, how when the insurance company is on the hook for 80%, they get all kinds of discounts and end up paying well under the quoted 1100 bucks.  While last year when I was on the hook for 100% of the bill, there just weren't discounts to be applied.  All in all though this bill was a lot better than the last.  Last was 523.  This one is 119.  I am not entirely sure that's it, though.  I budgeted 600 for this bill, so I should probably budget another 500, just to be safe.  Maybe by July I'll be able to get back to my aggressive savings plan again.  HA!

I've been watching CSPAN1-2-3 at work this week.  Wow.  The House seems like utter chaos while the Senate seems so calm and reserved.  I wonder if Reps who become Senators have a hard time adjusting?

Well it's gotten late so I should post this.  I think I'm gonna try to firm up my Vermont plans a bit this weekend.  Work some number as it were.