I was just listening to the 911 tape of the guy in San Diego who was driving an out of control Prius.  The operator asks if he had tried neutral.  He said he had not.  Interviewed later he said he didn't want to put it into neutral because he had never dealt that car's transmission before and he didn't want the car to flip.

I'm no car expert but. . .  can a car flip when put into neutral while moving at high speed?  Back when I was a wannabe hyper miler I used to slip into neutral on some large hills.  I never felt that the car was going to flip.  Thoughts?

So Liz Cheney wants to out terror suspect defense attorneys?  Man, the constitution really was an elective for these people to read in law school.

I did not go to the gym last night and I doubt I'll go tonight.  I felt of last night, and slept.  This morning the sore throat was still there a bit, so I called off.  Slept some more.  Now I'm sniffly and sorta light headed.  I was home amongst the nephews and niece, so there is that I suppose.

I started my taxes.  So far I'm owing money.  This is no surprise as I set my W-4 up for this.  I had some ING interest so that amount will go up a bit.  I also still have student loan interest and I think I can take advantage of the savers credit because I opened up a Roth via ING last summer.  It'd be nice to just break even.

So for lunch I've been mixing it up a bit and taking a tortilla with peanut butter and pumpkin as the filling.  It's better than you would think.  The pumpkin is bland, but the peanut butter adds some sweetness.  My only worry is that a 1/2 cup of pumpkin is 300% of one's RDA of Vitamin A.

Had a bunch of nibbles on OkCupid and even got a few more replies.  And then nothing.  Frustrating.

Took some photos of the catalpa tree the electric company is going to cut down.  It is already pretty much hacked up.  It's been in the wires since I can remember, so I am not sure why they're taking it now.  They're also taking a locust up the road a bit but is not near the lines.  The refused years ago to trim the willow that was leaning towards the lines.  They've marked none of the pine trees in the neighbors yard for trimming even though 10 of them are in the lines.

A graph of my weight: 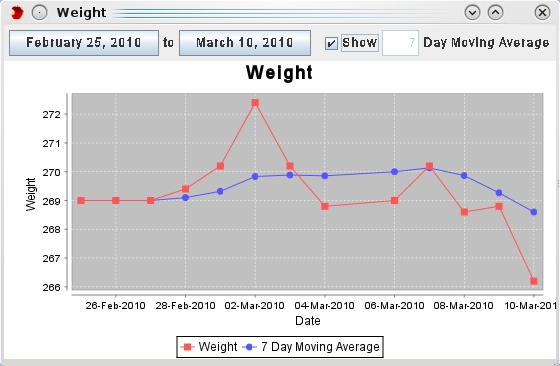 Anyway I should get back to doing my taxes, and wiping my nose.