Green, you know. Everyone does.

It came to our attention early in our relationship, toxicfur and I, that our experience of the phenomenon known as "green" is rather different. Below the fold, please find some thoughts on the subject.


There's such a thing as color blindness. Human eyes have sensors called cones in the retina, which have three dyes in them. Each of these is sensitive to a range of wavelengths of light. From the signals it gets from these sensors, and a lot of very deep magic the brain manages to come up with a perception of what color things are.

Note that we experience color as a property of objects, not the condition of illumination. It may be that the lighting (say, under low-pressure sodium street lights) contains very few of the photons actually required to render an object blue, but nonetheless, except in very low light (and even then; see Land) the brain manages to come up with a color to assign it. This property is called Color Constancy and Edwin Land had a lot to say on the subject.

Color blind people have a genetic condition, nowadays thought to be the result of a DNA mutation on the X chromosome for the protein that forms one (or more) of the retinal dyes. This leaves some people (nearly all male, given the location on the X chromosome) sensitive to only two (instead of the usual three) sensory inputs to feed the brain's color-generating algorithm.

Nonetheless, it's often possible for such people to function undetected in normal society. From the time they can talk, most kids are subjected to quizzing on what color things are, and so they associate whatever their internal sensation of a given object is with the syllable "green", and get a lot of praise if they get it right. It's an interesting philosophical problem as to whether or not my experience of green is like yours, but it's mostly unanswerable.

But not completely so. We can at least compare notes on where the edges of certain perceptions occur.

I have this hat... For me, it's brown. For toxicfur, it's green in some light. It has a sweatstain, and I should see about getting it cleaned. 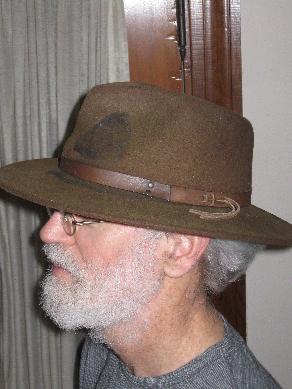 In a similar way, some examples of Army Olive Drab appear brown to me, without hint of green. At this remove it's difficult to know what the colors of uniforms were actually like in World War II, but here's a picture of Eisenhower in his dress uniform. Seems brown to me. Courtesy of google image search, may I present Olive Drab. Some of those seem are to me, others not.

Online demonstrations will all depend on your monitor, of course, as well as your eyes. That being said, here are a few interesting ones.

This one, for example, asks you to rearrange the tiles in each row for the most gradual possible transition.

When I'm done, in the second row, I see about 8 or 9 tan tiles (including the fixed one) followed by a range of greens. Kellnerin told me they're all green for her.

My results (see screenshot above), show cityscapes near the boundaries between tans and greens, and between green and blue.

When we're picking out paint colors, we're aware of the differences in our perceptions (or at least that such differences exist), and so we're trying to be careful to come up with combinations that seem restful or whatever to both people.

I once saw a paper on the presentation of quantitive information by colors, and how some "natural" or "spectral" color scales are in fact worse than useless when viewed by color blind people. Since it's utterly unlike everything else in my work e-mail collection, it's been at the bottom of my inbox for 10 years or more. I see the article is online. They present a map with a spectral color scheme, and as seen by a color blind person. The color scale goes from blue to yellow to blue again, which is not useful. They then suggest another scheme, which while different for the two viewers, is useable for either.

Note that the subject line is one of a collection of nonsense phrases we (the small group of geeks I hung out with) often repeated while we were high school students. Other examples include "Are these your Egyptian bells?" and "Are all of your clothes hand-made?"