New England has often been bad for the crown

Plus Harry Potter 6, The System of the World, We were Soldiers Once, Player of Games, Ernie's War, Albacore, Lobster Pie, casting a Paul over the trip, Hefewiezen boxed wine and premixed margaritas, Renys, VX8700, Life is good, carbernet vs toreador and more


That was a much needed vacation. The drive there wasn't too bad (compared to getting to Wildwood on a Saturday in summer) with the only heavy traffic getting onto I-95, and getting through Ogunquit, checking in at 3:00, giving us a driving time of 8 1/2 hours, including a few stops, one of which was a late lunch in Lowell at Wendy's, probably not the same one Jack Keroac frequented. After unpacking and a snack, we headed out to the ocean, finding free parking near Crescent Beach. It was high tide and early evening, which may explain the parking availability, but it still felt good. Later that night we ended up at the Wells House of Pizza and Roast Beef, for a very good thin crust pizza, and a glass of Longhammer for me. 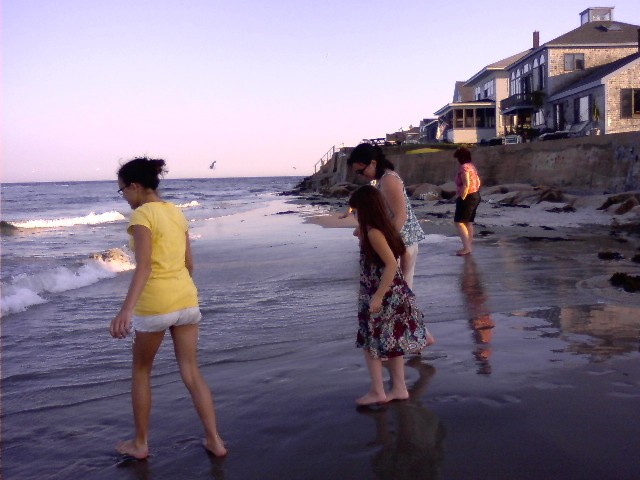 We rented a two bedroom cottage in the gated Beach Dreams development (lots still available, starting at $149k), which made for a better vacation than having to all sleep in the same room, heh heh. Eight year old was psyched that there was a TV with cable in their bedroom, in addition to one in the main room. The kitchen was good too, we were able to have four dinners at the cottage. There were two pools we could use in the main site, and we mostly used the smaller, closer one, with one trip to the bigger pool complex, complete with kiddie pool and hot tub. Eight year old was the biggest fan of swimming, but she's young enough to not have intermittent medical reasons to make swimming difficult. 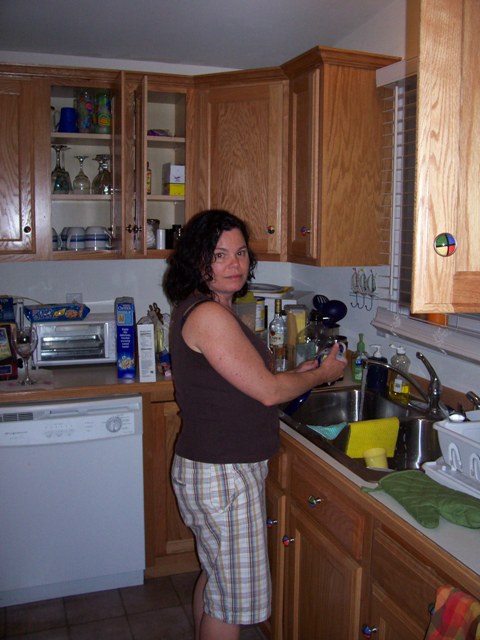 It felt odd to be living in a gated, HOA type community, and we didn't meet anyone there, we'd just see them in passing. It seemed to be equally divided into people from Massachusetts, New York, Vermont and Quebec. It wasn't near as social (or as crowded) as the condos in Wildwood. 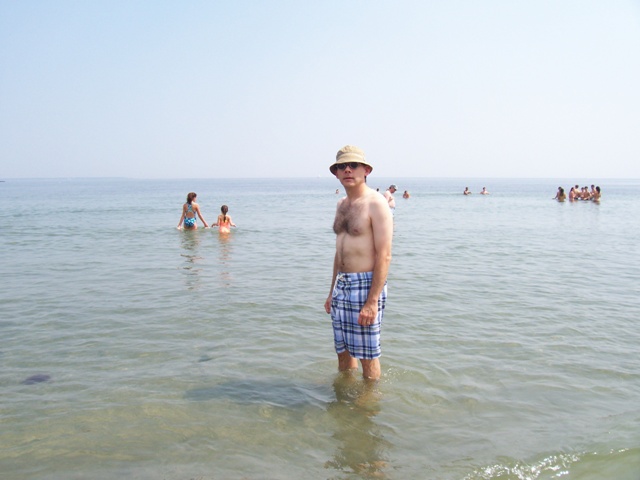 It was a hot week for Maine, and the heat drove us to the movie theater one day to see Harry Potter and the Half blood Prince, the first Potter movie I've seen on the big screen. It could have used more Helena Bonham Carter, but then, what couldn't?

In other media news, I was able to catch up on a lot of reading, since I didn't have the interwabs or laptop to distract me.

Right before we left I finished up Stephensons' The System of the WorldVolume 3 of the Baroque cycle, a big thick tome tying up the tales of Jack, Eliza and Daniel with more or less a happy ending. The Baroque cycle was a good read, but I doubt I'll ever reread it, there are too many other books out there, and it takes a big time commitment. Maybe I'll hunt down Anathem when I next need a Stephenson fix.

Next up was We Were Soldiers Once...And Young, a non-fiction book about the battle of Ia Drang in Vietnam, when the US first tried the Air Mobile concept that became the stereotype of the Vietnam War. It's an engrossing read that puts you right in the middle of the action.

Then there was Banks' The Player of Games, a Culture novel I picked up at a Goodwill a few months back. Banks is one of those writers you rarely see at thrift stores. It was a good Culture novel, set after the time the Culture becomes nearly omnipotent, so to allow drama the protagonist, the most famous game player in the Galaxy, goes to a barbaric empire outside the Culture where the Empire's culture is centered around a game.

When we got home, I finished upWarfare and the Third Reich, one of the books I garbage picked a month or so ago. It's more of an encylopediac look at the fighting Nazi Huns with different articles of different parts of the Hun fighting Nazis. Maybe I can trade it in.

Also at home I found Ernie's War at a Goodwill on Sunday, after garage saling, and finished it in a few days. It's easy reading, since it's newspaper columns. I like that he talked about the non-glamorous parts of WWII, including the engineers, the artillery, the AA batteries and the Ordnance group.

Our most frequent stop in Maine, aside from the pool and cottage, was the Hannaford Plaza, which in addition to containing a Hannaford grocery store, also contained the movie theater, a trolley stop, and a Renys. We liked Hannaford (thirteen year old had already been to one on her New Hampshire trip), it was nearly as good as Wegmans. Renys was cool to, a department store with lots of closeouts, prices were pretty good. I was delighted to find out that Maine allows grocery stores to sell booze, though you have to wait until 8 or 9 in the morning on Sunday. I picked up a box a merlot, and found it much easier to use than corks and bottles. In other booze news, I bought a four pack of Cuervo premixed margaritas to take, and one night I used one of the plastic margarita glasses in the cottage, even rimming it with sea salt. Mighty tasty.

Our second most expensive day was at the outlets in Kittery, where we bought a lot of girls clothing. It was probably cheaper than buying school clothes in Rochester. I broke a long running streak of only buying clothing for myself at thrift stores (save for socks, gloves, shoes and underwear) by buying a pair of cargo shorts at the Kittery Trading Post.

Our furthest day (aside from driving to and fro) was a day in Portsmouth, New Hampshire. We started with a mediocre Goodwill, then off to the Great Bay Estuarine Research Reserve, where the girls decided not to hold a horseshoe crab. They had a small salt water tank with a bunch of horseshoe crabs, a handful of green crabs, some fish, some sand shrimp, and even a lobster. Mrs. Ha did hold the horseshoe crab, the kindly docent's time was not wasted. The research center was nice, low key and informative place, we ate our lunch there at at shady table.

Next up were two recommendations of Mrs. Ha's sister_in_law, who go to Kennebunk nearly every summer. First,USS Albacore, a retired research submarine, the first tear drop shaped one made. This was also the first submarine I've even been on, and I found it very interesting, if cramped, hot and oily smelling. The girls have decided that a submarine career is not for them, even though current ones are much bigger (thirteen year old might have been swayed if there was a swimming pool, but that's only for Commie submariners).

For dinner we headed right into Portsmouth's quaint, crowded downtown to try and find
Portsmouth Gas Light Pizza. No luck, and the parking prices were henious, so we eventually found the free municipal lot, which was only about three blocks from Portsmouth's quaint, crowded downtown. We eventually found the pizza place, in a basement, and it was early enough for happy hour
specials, which made my pint of Pomegranate Wheat only cost $2.50. The pizza was darn good, and also thin, it must be a directly on the east coast thing. 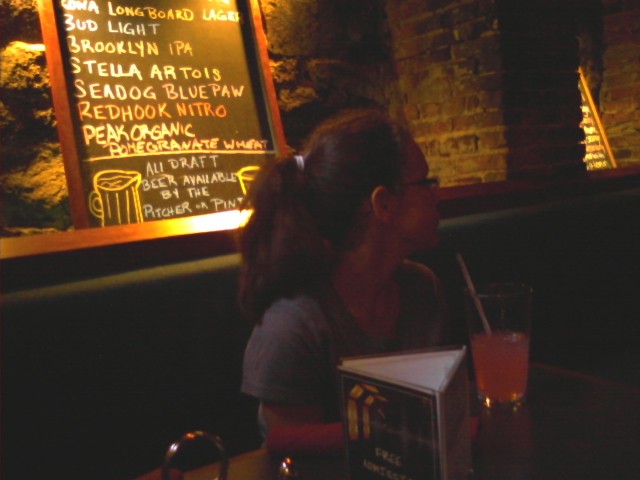 The most expensive day turned out to be Thursday, sitting on the beach and trying an extremely gummy black licorice Scotty dog. It took out two of my crowns, the ones I had put in about a year and a half ago. We were planning on going to the world famous Maine Diner later that night, so I thought I could just buy some OTC temporary crown cement and enjoy the dinner. Wrong. We got to the Maine Diner, and while eating a sticky corn muffin, I felt one crown come off, which I stored in a torn off corner of the menu. The food was very good, Mrs. Ha had lobster pie, I had Maine crab cakes, thirteen year old had pancakes with real maple syrup, and eight year old had chicken fingers and fries.

Definitely worth a return visit. 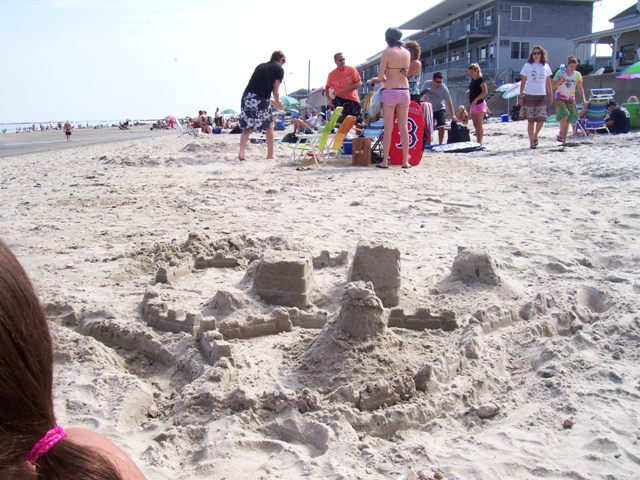 Back at the cottage, I decided to temporarily stick my crown back in, during which I noticed that I was missing my farthest back crown, I must have swallowed it while eating sticky corn muffins. Figuring that a new crown would cost $$$, I decided to do the fiscally responsible thing, and LARP Trainspotting. Several times. Many times. I gave up after three days, the crown was lost.

Now I have a rough and sharp temporary crown in my mouth, I'm surprised my tongue isn't bleeding.

I had been seeing Life is Good stickers around for a while, and I was wondering just what it was, perhaps some sort of mild, innocous cult? I found out in Maine that's it's a clothing brand, rather pricey for me. At least I know.

The trip home was quicker than the trip there. Somehow the girls discovered that Kevin Jonas is really named Paul Kevin Jonas, and were very amused at someone named Paul. They were not amused at London Calling, do you know how hard it is to figure out the Fader settings on a car stereo while driving down the road at 70 mph?