If it's Friday, I must be diarizing

By georgeha (Fri Mar 20, 2009 at 10:08:23 AM EST) kids, no Irish need apply, Guinness (all tags)
Plus, the Harry Potter Trio, YERIASCx17 at the Parade, replacement cell, floppies and less in this banal child centered diary.

Poll: What to do with numbers from a stolen cell phone?


Seven year old has been watching a lot of Harry Potter, and is trying to understand the relationship between Harry, Hermione and Ron, especially in Goblet of Fire. It's odd to see her so interested in relationships. I explained why Hermione was upset at Ron and Harry about the dance, maybe she'll get it by the time she's dating, unless one of her friends holds her to the marraige promises she's made (there are at least 3 of them). I didn't spoil how it ends for her, I told her to read the end of Deathly Hallows, but she asked around at school. Darn second grade spoilers!

Saturday was Rochester's Saint Patrick's Day Parade, and you couldn't have asked for nicer weather. We stood on the sunny side of the street, as usual, and despite being in the 50's, it was bearable. We ended up seeing about 17 people, mostly from the charter school, including three of the Porches, four of the Preschools, friends of the Porches, newspaper_girl ( we brought her) and a few others that don't have nicks yet. The city could have made a killing enforcing open container underage drinking laws, but I suspect most of the cops were in the parade. I saw this chick in the middle a few times. 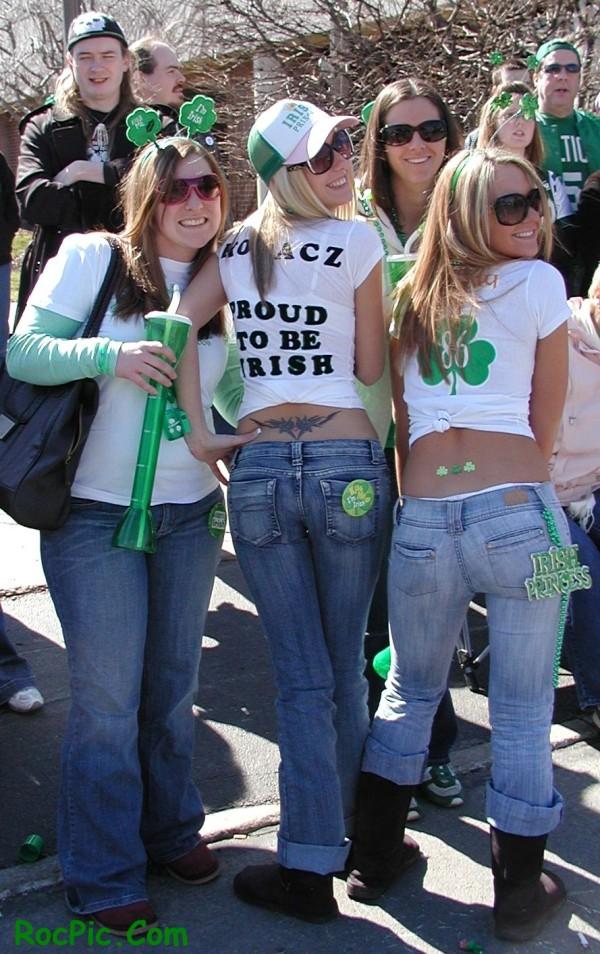 Twelve year old lost her cell, we're pretty sure it was taken our of her backpack. We have insurance, but the $50 deductible hit my budget hard, as does the additional $40 in charges. I would have canceled the phone immediately, but twelve year old is unorganized, it took us a few days to realize it wasn't in a different jacket pocket, or in a gym locker, or under the bed, etc. Next time I will check the online useage immediately.

Speaking of twelve year old, she needed to make some more Powerpoint slides for her English homework (when I was a kid, I never had to make more PowerPoint slides). She lost her USB drive months ago, so she was using a floppy. Well, we don't have a floppy on our fast computer, so I rooted around the computer burial ground in the basement, found two drives, and could get neither to work. Can I be forever done with floppies?

In other twelve year old news, she went to the middle school dance last night, and a boy on her swim team asked her to dance. She's more popular than I ever was.

In other, other twelve year old news, the weather has been so good the girls have been riding bikes after school. I ended up teaching her how to use the 12v pump. Seven year old is almost ready to ride without training wheels, she's ready now, but won't believe in herself.

The monthly gaming meet is tomorrow, I hope to attend for a few hours.