The only memorial for uncle R.

This was my uncle R. 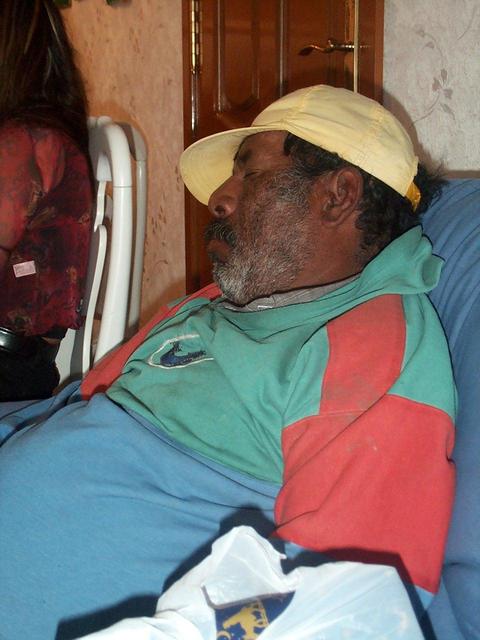 He was born sixty something years ago and had a bit of the rebellious and stubborn blood that is so common place amongst the descendants of the Purepecha people. Read about them, since long time they have been proud and brave.

He was born poor, he died poor, very poor. When people in rich countries talk about poverty, they simply don't know what they are talking about. Sometimes the only belongings he had were the clothes he was wearing.

He could not hold a job for long, he would beat up the managers that were abusing others, or the bully or harasser (because in Mexico, it is still OK to be sexist) that happened to be union leaders. Fate gave him brutal strength, that he used with fairness but ever to his disadvantage.

He was born with learning difficulties, but nevertheless he knew about the values of solidarity and justice.

He used to say "I may be a pendejo, but that does not mean I am a cabron, like that pinche politician, the President". And we all knew he was right, even my dad, the Presidential Guard, so maybe R. was cleverer than he thought.

He could not hold his house. When my granddad died (in USia of all places) his eldest sibling forced him to buy material for a house, which all the family helped to build. I still remember the long trips to the building site in motorbike, sitting in the lap of my uncle B, no helmet, the fresh air of those long sunny days hitting with violence my face, holding for dear life to the handle bars. I put a few bricks in place, I was really proud.

A few months later he exchanged the almost finished house for a VW Beetle that didn't even work.

After that something happened, because he didn't visit much any more. Most likely there was a row with the other siblings, perhaps they failed to see the poetry in such commercial exchange I suppose.

So we would see R only once a year at Christmas, and it was during one of those visits that R gave me the only present he ever gave to anybody as far as I know: a little portable radio, monostereo, in the form of a football.

What a delight! For months to no end I would listen, or try to listen to be fair, to very funny people like Mauricio, the posh, and Madaleno, the Indian, serious ones like the reporter Jacobo Zabludovsky, who is 80 now, and crazy ones, like Pedro Ferriz, talking about UFOs. I would listen to the brave Jorge Saldaña, who was a Socialist when it was dangerous to be so, or to Tomas Mojarro, the writer and broadcaster, who challenged and continues to challenge the people to stop demanding and start acting.

And what about the football matches? Those Sunday mornings at 11:00 exactly, ready to follow the Red Devils of Toluca while the lingering smell of a late breakfast was still permeating the house. What about Fernando Marcos, a cult and reactionary football commentator, that talked about opera while the match stopped.

You see? Maybe my uncle R was cleverer than he thought.

Years later, he announced, during a Christmas reunion of course, that he had got married, to a woman, Lupe, 20 years her senior. The fool! The fool!

Many years later, she nearing 90, is now alone.

But the offence of my uncle must have been huge, and Purepechas don't forget. Some of them keep old grudges for ever, and this was no exception.

So when the siblings were told that he has passed away, none of them went to help with the arrangements. Certainly he lives in one of the ugliest parts of Mexico City, where no taxi would dare to go, but still.

Not my cousins. Nobody. They let him to be buried by his elderly wife. You were dumb R. So Dumb.

And myself, unable to even send money to help. To whom?

So there you have it, I introduce you to R., accidental dreamer, fool avenger, the bringer of Hertzian joys. Gone. And yeah, that photo is the last Christmas party when I saw him, 3 or 4 years ago.