By BadDoggie (Wed Oct 21, 2009 at 07:53:23 PM EST) time machine (all tags)
I know I'm an old fart; most parents are. I'm still a bit more clever than you give me credit for, although if you're reading this when I think it's germane, your mother may well have already placed me in a nursing home and ensured excessive meds. Anyway, some years ago (tonight, as I write this) I had a mild epiphany.

I also posted a non-embarrassing, proud parent photo. Of you. At 11 weeks.


Only minutes before you were directed to this bit of writing (and I strongly suggest you don't read anything else I've written under this nickname), you declared I was the most horriblest, unfairest, terriblest, unloving, uncaring and most of all, totally stupid and not-understandingest parent in the world since the beginning of time FOR REALZ. OK, you probably didn't say "for realz" any more than I ever called my parents "squares" but you get the idea.

I didn't buy you that 80,000-credit pair of jeans which have the name of {ultimate designer of the century of the week du jour} stitched on the back pocket with micro OLED thread and you're upset. I know I'm letting my American roots show through and being a modern-day Torquemada by refusing to spend this month's gross earnings on a pair of pants you'll quite likely be trying to remove more often than I would otherwise hope (this "daddy" thinking always seems to override the "boy" thinking I used to have).

Where was I? Sorry, I just had to pop the binkie back in your mouth and stop you ripping your face off Robby-the-Robot style. As I write this you like the Binkie Game despite my trying for weeks to get you to stop playing it. The Binkie Game consists of you waggling your arms about like the aforementioned robot until you've knocked the binkie out of your mouth, at which point you start waking and screaming because there's no binkie in your mouth.

I'll make this fast because I'm on "night duty" and in the next half hour or so you're going to be awake to either feed or be re-binkified. Again. I should embarrass you with a picture of your diaper on a scale but I think this sentence has already done enough damage.

It's strange because you're really super-smart and advanced. The day before you turned 11 weeks old you were already able to grasp objects and move them, as you did here while Papa was building himself a brand new super workstation computery thing: 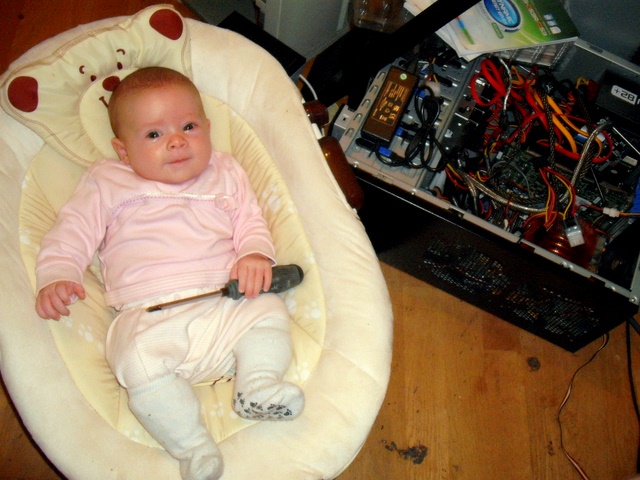 So, where were we? Oh yeah, nice things. You had nice things. Unlike Papa (who still can't have nice things because he always breaks them), you never wanted "nice" things. You outright reject nice things in favour of the truly awful, something that brings/brought a little smile to your old man.

OK, back. It seems I'm going to need to change you before I bring you in for the 2am feeding.

Umm... Nice things. That's right. As I type this I'm not quite senile yet, nor has your mother managed to find a complicit doctor. I'm pretty tired though, so forgive the rambling.

One baby gift we were given was a beautiful, bright white, hand-crocheted blanket made by your great grandmother "Happy" originally for your mum and then meant for you. Your Favourite Great Uncle C also gave us a very expensive Softest and Most Comfortablest Blanket in the World Ever. You rejected these out of hand, preferring -- nay, demanding -- to be wrapped up in a 30-year-old frayed flannel sheet which we generously named "The Manky Blankie", in large part because your mother insisted I stop cursing every four seconds, thereby preventing us referring to it as "that fucking rag".

Then there's the sleeping arrangements. Mama and Papa found a super-awesome Stokke crib which was expandable for when you got older (and considering how you like(d) to kick your parents while on the changing table, you clearly want(ed) to remain an only child to retain sole possession). Since money is fairly meaningless at the moment with the current economic situation I'm going to try and put it into relative terms.

The crib with all the trimmings and expansion bits cost about a full week of your dad's then fairly good pay. Sheets for the thing cost that much again here in Germany. Your gran was not only able to finagle a couple freebies from the company but also sewed a few more out of super-awesome 8-bajillion thread count cotton harvested, spun and hand-woven by the virgin children of some royal family. For only another half a day's pay we got the bumper and additional soft bits for the crib. At 11 weeks you have spent an entire five nights in it, not one of them without putting up a fight.

You preferred to sleep as the filling of a pillow sandwich, settled on top of a mushy German pillow, covered by a second mushy German pillow, unhappy if you could fight your arms out from between them in order to get your hands to your face to play another round of the Binkie Game. Total cost: less than one of your mother's 11:30p.m. McNasty Meals while she was pregnant.

So you see, we know what happens when you get nice stuff: you dump it for the crapola. And you're going to keep doing it over and over and over. You're only going to intentionally rip the jeans in a way that's totally different from the lame way old people like me used to rip their jeans in the 1980s because this is totally original, as will be the various designs and quotes you scribble on them with the Sharpie.

So here's the deal: you get to be smart. You wear the goddamned no-name jeans and get three pairs instead of one. Rip them however you want, write whatever you want on them ("My parents are fascists" never goes out of style), and be smart: scribble over where the stupid designer logo should be and when someone questions you, just be dismissive and say, "Pfft! If you have to go looking for the logo why bother? Are you some sort of globalizing capitalist or something?" You've just totally put them in their place.

See? Your old man isn't quite the idiot he so often seems to be, even if he has no fashion sense. But before I go to pick you up and take you to your mother in for the middle-of-the-night feed, let me appeal to the intellectual side of you I hope and pray you have: cut the shit and I won't show your friends this writing, and remember that the money we save becomes your inheritance.