New Orange Kitty still doesn't have a name, though I'm sort of leaning toward Calcifer, after the fire demon in Howl's Moving Castle. He is a little demon -- I can tell by the scratch marks on my arm.


We got home late yesterday, because it was my therapy in Harvard Square day. I meet ana in the office at about 6, and we go home with the car pool. It actually works out quite well, but it means the critters are left alone all day. One day every couple of weeks isn't so bad, but this was the first day that New Orange Kitty was left in the spare bedroom. I wasn't really worried about him, but I really wanted to get home and give him food and attention.

The first then when we get home, though, is to let the dogs out. So the dogs and I wandered around the yard. Rusti and I crossed the street to talk to the neighbors and read one of the signs that neighbor R put up to try to find New Orange Kitty's home, if he has one.

When I went back inside, ana told me he was missing. He'd torn a cat-sized hole into the corner of the screen and gone out the second story window (one level above ground level, for you who count floors different to how USians do). He had, I suspect, landed on the balcony outside that window and from there used the large maple tree to get safely to the ground. He has superpowers.

I went to tell R, so she could keep an eye out for him. "What a stupid cat," she said. "He just doesn't know when he has a good thing!" I also told her that he was male (we hadn't checked that the night before), and that he hadn't been neutered. More and more, we're certain he's a stray. While I was talking, I saw him, a couple of blocks down, cross the road. We called for him, and he popped out of the bushes, meowed pitifully at me, and started kneading the sidewalk with his giant (proportionally) paws. I picked him up and carried him home, I mixed a can and a half of fancy feast with some dry food, and Om nom nom nom. He's definitely hungry. All the time. He does interpretive dance next to his bowl every time I go into his room.

Even when there's no food, though, he's happy to just cuddle. After several years of trolling ana about getting a new kitten (I had three when I moved up here, and tried to convince ana that one more would be perfect), I'm really happy that ana and New Orange Kitty get along so well. They bonded immediately, and ana and I would both be pretty sad (but also glad, in a bittersweet sort of way) if he has a home to return to. 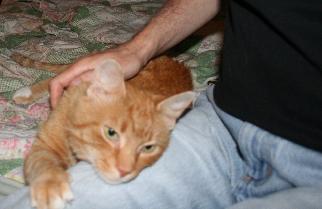 This is my birthday weekend. I generally love my birthday, but this year, it's really very sad. Last year, my mom was here for my birthday and we went to see the Blue Man Group and to eat dinner at Jacob Wirth's. She spent more than a week with me, and one of the things she did was to plant a bunch of stuff in my yard. One of those was a hydrangea plant. I was a bit worried at the beginning of the spring that it wouldn't come back. It did, though, and it's beautiful. 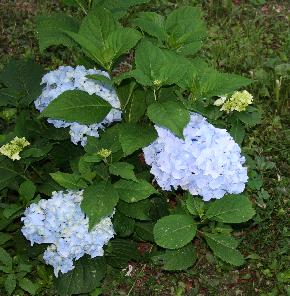