I have the two qualities you require to see absolute truth

What I'm Reading
Finished the sixth Inspector Rebus book: Mortal Causes. Excellent book: about the best so far I'd say. Has a complex as Rebus investigates Northern Irish terrorists and criminals, against the background of the Edinburgh festival. Pretty tense and witty. I managed to have a least a suspicion of what was going on this time, though I didn't guess the whole thing. Hopefully this series is just getting into its stride.

What I'm Reading 2
Finished America's Secret War: Inside the Hidden Worldwide Struggle Between America and Its Enemies by George Friedman. He's the guy that founded private analysis company Stratfor.

Has some interesting content, especially on what was happening inside the "intelligence community" and the US government.

From this, it appears that after the September 11th attacks, the intelligence services went into arse-covering overdrive and started flooding their superiors with scary stories about possible attacks. These were taken seriously by the governments. On this reading, the security scares are not attempts to maintain political control by creating public insecurity, but sincerely believed by the politicians. This book doesn't have much on the UK, but it makes me wonder if Gordon Brown possibly sincerely believes in his 42-day terror limit.

The book also has some interesting angles on what was going on inside the White House. According to this, the Rumsfeld/Powell disagreements were overplayed in the media. Eventually the State Department and the Pentagon reached an uneasy compromise on the Iraq invasion plan: a bigger force than Donald Rumsfeld wanted, smaller than Colin Powell wanted. However, according to this Rumsfeld was later sidelined, well in advance of his actual departure.

Also according to this, rather than "rushing to war", George W. Bush dithered for months over it.

However, the book has an absolutely huge problem in that it never gives any indication of its sources; not even hints about whether they came from intelligence sources or the media. Critically, it doesn't even give the time that they received this information. This lack casts everything in the book into serious doubt.

(The book also complains about an insistence on sources as a failure of US intelligence services. In Friedman's view, insisting on sources meant that analysts ignored valuable data which could only come from aggregating weak sources.)

In particular, he makes claims about the Real Goals of Al-Qaeda, which are notoriously hard to make out since they tend to say different things to different people. Friedman's view is that Al-Qaeda's primary goal was to institute revolutions in the what they saw as corrupt governments in the Moslem world. Believing that these governments derived their credibility from US protection, they decided to attack America to weaken then. This would then cause the US to invade moslem countries. which would then cause uprisings in the moslem world leading to the desired caliphate.

This seems like a curiously indirect way of going about things. That's why it would be nice to know the timing of this information. Did their Al-Qaeda sources say they wanted to provoke invasions before the Afghanistan and Iraq wars, or afterwards? To me, this interpretation seems a bit like an after-the-fact rationalization.

So too, he hints that the US was worried about making bin Laden a martyr, and so preferred a "bin Laden in limbo" option where he was free but isolated. Again, I'd really like to know the timing of this source. This also smells a bit like a "we didn't really want to catch bin Laden anyway" rationalization after the fact.

Some of the analysis also seems a little inconsistent. In the later half of the book, Friedman claims a primary motivation behind the Iraq war was that America was seen as hopelessly weak in the Arab world, and needed to demonstrate its strength. But if America is seen as so weak, why did Al-Qaeda think American support was so critical to Arab/moslem governments as claimed in the first half of the book?

Overall, I get an impression that this book is trying to shoehorn messy real-world events into overly-tidy frameworks of strategy.

This is especially true in the analysis of Iraq. Friedman presents events in a very top-down manner; almost as a chess game played between the leaders of various factions. In this view the Sunni and Shia insurgencies waxed and waned as they jockeyed for influence in the government. He assumes that the leaders have a high degree of control over what happens.

There's virtually no discussion of bottom-up factors that influenced Iraqi individuals; such as the economy, high crime in a law-an-order vacuum, infrastructure problems, instant unemployment as the giant state sector ceased to exist overnight. The strange insistence on immediately creating a free-market capitalist state isn't addressed either.

I find Friedman's interpretations much less convincing than those of Ali A. Allawi and Paddy Ashdown. In particular, Ashdown's view of interventions in general is that there is "golden hour" at the very start, in which it's necessary to for an intervening force to establish security right at the start. If that isn't done, local organizations will emerge and start challenging for power.

Overall, while this book has some interesting theories, it seems far too much like a rigid game-theory analysis of rational actors, without the messiness of the real world. The lack of any kind of source information makes this even less plausible. Friedman adopts the tone of unquestionable authority that you generally see in fortuneteller, and his business seems rely on similar techniques: making vague predictions that can be called correct in hindsight.

Coming soon
Found all the remaining Aubrey/Maturin books in a second-hand shop (Had the whole series, suspect a fan must have died). Don't think I'll read them all back to back though.

Have the next 3 Rebuses on order. PROTIP: if reading a popular series, look out for omnibus editions second-hand on Amazon: you get three novels but don't get hammered on delivery charges.

Next TTC course is Classical Mythology by Elizabeth Vandiver. She did their excellent course on the Aeneid.

What I'm Watching
Liked the last Dr Who two-parter. Steven Moffat still seems to have it. Not sure what'll happen when he takes over the series: might be good, or the novelty might wear off. We could easily get as bored with scary facelessness as we are with sexual ambiguity...

Museums
Went to see The Lure of the East: British Orientalist Painting at Tate Britain. Very good show: fascinating although only a couple of big brand names (Reynolds, Sargent).

Has a high entertainment value The paintings are self-consciously exotic and colourful, probably too shallow for a true art connaisseur but lovely to look at.

The cultural imperialist attitudes are pretty evident, but interesting. "A Frank Encampment in the Desert of Mount Sinai" shows posh tourist Lord Castlereagh languidly patronizing a local sheikh. You could almost use this as a textbook illustration of body language. Might drag it out next time I need to show conspicuous relaxation used to signal dominance.

On the other hand, there are a few paintings showing different attitudes. "Afterglow" by William Holman Hunt shows a vigorous-looking farmworker. "A Harem Visit" by Henriette Brown consciously undermines the traditonal soft-porn harem painting by showing active-looking, fully-dressed women and children. 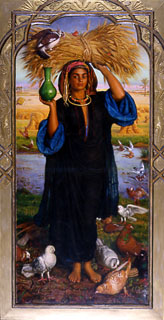 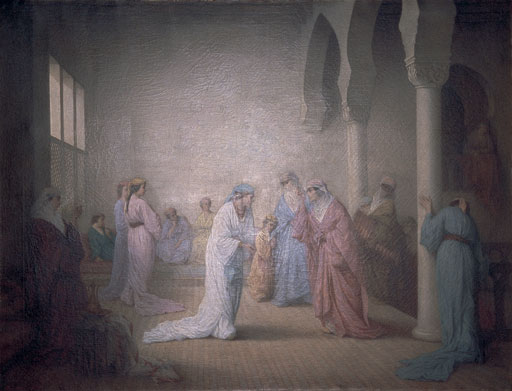 Well worth a look.

Wasn't too busy when I was there, but the Victoria line was closed which may have calmed things a bit. Child count regrettably high though: one spent at least half an hour in there deliberately screaming just to test the echo. Parents suck.