I'm trying to quit caffeine except for extraordinary circumstances 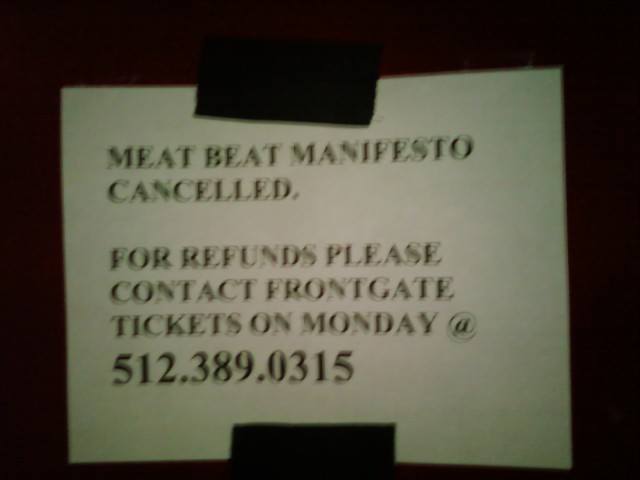 My oldest friend in the world, Kyle, and I went out for a bite of dinner and then to Club DeVille for the Meat Beat Manifesto concert on Saturday night.  The doors of the venue, really more of an outdoor / patio bar than a music venue, were to open at 9:00 and I think we showed up at 9:30 to an oddly quiet and uncrowded scene.  This was all explained by the sign taped to the gate out front.  According to the guy working the door at Club De Ville, MBM didn't feel well and they didn't want to play in an outdoor venue.  I was puzzled myself when I learned where they were playing but I went along with it.  The weather that night was really really good for an outdoor concert.  What a shame.

Not to be totally deterred, we went in for one drink and then met up with a number of Kyle's friends at The Elysium a block or so down the street.

The Elysium was great fun and I had lots to talk about with Kyle's buddies.  We spent most of the time on the patio which is right next to the street.  There were many many passers-by to comment on since The Raconteurs concert at Stubbs let out while we were there and we got to watch the long stream of young hip people file by on their way to 6th Street.
L
There was something set into the wall by the door that lead to the patio.  I couldn't tell exactly what it was but it looks like a little nook behind a glass window with various bar paraphernalia.  What caught my eye was the label tape affixed to the front of it: 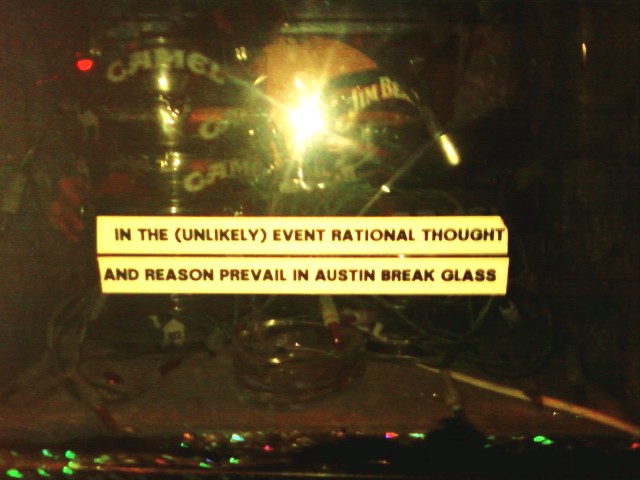 I can see the Camel and Jim Beam logos behind the glass but the message doesn't make sense in light of what appear to be the contents since this bar is all smoking all the time (and I smoked a big, nasty stogie while I was there) and they, of course, serve liquor.

Some time after 3:00 we made our way to Jim's restaurant for a little breakfast.  It's funny that I don't remember last call happening but I did quit drinking a while before we left.  At Jim's we were one of only about 5 tables in the place.  There were two or three adjoining tables of very rowdy people who made a grand show of being drunken idiots.

Despite the absence of a concert, I had a very good time. There was much more conversation instead and I'm always down for a good alcohol-fueled exchange of ideas, however slurred they may be.

This morning I called Front Gate Tickets as instructed but they haven't yet heard if they need to refund my $ or if the show will be re-scheduled.

Last Tuesday night I had to sleep in my office because Filip's snoring was keeping me awake and I'm too nice to elbow a sleeping person in the ribs and kick them out of bed.  I got a little bit of sleep but when I woke up on Wednesday morning to go to the gym, I didn't feel like making coffee and I felt awake enough to drive.  So, the thought popped into my head to see what it would be like to cut caffeine out of my diet entirely.

I realized that I couldn't remember a day without caffeine.  In fact, I had to quit coffee when I was having my teeth bleached in '99 and I just switched to Red Bull in the morning.

Wednesday was interesting.  I was fine in the morning but a little droopy; this is typical even with the large coffee I have every day.  The afternoon, however, was pure torture.  Even with coffee in the morning and tea or soda at lunch, I always feel like drifting off to sleep after lunch.  It's a clear-cut case of postprandial hypotension and I've been severely affected by it since I was a Junior in College (~1993.)  I found myself unable to sit at my desk and read.  I had to stand up to get anything at all done and in order to be really focused, I had to take a 5 minute walk first.  However, I somehow didn't have a headache until much later in the day, after 6:00.  I went to bed a little earlier than normal and slept very soundly that night.  The quick onset and depth of my sleep cycle can't all be attributed to the lack of caffeine since I was deprived from a very poor rest the night before.

Thursday I was a little more alert but the headache started shortly after lunch and persisted most of the day.  I took some over the counter shit for it but it still was perceptible.  I never get headaches unless there's something really wrong so even the slightest ache will distract me.  That night I was able to attend a short class session while being relatively alert.  This was after my after-lunch sleepy feeling wore off, though.

On Friday, my work group went to a big restaurant on the lake for lunch and team building games.  The activity kept me alert and I felt a little sleepy but very relaxed during the day.  When I got home in the early afternoon I spontaneously took a nap on the couch which is something I rarely can do unless it's after dinner.

Saturday was a little odd in that I was able to go to bed at a decent time on Friday and I slept late but still I felt pretty tired and even a little dizzy.  I ended up having two cups of real coffee at dinner that night in order to be up for the experience of a concert and a night of drinking (see above.)

Sunday I was a tiny bit hung over but still avoided caffeine and had a very productive day between church, knitting class, and chores around the house.  Last night I slept very well and today I feel a little groggy but I have my hopes that it will be a productive day.

One of the most interesting things about living without caffeine is that the tension I carry in my body seems to have eased some.  There are certain areas or muscle groups that I've always carried a certain degree of tension in including my shoulders and jaws.  I've tried in the past to consciously train myself to just relax but it never worked.  This absence of muscle tension has lead to some very interesting somatic experiences - in some cases it feels like blood flow has improved.   I'm surprised that I'm surprised by the calming effect this experiment has had on my mind and body.  I still love coffee, though, and I picked up a pound of whole bean decaf at the store on Saturday.  I know it's not totally decaf but it should be close enough for my purposes.

My plan at this point is to do away with caffeine on an everyday basis and turn to it only when I really need a boost like when I'm going out for a night on the town, going for a long road trip, and so on.

I am less than an hour away from finishing my first knitting project - a striped scarf.  I'll post pix soon.  I continue to really enjoy knitting class and will be signing up for it a month at a time from now on.

I was hard at work for over two hours on Sunday but my left wrist began acting up.  The carpal bones in both of my wrists pop out of alignment very easily (as do my vertebrae) and it really affects how much fine work I can do with my hands.  This is remedied easily enough by my Chiropractor.

My next project will be a hat for Filip.  I showed him the yarn I picked out for the project and he didn't have any objections.