Well, that was delightful.

As I reported, we went to Provincetown this week. When it became apparent that there was some time between deadlines, before the summer intern arrives, before the crowds arrive, I did some googling around and managed to snag a cozy little room in a B&B in Provincetown. On less than a week's notice, since it was before Memorial day.

The ferry trip over was a bit rough; there were 35 knot winds (evidence: the whitecaps on the bay), but mercifully following, and so while the boat was "pitchy" (as they're fond of saying on American Idol), it wasn't rolly or yawey so much. I'm prone to motion sickness, so with dramamine and minimal head movement other than to compensate for the pitch of the boat by nodding my head up and down, my inner ear was content that it was feeling what my stomach and eyes were telling it.

The B&B was totally delightful. It's been re-done in the last couple years; the hosts moved here I think a year or two ago from running a B&B in the DC area, took over this place from a widow whose heart wasn't really in it any more, and made quite a nice place of it. The hosts were full of useful information and recommendations, and had a decanter of the most delightful brandy. 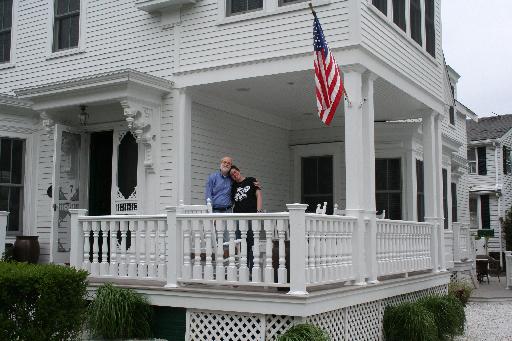 The weather was mostly cooperative. Chilly, especially in the wind, and we had no urge to take off our shoes and play in the wavelets, or even to go over to the other side of the peninsula and play in the real waves. Next trip, perhaps.

We climbed the Pilgrim Monument, a tower built about 100 years ago to commemorate the first landfall of the Mayflower, in Provincetown, in 1620.

Instead, we did the tourist thing, for the most part, cruising Commercial Street, people watching, shopping. We each got a massage. Mitch is fabulous; he looks like a body builder, and he did the two of us in succession, an hour each, and still had plenty of arm and hand strength at the end of it.

We got to watch the town turn from winter into summer mode. Many of the galleries and shops were closed when we arrived, but nearly all were open, or opening, by the time we left, what with the long Memorial Day weekend and summer season kick-off coming up. One exception was a shop with steam-punk style clocks in the window. The last morning we were there the proprietor was inside, madly straightening stuff up, waiting for the inspector to come so she could open. But not, alas, for us.

It was, in a way, like coming home. P-town is a place where everybody is welcome to be themselves, which is really quite refreshing. Makes one wonder why the rest of the world isn't like that.

'Twas a wonderful way to celebrate our third wedding anniversary.

I got some writing done, but mostly we just relaxed. Which was, I think, necessary. We're looking forward to a long weekend at home.

Thanks, muchly, to ad hoc and toxicfur's cow-orker for taking care of the dogs, and to iGrrrl and my management for letting us go on short notice.

Meanwhile spring has come to Bostonia as well. There's a flowering crab in our yard, which sheds a carpet of pink petals after it's done with the pink cloud phase. This is a violet trying to grow up through a drift of crabapple petals. 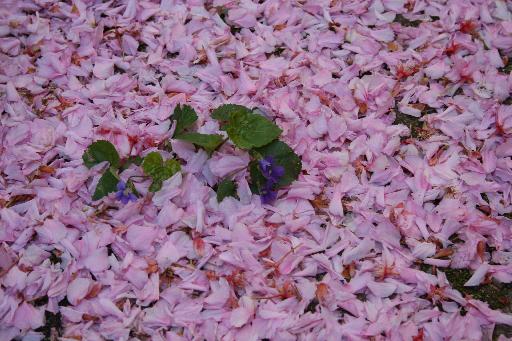