Plus, and now the waiting, the latest internet meme, Viking ships at sunrise, an Unmarried woman, Red Moon Rising, FPC, the Martians and less.

Poll: Will I get Black Snake Moan?


First thing you learn is that you always have to wait. Eleven year old auditioned for the good city middle school, in the major of theatre tech on Saturday morning, and did very well. She was the only girl to show up, the auditioner was impressed she knew what a mitre box was and what wet on wet meant in watercolor painting, and she was the first one done with the math test. Things look positive, though we won't know until the end of April if she gets in. She did seem excited about going there, even though it's her second choice.

Speaking of eleven year old, her new favorite computer activity is a FPC, First Person Clawer, some RPG based on Warrior Cats.

There's a new internet meme out there, lolcats are so 2007. I'm sure most you are saying LOLWHAT, O RLY, but the new trend is song charts. Like the one below. 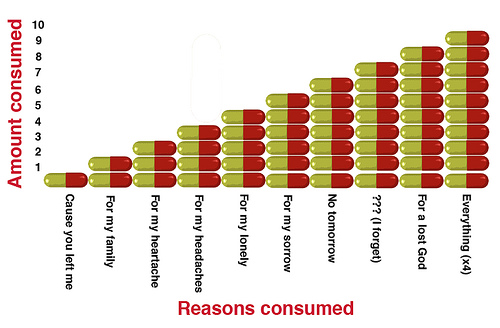 The taxes are done, again I'm getting money back that I had not intended too, adjusting my withholding is not easy. I did cut my refund nearly in half, I just need more tweaking on the state side. We may go on a vacation to Maine this summer with some of the refund money (paying down debt is unAmerican). Anyone know any good beaches in Maine or New Hampshire? I was impressed by York Beach when we visited it on our honeymoon, years ago.

Since the taxes are done, I can complete the financial aid forms for the Catholic school, and see what they can give us. School may not be settled until May.

We watched An Unmarried Woman last weekend. It's nearly a parody of a 70's movie, with all the ugly polyester fashions and sensitive man and relationship stuff, set to an orchestral Bacharachesque soundtrack (except then the saxophone wails). It drags on, too. Recommended if you love New York City, urban relationship angst and singles bars, body hair, or Jill Clayburgh. Or if you like this song.

In book news, I just finished Red Moon Rising, the story of Sputnik and how it influenced America's first satellite and Dwight Eisenhower's last years as President. It's similar in tone to last year's read, Space Race, with the usual suspects, Korolev, Kruschev, Von Braun.

We also finished Viking ships at Sunrise, where Jack and Annie use the Magic Treehouse to visit ancient Ireland and see a monestary, and Vikings. In an odd bit of synchronicity, porsche-boy has been bringing a treehouse book to read in the morning.

I  also just finished KSR's The Martians, a thick book chock full of stories, poems and essays to dry, boring or not plot driven enough for his thick Mars trilogy. Recommended if you like reading about climbing cliffs on Mars, or constitutions.

I've been trying to get a copy of Black Snake Moan. The local library branch has it, it should be back in today. I may also get the Buffy with Once More With Feeling, and eleven year old wants to read a Warrior Cats book. Will I get it?