DRAMA! Puppers! Weekend. Work. Meet some of the kids upstairs.


AFKS's sister-in-law can't hold a job, and is broke, and is likely getting tossed from her house this month.

AFKS's dad is losing his mind. Currently in his early months of his third or forth divorce (I don't know, I lost track in his case), he won't leave his ex alone. No, I mean, calls her five times every ten minutes won't leave her alone. She's now regretting telling him she doesn't mind keeping in touch and is considering a restraining order. Unfortunately, he's so addled she's not sure it'd do any good.

Dad's marriage appears to be in yet another free-fall as his current wife can't have any negativity present at all. I mean, he so much as says he doesn't care for a meal that her daughter likes and it's "you don't love me. You've never loved me. You hate me. I can't be with you!"

My extended family on Dad's side is currently going through a holy war over who's going to host Easter because the guy that used to host Easter every year has his own house again for the first time in a decade, but the person who took over hosting Easter after he moved onto his ocean-going sailboat doesn't want to give up that par-tay.

Gramps on mom's side is due for an experimental brain surgery sometime in the coming year and it's got him down. This is the only one that has any affect on me personally because, god damn it all anyway he's the only relative I've got on that side that's older than me that isn't a raging asshole. Grandma could barely hold it together at the best of times, and Gramps is her crutch. With him fallen on hard times, she's a basket case. All of her drama aside, it's tough to deal with what could go down with Gramps. It's sort of a make or break deal. This surgery will either alleviate a lot of his Parkinson's symptoms, or he just won't ever wake up from it. And that sucks a lot. A whole lot. What sucks worse is Grandma trying to turn it into a "what about me?" thing. He needs strength and patience right now, not some raging lunatic screaming in his ear about how important she should be to him in his own time of need.

I will be there when he needs me, whether he asks me to or not. Because he was there for me more times than I deserved. And I'll hold her back and tell her to behave herself, because I'm the only person in the family who isn't afraid of her and her crazy tirades. Others tell her to settle and she flies off the handle and they back down. I tell her to settle and she mumbles and sits down because she knows when it comes to bringing the crazy, going up against me is NOT a good idea.

As I said, I'll be there for him. I'll comfort her if that's what's needed, and restrain her when that's necessary.

Mom claims she just can't get enough time to go down there for her dad's surgery. She works out of the home keeping her husband's paperwork for his insurance business. He did that by himself for years before they were together. He could manage.

The selfish doesn't fall far from the tree. I need to have a little chat with her before plans become set in stone on this surgery schedule.

Grandpa came and lived with Mom for almost six months after her divorce from Dad. I think she can manage the week to two weeks necessary to help him through his early surgery recovery. Or at least be there if the worst happens.

Outside of that, things aren't bad. That's a big one, but he'll either improve or be done with it soon. And that's better than this constant downhill slide he's been on over the past few years.

Fuck Parkinson's. You, and your pal Cancer who took my other Grandpa, fuck off.

Mrs. NFB's brother has a new pup as of about a month ago or so. They'll be bringing him over to meet our pups this weekend. They say he gets along famously with other dogs. He loves other pups and likes to play and run with them. Our dogs like to run a lot too, and are fairly social in the right setting. Their own back yard is usually a pretty good setting. So, Saturday afternoon will be interesting to see. The last pup to come visit them was old and decrepit and couldn't keep up with them. This guy's younger than them by several years and still mostly puppy. Here's to looking forward to worn out dogs Saturday night!

This weekend Mrs. NFB wants to get out of the house for a while. More than our standard hit at the Mongolian place and then grocery shopping. I suggested a movie but she seemed real unhappy with that. So, I'm not sure what we're gonna be doing, but we're gonna be doing something. 'Cause, "I just need to get the hell out of this house!"

The boys we opened up the web filter for yesterday so they could get their scores and update their brackets all day long? We caught them in the crapateria with one of the TVs locked on to the sports channels three times yesterday. Once at around 11:30, once around 1:30, and again around 3:30. But, they're not going to spend too much time worrying about that March Madness thing. Just a couple checks a day.

Can't wait to check the web logs on Monday. I'm betting it's a permanent stream from the moment the filter opens until the moment it shuts down, except for the times they're in the crapateria checking the TV.

Faces obscured to protect the self-proclaimed short-bus riders. Remember folks, they did this on purpose. There were many more pictures, but I felt this one capture the true spirit of "kids upstairs" about the best of any of them. 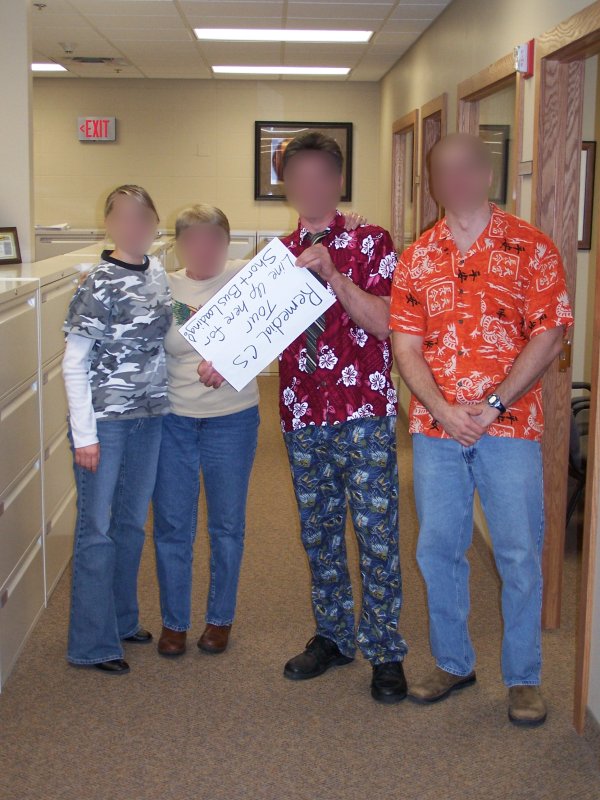 If only there were a way to retain the smug smiles they had on without showing their faces.