What I'm Watching
Saw cult Korean revenge movie Oldboy. Good movie: loved the brutal fight scene in the corridor. Might be a bit tough to watch for the squeamish: it's not cartoonishly over-the-top like Kill Bill, but near-realistically horrible.

Wish I'd seen it in the cinema though: it's a bit melodramatic and found it a bit hard to suspend disbelief. Could benefit from the lack of distraction and unpausibility of the cinema, though it's low-budget with no impressive effects.

Well worth seeing if you have a certain tolerance for blood and silliness.

What I'm Reading
Throne of Jade is the second Temeraire book. Series concept: Napoleonic wars with dragons. This one has Laurence and his dragon shipped off to China, in this universe a more formidable nation due to its superior dragonpower.

Still pretty entertaining, but not as good as the last one. Most of the book is spent on a long voyage. The Aubrey/Maturin series is clearly a big influence, and a lot of it seems very familiar from there.

I did like the dragon society aspects. In Great Britain dragons are treated as animals, despite their ability to talk and seemingly superior intelligence: in Imperial China they are treated as similar to people. Hopefully will see more of that in future books.

Again, a little disappointed by the dragon warfare tactics. The dragon carrier ship is apparently large: you'd think it would be escorted by smaller vessels, or at least have a tender.

Operation Don't Get Fatter
Went 18 weeks without weighing myself, and as expected have gained a few pounds. Will be trying to shed a few: probably just aim to lose 4 pounds or so.

Current method: I haven't had any alcohol for a week and have cut down on evening meals: might switch methods if that doesn't work.

I've noticed from the graph I seem to gain weight at a pretty steady rate if I don't weigh myself. Could try adjusting things, but I'm already doing all the easy stuff. Also I have a hunch that this weight gain doesn't come from everyday stuff but occasional blow-outs. 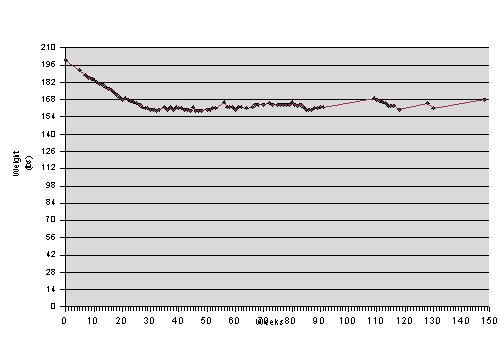