My cats are finally back home. Both of them. Boy was finally released today and Stelpa's been improving drastically. First thing they did was go to each other. 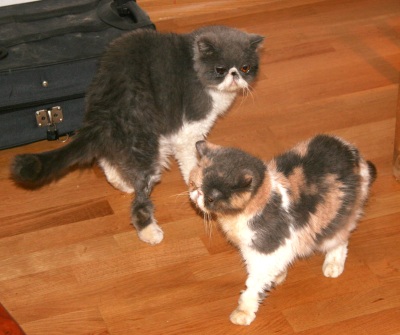 She's not happy about the two needle sticks yesterday. Every two days she gets 15-30cc of electrolyte solution followed by 0.25cc Erythropoeitin. Yesterday was only 15cc of the electrolyte, in part because she's been drinking well and not excessively, and in part to ease the trauma. I'm good with a hypodermic but punching through skin is always a crapshoot: sometimes you're going to hit a nerve, sometimes you won't. Luckily she never noticed the EPO shot which is good because it's a lot fucking harder to dose such a small amount.

For those medical people reading, I've got 22ga needles. I told 'em not to bother with the fucking 16s. Yes, even for the electrolyte. I have to push that shit slowly anyway. If you've ever had a sub-q shot you damned well know the last thing you want is speed. A 22ga needle only makes it that much easier to restrict the flow.

He needs work, too, but at least no needle sticks. Antibiotics for the next 10 days, 2 tablets BID. Then there's the right eye. Sweling's way down. Some infection as well as the glaucoma or tumor. Eye drops BID, eye ointment PID/HID! He's still showing little interest in food so tomorrow he may get some ground-up convalescence food via a large 30cc syringe sans needle.

Boy's taking his meds well but Stelpa, well, I can't fault her. I'm jabbing her. It sucks. I made a mistake and did it yesterday on a main thruway in the apartment. As of tomorrow it takes place in the off-limits room, as will his forced feedings (if necessary). Despite us both taking part in yesterdays needlework, Stelpa hasn't avoided us, just this particular spot in the flat, right in front of the bookshelves. I'm going to have to make this part of the flat (where she also prefers to sleep) a lot nicer. Not quite sure how to do that, but I'll come up with something.

The pair of 'em are grooming nightmares. She's actually worse; one doc listened to me and sometime in the past three days shaved off the worst clumps of felt on Boy. He looks a bit funny with bare patches on all legs and half his belly shaved. Stelpa, OTOH, has massive, tight knots and clumps all over, including both sides where I need to stick the needles. She spent 45 quiet minutes tonight on my lap as I slowly broke apart a couple of the largest ones. This is going to take a while. What's interesting is that even though it can be briefly painful at times, she realises she feels a lot better afterwards. The constant pull on her skin from the knots is relieved. Her brother's not that clever. Pull too much and he bolts.

Right now I'm just happy I have 'em back, if only for a little while. I'll deal with the clinic's barbaric ideas about further eye treatment next week. While an ultrasound can determine if a tumor's involved it can't determine benign vs. malignant/metastatic. Their tumor solution: remove the eye just in case the tumor's not benign.

ATTENTION GERMAN VETERINARIAN INFIDELS: If you can do a fucking feline trabulectomy you can damned well insert a fucking probe through the incision at the time of surgery in order to pull enough cells for testing. Dumbasses. You've been wrong about all treatment every step of the way for the past two weeks, and, no surprise, I've been right. Do what I say. I'm paying the bills and the cats are happy.