Last weekend, I noticed that he's lost weight. He vomited after eating, and refused to eat his regular food.


Our vet, who is wonderful, diagnosed him as having liver failure. His ears were turning yellow, and his gums were also jaundiced. They gave him iv fluids and kept him overnight. Today, he got an ultrasound, and the diagnosis of feline hepatic lipidosis.


Dr. Low explained that this is probably the best outcome because it is treatable. It's caused when a cat, especially a large cat, goes off his food, and the body starts processing the fat, which affects liver function, which in turn makes the cat vomit and not want to eat, which makes the liver worse. Usually, Dr. Low says, people are able to pinpoint why the cat stopped eating (stress, generally, or change in diet). He hasn't had any recent stress that I know of, and his diet changed months ago, but he's seemed happy with it.


The treatment is kind of horrible - he'll have to get a feeding tube and get force-fed through the tube for as long as a month. Getting all of the calories he needs is the only treatment, and even with the feeding tube, there's still a 30% mortality rate.


I'm both relieved, and scared, and sad. At least we know why he's sick, and at least it's treatable and he has a good chance of survival. I wish I'd noticed he'd been off his food for a while, though - Dr. Low says this doesn't happen overnight. And I didn't notice anything wrong. This is the cat who's been with me since he was four weeks old - the cat who hissed at me when he was 8 days old - but I didn't notice that he wasn't eating until Saturday. I miss him. I hope he gets to come home soon. 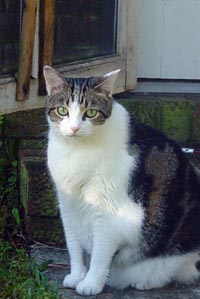