What I'm Reading
Finished the fantasy novel Fool's Errand by Robin Hobb, which was given to me a while ago. More light reading: I seem to have run out of motivation for anything even remotely heavy. Maybe the new Harry Potter will cure me for a while.

Pretty decent fantasy novel, first in a trilogy. The universe has human-animal telepathy which is fairly common, and human-human telepathy that is rare: there is prejudice against the first group, who are witch-hunted if they reveal themselves.

Again, worth a look if you want some light reading. Plot goes a bit beyond the usual pick-up-the-magic-tokens, though it's stretched out quite a lot by comparison with Jim Butcher or George R.R. Martin. Characters fairly interesting. World fairly fantasy-standard.

Listening
Planned to try a few tasters of various things before continuing. Started TTC lecture "Great Ideas of Psychology" but not sure I'll continue: think I know enough about the basics that it would be mostly repetition.

What I'm Watching
Saw the latest Die Hard movie (Called "Die Hard 4.0" in UKia) at the cinema. Not unwatchably terrible, but fairly disappointing. Good points: there's one good stunt scene where they drive a car up a ramp into a helicopter, and manages to stay fairly pacey. It's a bit too long at 2 hours 10 minutes, though these days that probably counts as short. Most of the action scenes are fairly routine and familiar, and a couple of good setups are squandered. the car crash in the tunnel had a great setup and apocalyptic potential, but ended up like something out of the A-team with a miraculous lack of carnage.

I don't think I'm too fussy about suspension of disbelief, but couldn't really manage it for some of this, especially the jet fighter versus truck fight.

Overall, wouldn't bother with this one unless you're stuck for something to watch.

Operation Don't Get Fatter
So, I'd been trying the novel technique of losing weight by halving my alcohol intake. Had a break from that last week due to unexpected socialization, but it doesn't appear to be working. 1 week of abstinence and 2 weeks of half-rations should theoretically have lost me 2 pounds, but nothing's shown up on the scales at all: seem to be up if anything.

Might be that I was consuming less alcohol than I thought. My usual home whisky glass is pub-standard, but I don't tend to fill it to the brim.

Worse news, after stupidly spilling bleach on some trousers while cleaning the bathroom, I tried buying a new pair from Marks and Sparks, but couldn't fit in to my normal size despite trying three pairs. That also suggests that the last six months weight gain may not entirely be increased muscle mass.

So, it's back to cutting down on food. Still want to try something new so I bought some Slim-Fast® milk shake powder and meal replacement bars. I quite like the theory: you substitute a milkshake or bar for one or two meals per day, and eat the others normally. Appeals to me in a paleo-future meal-pill kind of way.

The milkshake seems to be fairly thick and filling. The power turns out to be mostly a mix of sugar and skimmed milk power. Each 250ml shake breaks down to:

Surprised by how much sugar is there: would have expected sweeteners instead. Even so, it seems to check out in protein/calorie balance terms. If an adult male just consumed the milkshakes all day to get his 63g daily protein, he'd be consuming 1001 kcal, leaving a hefty 1500kcal deficit to play with.

GI diet fans might want give it a miss due to the sugar content, though it's slightly less than that in a can of coke.

Seems reasonably satisfying, tried them twice and didn't get hungry till about 4 hours later. However, after that I got pretty hungry for solid food. Don't think I could manage two meal substitutions in a row as recommended by the Slim-Fast® plan.

VoxEU: Why is inheritance tax decreasing at a time when people are worried about inequality? Has an interesting graph of the top 1% of people's share of wealth: 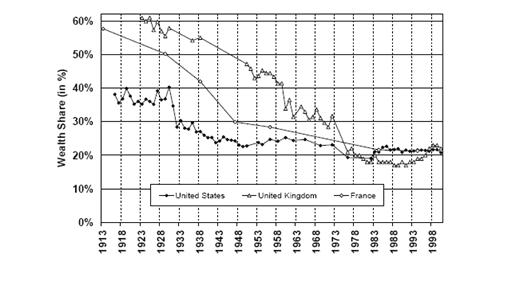 Be safe and smart on Metafilter!