Don't worry, almost no politics inside.

Now for me this is a doubly new experience. Firstly, I am a contractor for the first time - dropped into the middle of a chaotic situation, surrounded by huge amounts of new people, and expected to do amazing things to justify my obviously inflated pay. Secondly, I actually have only worked (in lots of different jobs) for one organisation before this - I know one way of doing things, and have already had to stop myself from trying to impose that view of the world onto this new role.

I'm not going to go into great detail about the role, for obvious reasons, but I am slightly perturbed by how... disorganised everything seems to be. In the projects I have worked on, I have either had the luxury of setting up all the controls I wanted myself, or lucky enough to only have to worry about just one part of it which I could organise myself. But in this case there are huge numbers of sub-projects to get sorted out, and they are all being done in a chaotic manner with all the knowledge as to progress kept in one person's head. For a project manager, that means "Eep".

One odd thing - I am busy trying to convince the internal development team that they should demand a more detailed requirements document / specification from the (also internal) client. They don't seem to see the need. It makes me feel like there has been a great disturbance in the force... The current requirements of "It should, you know, do stuff" seems to be enough for them. They'll learn. THEY'LL ALL LEARN. Or something.

The past two days I have been down in London, trying not to cross myself whenever I have to take a taxi. And I'm not even Catholic, they're just that damn scary. I feel an odd mixture of country yokel and metropolitan sophisticate - I always feel vaguely lost in London, and whenever I am down don't have time to wander around as I am with work, yet this trip the guy I was with had been in London far less often than myself. I imagine I'll get used to it, as apparently I will be expected to be in London exceedingly often - they were talking about one or two days every week. At this rate, I may even end up meeting some of you lot, unless I take the appropriate precautions.

Most of the time, however, I will be based in Manchester. The concept of commuting is a tough one for me - I once moved from 20 minutes drive away to 10 minutes drive away because I hated the wasted time so much. Now I have a commute of about an hour each way, but by train. I've only had to do it once so far, but I can already tell I'm going to find it irritating. I want the moon on a stick, I do... One thing I did find odd was that the train was so very, very quiet. I'd normally get the train on a weekend, when it would be full of chattering kids, but the commute in in the morning was practically silent - two people were talking, which just seemed to make the silence of everyone else even more obvious. That part I could probably get used to, the being crammed into an over-crowded carriage, not so much.

Of course, the best thing about this new type of work, as far as I am concerned, is being able to go home and giggle to myself every night at the though of the money I got that day for just turning up. I'm secretly an evil capitalist.

So, The Death of Socialism made it to the front page. Sorry I haven't made any replies to comments, I have been rather busy getting ready for this contract, and, of course, figured that the first week wasn't the best time to test the limits of their web-blocking. I will try to. The one major comment I would make is that it wasn't meant to be an academic critique of socialism, or Blairism, of anything. It was purely and simply my lament. The party I joined, and I believed in, has finally managed to prove to me that it doesn't exist anymore, in any meaningful way, and that does fill me with sorrow. It seems to me that the consensus of most of society that the current systems we live under are the ones we will always live under is both depressing and dangerous. But then again, maybe I'm just a throwback.

However, one thing I did notice is that I found it much easier to write that then most of the fiction I have been doing. I guess baring my soul, or at least writing about something I feel passionate about, really does make a difference. I've tried to bring some of that into my fiction, but it always turns out preachy.

Writing it also made me realise it is probably time I did actually get involved in politics seriously again. I know I have written that before (and suspect I will write it again..) but I guess I'm running out of excuses. I'm obviously not happy with where we all are at the moment, and it has become blatantly obvious no-one else is going to do anything about it (or at least not in the direction I want things moved) so maybe I should give it a try. On the whole, I don't think posting political rants to an internet discussion board/blog/collaborative media social fusion experiment/what the hell do we call this place anyway?/community is going to change the world. Of course, if you'd all like to go out and start a protest march to prove me wrong, feel free.

Here's a thing - the battery life of my laptop is much longer when I'm running Ubuntu than when I'm running XP. Obviously we should insist all laptops run Ubuntu to help reduce carbon emissions.

I can't think of anything else, but the train has only got to Rugby. I'm worried if I put the laptop away, someone will try and get to the other seat on this table... Oh, right, I have my notebook I jotted some stuff down on when I was in Oxford. And I can even play with the photos if I boot up Windows.

Wandering round Oxford was quite odd for me. While it is very different from where I went to university, they are both towns practically defined by their university, and I found myself slipping back into the habits of a student - happily I managed to resist the temptation to buy a packet of Marlboro Lights, but it was a close run thing, I can tell you. The most dispiriting thing, though, was being able to see that the students of Oxford today were still in the same groups, tribes, what-have-you as they were in my day, in a different university. I imagine someone, somewhere has done a study on how these social memes are transmitted in such transient groups, but I can't be arsed to find it. Of course, the other option is just that none of us are that special, and the different generations repeat ourselves spontaneously, but I'm practically positive all of us remember precisely how original we all knew we were at eighteen. *cough*

I popped into the Ashmolean, but it was kind of disappointing, and I'm not precisely sure why. A massive part of it was that a considerable section was closed for refurbishment, but there was more than that. Some of the Egyptian stuff was set out well, and tried to give an idea of the timelines, but on the whole you could tell the collection started as someone's gathering of curiosities, and had to an extent been continued as such. Of course, the other possibility is that I am a cultural pygmy, which is certainly a concept I am willing to entertain. 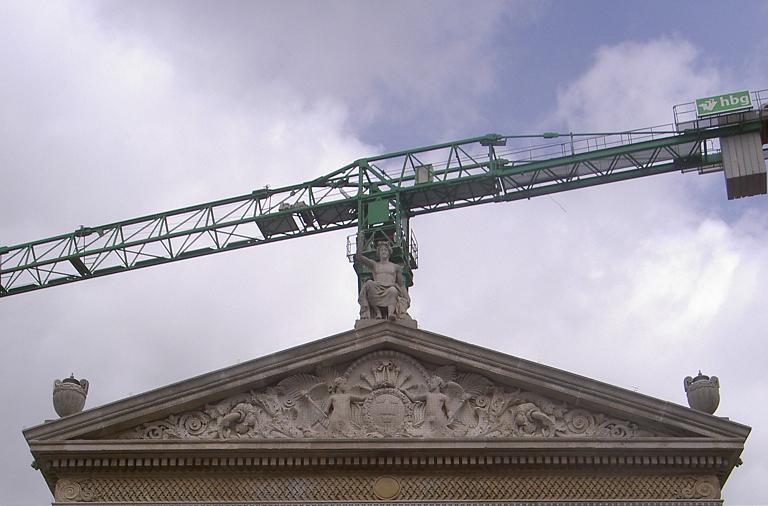 I also found one of the exhibits profoundly depressing. They have a Stradivarius there, a beautiful object to be sure, but to me locking it away in a glass case is missing the point. These instruments are not venerated because of the way they look, but of the way they sound. While it is of course impossibly to hire a concert violinist to play it all day every day, I can't help but think a better use for such an artefact is to give it, or sell it, if you must, to someone with the skill to play it well - an instrument that is never played is a travesty.

Hrm, having done a bit of research, either it isn't played due to conservation (in which case a big boo to the Ashmolean) or because of the conditions of the bequest (in which case the person who wrote the will is evil).

Finally, I noticed what to me seemed striking accents in Oxford. I find it one of the joys of living on this island of ours, the stark differences in accent you get over such minuscule distances. And within Oxford itself, some accents made me think the speaker should be leaning on a farm gate with a bit of straw in his mouth, while others made me instinctively reach for a gun, being the class warrior I am.

Right, that's it. We haven't got to Crewe yet, but I'm going to risk putting the laptop away... Bye...