A Day in the Life

I can't sit in the Cube at the Desk of Hate all day long. When it's time for this monkey to have a smoke, I usually take a sudoku puzzle with me. I do 'em in the train to and from work as well. I've done so many that I can do most puzzles at the hardest level in under 10 minutes. Luckily, Berti hates smoke and so avoids the smoking room which means I'm not subject to his opinions on how the puzzles work.

Warning: This diary contains nothing about fuckwits, only a method for solving difficult standard sudoku puzzles.


I don't use strategies such as "Advanced cross-hatching", "X-wing", "Swordfish" and the like; to me they're obvious and nothing more than long names and descriptions for what I already do: scan numbers in rows and columns and when those are all set, start looking for pairs and triplets. However, there's a rule I came up with a year ago which I call "Uniqueness". No other site ever explained this, and when I sent it to the guy with the former Numbah Wun sudoku strategy site, he gave me nothing but a "Pish and tosh". Fine. Fuck 'im. He's wrong, I'm right, you benefit. 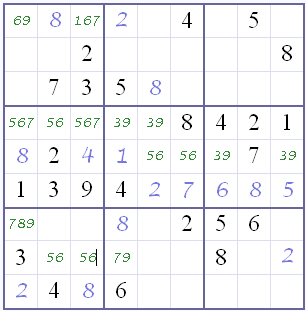 First we get some preliminary numbers out of the way: 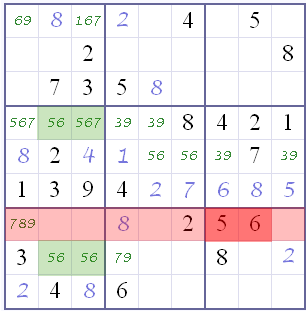 In looking for pairs we have two blocks with 5 and 6. If all four of those boxes are either 5 or 6 then this is an illegal puzzle. It would have two answers. 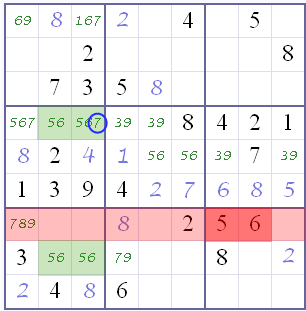 One square also has an additional alternative Since Uniqueness demands that it cannot be either 5 or 6, this alternative must be the answer. 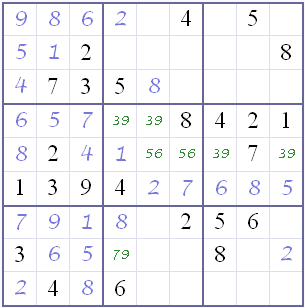 After that one certainty, we can fill in a lot of numbers, starting with the 1 in the bottom left quadrant since 5 and 6 are still blocked in that row, forcing the top to be a 6, forcing the number below the newly-placed 1 to be a 6, and so on. From 45 open spaces we're down to 29. 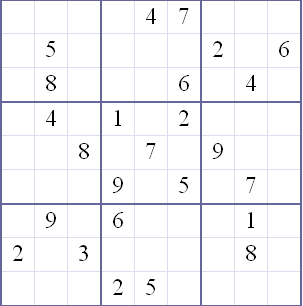 After some quick scanning to fill in the obvious, we've got this: 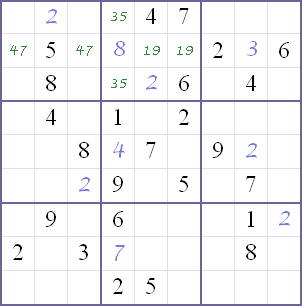 Pretty simple, but now what?

I noticed the 1 and 9 in the bottom middle block, and this is significant because there's a 1/9 pair in the top middle block:

Now that still leaves three empty spaces for which I only know two numbers but then Uniqueness comes into play. In the example, blocks A and B both include the same 1/9 pair while block D has the 1/9 and a third number. :

There's only one of three possible ways to fill two of the circles with 1/9 which gives a legal result. Circles B and C can't be 1/9 since there's already a box in that column which can only be a 1/9. Circles A and C can't be 1/9: this would violate the Uniqueness property allowing two different ways to solve for 1 and 9. That leaves A and C:

Since the 3 and 8 in the second row from the bottom can only be placed on the top of this bottom middle box, position B must be a 4.

This is the first time that I've come across Uniqueness being a factor early on. It normally appears fairly late in a puzzle with a pair somewhere and the same pair mirrored elsewhere but with a third possibility for one of them. The Uniqueness strategy always works (by definition it must), and is often the last recourse before guessing.

While extremely rare, Uniqueness can also be used if nine spaces house the same pairs/triplets over three rows or columns, along with one extra possible digit in one of those spaces. If I see it again I'll add it here.

These days I'm doing "Killer", "Greater-Than", and "Greater-Than Killer" sudokus. These fuckers aren't kidding when they call their weekly puzzles "mind-bending". I'm grateful to Websudoku (as well as to Sudoku.org.uk) for all the puzzles they've provided me but these days I'm getting more challenging stuff from Killer Sudoku Online. If anyone has any links to sites which offer regular supplies of other sudoku variants (pips and shared cell, for example) please let me know in the comments.

Note: These graphics gave me a chance to try out Paint.NET for the down-and-dirty crap I normally do in PaintShop Pro 3. While it's still young, it's pretty damned good. An imitation Photoshop to be sure, the features it lacks are made up for by the ease of use. They need to make layers copyable and savable; I had to draw the red shading for each graphic individually. The learning curve's very shallow if you know Photoshop and still not terribly steep if you don't.