I posted this diary an hour ago

Inside, what I expect to be a lengthy diary about stuff and things, and a little bit of whatnot.


Rather than use my normal categorization, I might try to write this diary in sequential order instead.

First, let's talk about getting paid. A few weeks ago, I got my bonus, which although pro-rated since I went full-time in May, was still pretty good. It was about 12% of my salary for the time I worked here last year. As a result, the credit card that I had loaded up with all sorts of things for the house was paid, and a new Samsung HD plasma TV was purchased. It looks really nice, and now I can actually watch TV without wearing glasses.

After that, a friend who took a really long honeymoon came back to work. For reasons I won't go into, his wife couldn't enter the U.S. for a few more months, so he was left with the option to quit his job and return to the country his wife was stuck in, or try to work out a deal with his boss to work from home every other week. His boss didn't accept that deal, so he quit. It was a bit depressing but life goes on. There are very few people I like to hang out with at work now, and I could tell when he was at his going away happy hour that he was pretty depressed about it. All the people I like to hang out with end up quitting.

We went out for drinks with another friend, whose provocatively-dressed Nigerian girlfriend ended up being a huge distraction for a recently dumped friend of mine. Crawfish is sort of in season here, so a lot of people ate those. I'm ok eating it, but I don't want to have to tear the little things apart on my own. I want my food prepared before I eat it.

On Friday, we picked up my sister-in-law and her husband at the airport. Since my brother-in-law is from Mexico City, we decided to try a Mexican restaurant we had never been to. It was good, and the food was authentic from Mexico City. I still want to find a good northern Mexican restaurant because there are no good tacos or burritos in Houston, but this helps us at least with tortas.

On Saturday, we got up and went to do the 3D ultrasound thing. We were very happy, although it seems that the results were not that good by the standards of most people. Neither my wife nor I care, we were happy to see the baby even if she did try to hide herself behind her arms. Here's a sample picture from the hundreds we got: 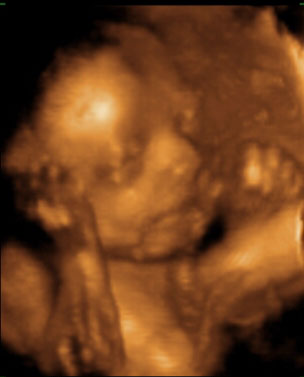 There's a whole 30 minute DVD too, but I know what it's like to be around someone who has a kid or has one on the way and can't shut up about it. I feel bad for posting even this much.

After the ultrasound, we went to eat Thai food, then went home and played the Wii. My brother-in-law and I got in a few really good boxing matches. All in all, I am the better of the two boxers, but not by much. I can easily destroy my wife and her sister though.

On Sunday we got up and went for dim sum and met up with a friend of mine, who is a chicken feet aficionado. I stuck with the more normal stuff like seafood. After that, we went to Brazos Bend because my sister-in-law and her husband had never seen live alligators before, and it's always a fun and cheap little trip. After that, we went back to the Mexican restaurant and then home to chill out for a while.

Last night there were tornadoes in our county, but they were weak and didn't hit too close to us. I think the footage I saw was like a stop sign got blown over or something equal to that. Having lived in Oklahoma City, it was just another day for me. The lightning did wake me up though, as I turned the blinds in the bedroom the wrong way. That will be resolved tonight so we get to sleep better.

Tonight I am looking forward to the next episode of 24. Now that I have HD, I want to see how great everything looks. The last episode kind of sucked, so I hope today's is better.

Also, you'll notice that other than the bonus, I haven't really talked about work. It is stressful, not because of the work, but because of the office politics. I don't even want to go into detail because it is at least a diary's worth and I feel it's not worth it.

I wrote the poll question because I have been busy and haven't had much of a chance to write a diary for quite a while. Additionally, I don't really keep in much contact with anyone here right now. I enjoy being a part of HuSi, but don't have a lot of time to write here lately. So, my poll is meant to be a question of if I should continue responding to comments and writing the occasional diary, or if it doesn't matter. Just let me know if you feel like reading my future content or not.