Internet connectivity was down for the beginning of last week, so I failed to post any trades. I did post a brief summary of my basic opinions as a comment to the previous entry.

Positions in the "to win the Premier League" market from last time, along with current prices (buy prices rounded up, sell prices rounded down; prices quoted from Betfair on the 0-100 scale at $10 per contract)


The valuation model now says that Home Counties Buccaneers should be more valuable than L'Arse, albeit slightly, with both being the mid-30s or thereabouts. Liverpool's decline (as has seemed to always be the case under Benitez, the club of martyrdom seem to be all too willing to settle for a draw) is basically the only silver lining from the past couple of weeks.

So here's the latest projected table... the valuation algorithm to some extent believes that a bird in the hand is worth two in the bush, so the valuations don't perfectly correlate with the expected point totals.

Arsenal and United supporters can put any insomniac worries about relegation aside. I expect that sales of Ambien will be down significantly in the South East.

Even with a new manager, Spurs still can't get a bounce and beat a club they need to beat in order to climb the table. As I see it, the weakness at Spurs is defence, and yet the board spent the summer masturbating at the prospect of paying Thierry Henry money for Darren Bent (admittedly, Henry's goal return is only twice that of Bent thus far this season; another smart move by Wenger), when they've already got too many strikers. I'm sure Villa would be willing to deal Zat Knight for Jermaine Defoe; he fits what seems to be O'Neill's player ideal: young, fast, and British.

SELL 13 MAN UTD at 42.3. Strangely, the price hasn't moved much, even after getting an away point against the other horse in the two-horse race.

BUY 7 ARSENAL at 26.0. You were expecting? Since I don't really have anything better to put here: 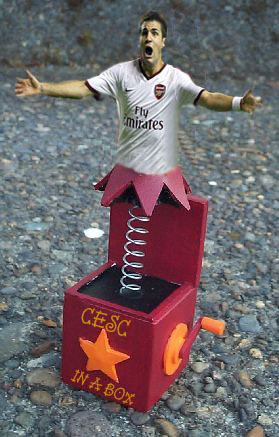 SELL 26 CHELSEA at 21.7. Their valuation has gone up dramatically over the past few weeks, but I think winning the league is a bridge too far. It's still an open question whether they'll still have Drogba on February 1.

SELL 56 LIVERPOOL at 7.6. So I see that Rafa thinks that his job is safe. Who knows, he may well be able to pull the wool over Hicks's and Gillett's eyes, given what they know about football.

BUY 10 MAN CITY at 0.8. They at least took care of business against the Mackems, and still are significantly undervalued.

BUY 19 BLACKBURN at 0.3. While dropping points is not the way to the title, I think they're capable of a run that will see a profitable exit point emerge.

BUY 26 PORTSMOUTH at 0.2. Like it or not, Pompey could well be another Blackburn: a smaller club that manages to hang with the clubs a class above them (the big 4, Spurs, Everton, Newcastle, Villa, and [pending a recovery from Ridsdale, Bates, etc.] Leeds) for a sustained period. The one real worry this season is the players they could lose to African competitions.

If $TEAM wins the league: