On dignity and humility

By R343L (Tue Sep 19, 2006 at 10:31:59 PM EST) dignity, humility, religion, God, philosophy, ethics (all tags)
Why are certain members of my government and intellectual classes so intent upon violations of human dignity? Haven't they heard of humility?

Why is torture acceptable as a legitimized practice? Why are lack of trials, power to confront one's accusers, etc. so problematic even for TEH TERRORISTS? Whatever some crazy religious/political extremists might do (including killing millions of people), they are STILL HUMAN BEINGS. Deserving of dignity, rights, understanding, compassion and so forth. All people come from somewhere and there are reasons for everything. The descriptive label of "terrorist" or "evil" should not be sufficient to treat a human being as less than such. There is NO judgement that should lead to that result.

Which leads me to the personal humility part of this rant. But first some background.

When I was quite young, I didn't really (actively) believe in God, go to church, etc. My dad didn't really push religion or any specific belief. He sometimes went to a church himself, but never made my sister and I go. But for a while (5th grade up to about college), I voluntarily went to church every Sunday. I started going because my best friend's family did. I stayed because I found something I liked that involved community, compassion and beliefs like "judge not lest ye be judged" and "brother love" and so forth. I sang in the choir. I went thru confirmation (presbyterian if anyone cares). Eventually I decided that rationally I couldn't prove (or disprove) the notion of a deity and gave it up (officially: agnostic). But it left me with a lot of the same ideals (which were hard to shake even thru the objectivist phase...)

One belief it left me with was the fallibility of man. God is infallible, man is fallible. Fallibility means that properly we should have humility. To be humble in our actions, beliefs and words. Because there is always the possibility (even the likelihood) that we are wrong. We are not God.

Of course I don't "believe" in God anymore, not like that. But I still believe in an ideal of it or rather the negative of it: that human beings aren't God. They aren't perfect, all-knowing, etc.

Okay, done with the background.

What does this have to do with the topic I started with? There are a lot of absolute judgements being made of many individuals (and indeed entire groups of people). The problem is that we can be wrong, both about individuals (is this fellow really a terrorist? is he really planning to kill some of us?) and about entire societies. I am saddened to see no signs of humility in our leaders. They do not seem to believe they can be wrong in their judgements. I could be wrong and missing some important piece of information. I hope that I am.

Actually, let me go back to the first part: human dignity. When I was religious (warning: more religous wackery), I firmly believed that God so loved His creation that He sent His only son to die (rather gruesomely) in order to save all those fallible, imperfect humans. God (and Jesus -- I never really got a good handle on the Trinity) believed that every human being was worth saving. The whores, the liars, the child abusers, the murderers, the saints, the everyday family man, the insane. Everyone. God loved His creation of man so much that He couldn't condemn any of them to be separated from Him forever.

What does this mean for the religious former-me? Even if we are correct in our assessments of certain individuals who are being held incommunicado and probably tortured, God loves them anyway. God says they are worthy of forgiveness, love and understanding. Jesus Christ died to save them the same as anyone else. They are human. Humans beings deserve respect and understanding. Dignity. Even if they are terrorists.

Now, of course, I'm not all that religious anymore. I don't really believe in a giant sky diety with a beard and robe (just to be flippant). But those ideals and ethics rubbed off on me. And it upsets me that people who ostensibly believe in these same things don't seem to be trying to live up to them. Some seem to believe it's okay to not treat people with dignity and appear to believe they cannot possibly be wrong. Actually, it just boggles the mind. I just don't get it.

Politically and socially, all this god/religous talk means that the terrorists should be treated just like everyone else. Thieves get trials; so should terrorists. Rapists get to confront their accusers; so should terrorists. Murderers have the right to assistance in their defense; so should terrorists. A terrorist is just one kind of murderer after all. Trials and organized rules are (to me) just a way that fallible humans can organize a society (or a world) to be as just as possible in an imperfect world, hopefully mitigating the possibility of failure. The religious-me would say that is how we keep from usurping the position of God. We have to have rules, but we shouldn't let the necessity for rules result in doctrines of human infallibility of judgement and punishment.

And it doesn't matter to me if our "enemies" are willing to break these rules. To be human is to be imperfect, but we should always strive towards more understanding, more dignity, all the while being humble in our assessment of our abilities.

Note: Yes, I used "he" and male referents. That's what I grew up with. I apologize for assigning such an insignificant human characteristic to God. Of course, this comment is just here to be flippant. And yes, there is a contradiction in the message and my own judgemental attitude. Oh well.

And on a lighter tone, puppy!! 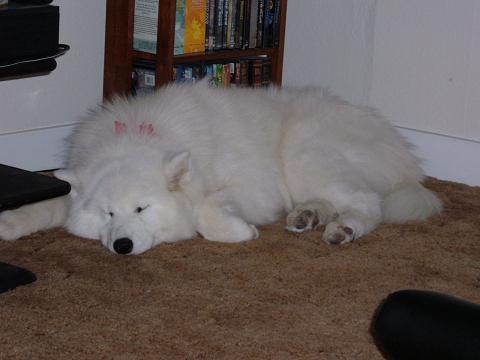