But, our 15 year old seven toed male cat was one heck of a cat, maybe because he was so doglike, I sure did like him.

We got Merlin fifteen years, two moves, two children, two cats and one dog ago. The first night he showed what a pain in the ass he could be, burrowing out from under the bathroom door to sneak out and pee on Mrs. Ha. The he started attacking grey cat, one year old, continously until she started putting up with his advances, and even allowing some spooning. 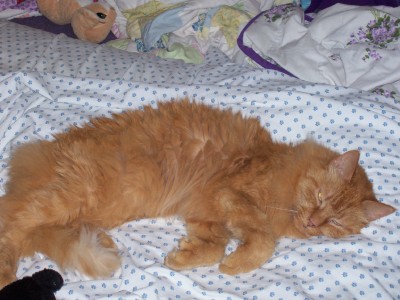 He was doglike, a favorite game was to play fetch with a small ball of aluminum foil. I never knew a cat that would play fetch. With his extra toes on his front paws, he looked like he wore catchers mitts, and he had quite a grip. He was big and athletic, visitors were always astounded to see him leap to the top of the six foot high TV cabinet in one bound. only a few days ago he would go out on our upstairs back porch and jump down to the ground floor, if we were too slow in going downstairs.

Eight year ago we got our dog. We put a gate on our open cellar stairs, so the cats had an escape. Greycat never recovered from this trauma, but Merlin slowly made an accomodation with the dog, and they had a grudging respect for each other, though most of the time the dog though of him as his own, elusive sex toy.

Seven year ago we moved, and not long after this, Merlin got out. It's hard to prevent a cat from getting out with a dog going in and out and pushing holes in the screen door. Of course, he loved being outside, and would come in and out ten times a day, banging on the screen door if outside, or meowing loudly if inside. He would often greet us on the front porch when we came home.

He became a neighborhood fixture, walking up and down the block with you when you walked the dog, going across the street if you were over there, he was a little king of the closest houses.

In March, greycat died, and the calico we got in the fall wasn't as good as company for him. She was too young and wild and not as nurturing as greycat. 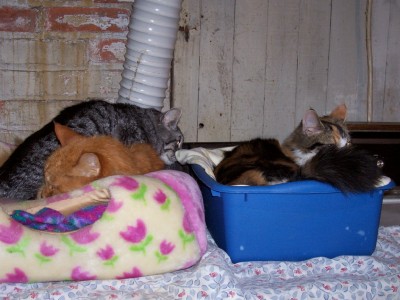 This summer we were getting concerned about his street crossing habits, especially after we lost our calico one night. He would take his own sweet time crossing the street, sometime laying down in the middle. Maybe his cataracts were blinding him, maybe he couldn't hear as well, he certainly seemed unconcerned about traffic.

Friday night, about 10, I heard him cry a few times, it was his painful choking up a hairball cry. I went to the front door, and called him, but he didn't come. I figured the hairball was out, and he was fine.

About 10:30, someone rang our doorbell. That late at night, the best I can hope for is someone trying to find the right house for a party. It was a guy, asking if we could bring out a plastic container of water, there was a cat in the road that had been hit. I asked if it was orange, it was. I told Mrs. Ha "Mer's been hit."

It was Merlin, lying in the driveway, in serious pain with blood coming out his nose. One leg was broken, and his breathing was labored. I went to get a piece of cardboard to bring him home, and when I came back, our neighbor who worked at Mer's old vet's office came by. She said with his age, even if we took him to the 24 hour vet hospital, about all they could do was euthanize him, he wouldn't survive surgery.

We brought him home and laid him on the soft grass. While Mrs. Ha comforted him, I called the 24 hour hospital. For $100, and a short wait, they would euthanize him. I was torn, I know that if I were given a choice between dying at home with loved ones, or in a sterile office, or even in a box in Toyota, I'd pick home.

One last time he tried to crawl away under the porch, but we brought him back, he was fighting until the end. Soon, he started kneading Mrs. Ha with his claws, and let out one final roar. About 11, his eyes stopped responding to light. His old heart kept on going until 11:30. This was my first time watching someone die.

The dog came out and sniffed him, and wandered away. We brought him inside, the new cat came near him, but wouldn't get any closer than a foot away.

We told the girls the next morning, and later I dug a hole, next to greycat. We buried him with catnip, and a small foil ball. Five year old helped me shovel dirt on him.