What if they gave an election and nobody came?

By aphrael (Thu Jun 08, 2006 at 02:35:59 PM EST) elections, politics, boredom, tuxes, weddings, marriage, fraud (all tags)
I had a hard time figuring out how to vote in this election; harder than most. It's not that there were no choices to be made -- the Democracy represented by Phil Angelides is somewhat enormously different than the Democracy represented by Steve Westly, for example -- but I could never summon the energy to care enough to investigate those differences, or opine about them. Some of it is that I spent the last two weeks of May working hard, being a bridesmaid, and fighting off the evils of strep throat; but the interest had been small before those weeks, and never revived with my health. Nor was it just me; turnout in this election was the lowest since 1920.

First the picture. The weekend before Memorial day weekend, I had the pleasurable job of being a bridesmaid. The full set of pictures aren't in yet, but here is one, of the bride with me standing behind her: 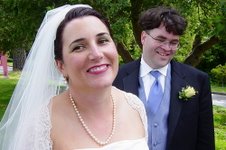 Given the existence of clear alternative visions for the Democratic party, and what the program for the next governorship should be, and given the fact that there were clear differences for most of the downticket races, whence comes this indifference? It's not as though there are no decisions to be made --- so why do I, and so many other people, not care enough to be bothered to make them?

The standard official lines on this have been one of two arguments:

There's something to both of these. Election fatigue was well documented in the former East Germany, which held election after election (culminating in the first reunified German elections) over the period of 1989-1990; enormous turnout was recorded in the first election and moderately pathetic turnout in the last. Yet, aside from pundits, I haven't heard anyone express election fatigue; it's not that elections have gotten old, it's that this election seems pointless. And it is certainly true that the election was one of the most negative in history --- even the debates were unbelievably negative. Yet negative campaigning has never before caused this dearth of interest, and negative campaigns are the staple food of the modern political consumer.

I think something else is afoot; I blame turnout on these three things:

One of the primary driving forces in California local politics is the ballot initiative. In any given election, we are likely to have between five and twenty initiatives. Many of them are uncontroversial (hey!! lets borrow $400 million to buy parklands!); some of them are highly controversial (hey! let's prohibit gay people from teaching!). The advertising campaigns for and against the controversial ones recieve lots of funding, and they have a high profile; and more importantly, they have legions of dedicated, passionate supporters and opponents for whom this one issue is the most important thing in the political world, who keep the press and the public focused on them, and who drive their friends and family to distraction urging them to agree.

This election had fewer initiatives than normal (because of the way initiative qualifications work, most of the ones which would have appeared on this ballot in the normal order of things appeared on last fall's special election ballot instead); and neither of them attracted much passion. Borrow a small amount of money (relatively speaking to build new libraries? Good or bad, right or wrong, that doesn't attract a highly passionate response from anyone except unemployed librarians. Tax the rich to pay for a preschool program which will increase by 7% the number of students in preschool? Aside from the people who are going to be taxed, and the anti-tax crowd, nobody really cares ... and even the anti-tax crowd is hard pressed to put together more than a pro forma opposition.

But surely people want to come out and vote in the gubernatorial primary, right? Unfortunately, the answer is not really, in a way that is emblematic of a serious problem with modern California politics: people's interest in and commitment to political parties has declined while the relative importance of the parties has not. The blanket primary was an important attempt at a solution to this problem, but the parties didn't like it, and they got the Supreme Court to rule that it couldn't be imposed on them without their consent.

The problem is this: more than a third of California voters have opted out of the party process altogether, registering as nonpartisan voters, while a significant number of those still registered with a party don't care much about the party per se, and aren't interested in its internal battles; while at the same time, redistricting has resulted in a situation where most legislative races are only winnable by the candidate of a particular party, and none other. Thus, in legislative races, the party primary has become more important precisely when people have become less interested. Proposition 77 on last year's ballot was an attempt to fix this problem, but it failed.

Still, that shouldn't matter for executive races to the same degree (although it certainly means that people are less interested in the primary in general). Which brings us to the lasting effects of the recall election: people no longer believe that changing governors means anything, that it will have any effect at all.

We fired Gray Davis for, essentially, incompetence at his job. We replaced him with Arnold Schwarzenegger (a replacement I did not endorse), a man who --- while he plays a better game in the sense that he sells himself better to the public, and makes a great show of doing a better job -- has not been any more effective than Gray Davis was at solving the entrenched problems of state government. In retrospect, firing Gray Davis was a mistake. Prospectively, it makes it hard to care about gubernatorial primaries, or gubernatorial elections in general: it seems probable that no governor will be able to do a good job. So what's the point in picking?

I spent all of Tuesday, except for brief intervals, at a polling place. Running a polling place, in fact. Better: running two polling places, as the inspector for one of them resigned unexpectedly about three weeks before the election and the county elections people called me and asked 'hey, can you do both'? This was easier than it should have been because the judges on one of the boards was a fantastically effective woman, a former registrar from CSUEB, and was able to take over most of my duties for me, allowing me to focus on the other, more inexperienced board.

There were, as always, some problems.

It's a long day, election day is: you have to be there at 6am, you're lucky to get home before 10pm, and while lots of it are boring, you have to maintain energy the whole time.
It's more fulfilling, though, when it's an election you care about, and when people vote.
This election was more frustrating than fulfilling; I didn't care, and virtually nobody voted.