"Cleans and refreshes without soap or water."

Topic: Get off my lawn. Yes, so, well, the odometer of my life tripped over another number yesterday. Yay me. Pouring down rain the whole weekend, and barely left the house. Feh. Can't I even get a bike ride on my birthday?!?!? I'm moving to Seattle where it doesn't rain so much. I did mount the new cassette to the new wheel, but that's as far as I got. I need to spread out a bit for the rest which means outside. I don't want to get grease, dirt, sand, &c on the rug. I've go to mount new brakes and swap the tires and I think I'll be ready for the ride in July. Oh, I need to mount the new cleats, too. I suppose I could have done that.

Was going to go out Saturday night, but couldn't make myself do it. Ditto Sunday. But a friend came over and brought a Cookie Puss&reg;. I'd never had one. It was good. 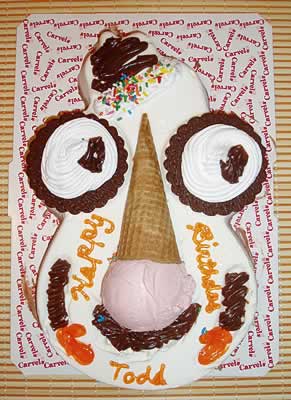 As I said, it rained all weekend. And you know what that means... my phone is acting up again. I called and got the "inside line maintenance" plan added on Friday, but there's a five-day waiting period before it goes into effect. The line seems to have firmed up a bit in the last hour or so, so here's hoping it will continue to work.

Oops, nope... it's out again. I see a Verizon truck out front, though. Maybe he's playing with wires down on the corner.

Book: Agatha Christie: The Woman and Her Mysteries by Gillian Gill

(The amazon.com page is wrong, the author is "Gillian Gill".)

This is an examination of Christie that tries to reach some conclusions based on what she puts in her writings. There are some terribly long winded passages deconstructing some of her novels which really should either be shortened up or reworked in some way. I’ve read less than 25% of Christies works, and even though I’ve read a fair few of what Gill deconstructs, it’s was still pretty tough slogging.

That said, there is some good material here, mostly having to do with Christie being a "modern woman" interested in equality and having a career of her own. This isn’t really surprising to anyone who’s read her stuff. But I’m not sure that you can infer her character from her novels, especially considering she’s had over 80 volumes published. A great deal of time is spent analyzing the Westmacott novels, especially Unfinished Portrait which was supposed to be semi-autobiographical.

The obligatory chronology of her life is presented, then analyzed by what she was writing at the time. Even so, there is no new revelation regarding her 1926 disappearance and claimed amnesia. The presentation is academic in style, and not a particularly easy or fun read. Informative in several ways, but I don’t think I know Agatha Christie any better than before.

Film: Witness for the Prosecution

Leonard Vole (Tyrone Power) is charged with murder and hires Sir Wilfrid Robarts (Charles Laughton) to defined him. As with most Agatha Christie stories, the time of death is one of the most important clues. Vole’s only alibi is his wife, Christine (Marlene Dietrich) who suddenly appears as a witness for the prosecution swearing he came home 30 minutes later than he claims.

Why does she do it knowing he will likely be convicted as a result? Or will he?
This has a very good double double cross ending, one of which I saw coming, the other I didn’t.

Power and Dietrich were very good, indeed. Laughton was overacting, and  Else Lanchester was sort of okay. Still, it’s a very good story (as most Christie stories are) and well worth watching.