Inside: Jester comes back, I move out, I get sick, I get better, I watch satellite TV... Oh, and pictures of kitties!

Jester came back to Beijing at the beginning of June. I wasn't really expecting this to happen, but apparently the company he was working for in Thailand hadn't paid him a dime. The only thing they did pay for was the apartment that he lived in. Since Jester came back with only a couple weeks warning it caused some logistical issues. Namely, Sober was living in my old room and I was in Jester's. To remedy the situation, I moved out. Now Sober and Jester are roommates.

So where did I move to? I moved in with Very. (it's not as bad as it sounds)

You see, Very was shopping around for a new place on the east side in May. She found a nice two bedroom in a sweet location and suggested I move into the second bedroom so I could help offset the cost for the first two months (since I'm leaving at the end of July, tentatively). Long story short, I decided that I was okay with the arrangement and moved in at the beginning of June.

I'm now living in the southeast corner of town just outside the second ring road. I'm walking distance from two subway stops, one of which is a transfer station. I'm about a 13 RMB taxi ride away from all the bars and discos. That's with the new 2 RMB per kilometer pricing structure. Oh, and all the nice restaurants and Western style grocery stores are super convenient over here. Essentially, this is the Shanghai-esque part of Beijing.

Very and I are sharing the apartment but with our own bedrooms. Oh, and all three kittens are here.

Very and I are living with three kittens. The original, Lady Macbeth, and the newcomers Red and Whisper. Lady seems to be a little leery of the new arrangement. She's become standoffish and catlike. On the bright side, you can always get her to come to you by turning on the sink faucet in the bathroom. She really likes to drink from the faucet when it's running. She's also prone to poking her head into the shower when you're bathing and if you don't put the seat down on the toilet she'll drink from it. We're beginning to suspect that she's a dog dressed up like a cat.

Red and Whisper had a rough first month. Whisper got over her sickness first and has more than doubled in size since we found her. Red still has a problem with her right eye, but that seems to be breaking this week. She's still the smallest of the three cats even though she's maybe two weeks younger than Whisper at most. Very things most of her problems are because she was the runt of the litter. We can't be sure of this, but we are sure she was weaned too early. Every once and a while she tries to nurse on Whisper. Whisper just lays there and takes it. It's really bizarre.

Lady Macbeth, aka Monkey. This cat is like five times bigger than she was in this diary. 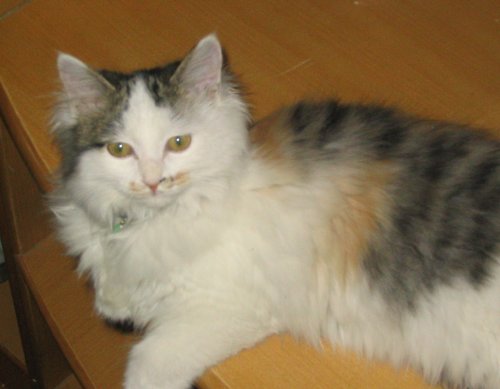 Red Runt, aka Red, aka Tiny Whiny, aka Whiny McScratch. Blending in with the wood floor... 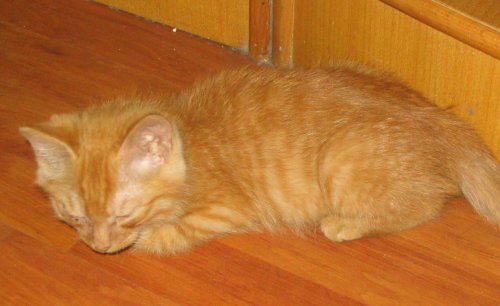 Whisper, aka White, aka Gorby. Chillin out in the litter box (don't worry, it was clean). 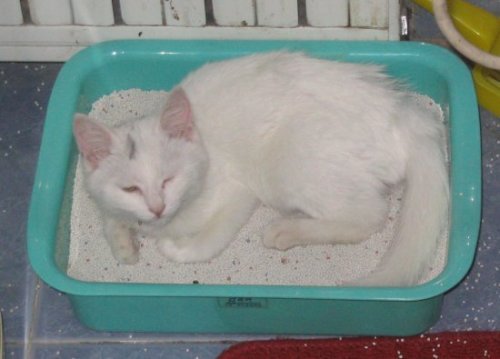 Here's a good story that's right up there with slozo's story of the donkey-derived medicine.

At the beginning of the month, Very had some visitors from Malaysia staying at our apartment. It was a middle aged woman and her 8 year old son who goes to school here in China. She was here looking for a new school to send her son to and he was with her on a short vacation while switching schools. They did several touristy things on their own that Very and I skipped out on save one.

We went to the Badaling Safari World.

The Badaling Safari World (八达岭野生动物世界) is your typical lions, tigers and bears safari park. Except it's in the northern part of Beijing and the Great Wall is visible from inside the park.

So here's the meat of the story, so to speak. To see the park, you ride a bus through the various pens filled with dangerous animals. At the front of the bus there is a sign that says (in Chinese): "Live Chicken 30元" and "Live Sheep 300元". We weren't sure why they were selling live animals to visitors until we stopped in the lion pen.

The lion pen has about 20 or so African lions in it. Next to it is a restaurant with windows that look out into the pen. There is an electric fence between the lions and the windows.

So we stopped in the pen and our tour guide asks us if we want to buy some animals to feed to the lions. Due to the fine leadership of one of our fellow tourists, our bus managed to come up with the requisite 300 RMB for a live sheep. We waited anxiously as our guide summoned a guy to the top of the restaurant with a live sheep in tow. When we were ready, he tossed it into the pit. The lions ripped the thing in half in about 5 seconds. Most of the lions feasted on the entrails while the larger males fought it out over the meatier parts of the carcass. It was pretty cool, all told. We got some video on Very's camera that I have yet to see on a computer screen.

But that's not all. At the end of the bus journey, they drop you off at the far end of the park so you can walk back through the park and visit the animals that don't want to eat you. On our way back through we stopped at the lion pen restaurant for lunch. While we were eating, another bus packed full of tourists pulled into the lion pen. It stopped there for a while and then all the lions started crowding around the windows of the restaurant with their heads raised. We grabbed Very's camera to shoot some more video. The results were even better than before. The sheep was dropped into the middle of the lions. As they ripped it to shreds, blood sprayed on the window that I was watching from. I stood there in awe laughing and trying not to curse in front of our 8 year old companion.

As it happens, Beijing has really poor air quality. In fact the air is so bad here that I'm now quite sure that I've developed asthma. Thankfully, I don't have an asthma attack every time I go outside. Instead, I have an asthma attack whenever I spend too much time around Very's kittens. You might recall that I'm living with these cats. Despite the fact that my room is strictly no cats, I got sick again. I got the same nasty bronchitis/lung whatever that I had back in March.

Bronchitis sucks, but this time I was prepared. I marched over to the nearest drug store and got myself some antibiotics. Well, it wasn't that simple. I taught myself the word for antibiotics before I went to the store but that wasn't enough. The lady behind the counter started busting out boxes and asking me if I'd taken them before. I didn't recognize anything, so I bailed. I called up Spy and asked for some help. He taught me how to say Amoxicillin (阿莫西林). I went back into the pharmacy and asked for Amoxicillin. The lady pulled a box out. She asked me if I'd ever taken it before (ie- do you know what you're doing?). I lied and told her yes. I tell you, it's too easy to get antibiotics in China. Nine RMB later (about $1.15), I had half a course of antibiotics.

My infection is mostly gone now. To keep it from coming back, I'm also taking Atrovent to deal with my asthma symptoms. This was also trivial to acquire. The combination of allergy and asthma meds seems to be quite effective in staving off the fatal allergy attack that the kittens would be causing.

Both Very and Cookie had their birthdays in the same week. For Very's birthday, I staged (with much assistance from other friends) a nice dinner with 13 of her friends. I also fixed her computer and got her an external hard drive with Spy's assistance.

Cookie's birthday was a little less spectacular. The night after Very and I got back from our death hike, we met Cookie, Jester, and four other friends for dinner. Afterwords we went to Cookie's apartment to hang out for a little while. Then Very and I went home to pass out.

One of the reasons Very moved to the east side of town was because the school she was working for folded. So she didn't really have a reason to live down the street from it anymore, especially when all her other teaching work was costing her half her pay in cab fares.

The service works pretty well and if the bootleg card in the receiver ever stops working, Very just has to call the installer guy up and he'll replace it. That's right kids. $250 US gets you satellite TV until the guy you bought it from gets run over by a bus or locked away in jail. Not too shabby.

So now we can watch all kinds of great English language programming, with some Tagalog shows thrown in for good measure. We even get the Cartoon Network. Truly, this is a great and civilized corner of the earth.