Very and I went camping on the Great Wall again this weekend. The only difference was that we didn't actually sleep on the wall this time. Instead we and our 8 friends slept on about 10 meters of ridgeline.

Luckily we all survived unscathed. This is our story. (with pictures!)


We left Beijing on Friday night around 7pm and got to the wall around 9pm. When we got there, it was dark of course.

The hike started off easy enough. The going was steep but manageable. As the trail got steeper and rockier we remained confident that we were on the right path because of the numerous red up-arrows painted on the rocks.

At about the two hour mark we must have strayed from the trail. We were still following a trail. There weren't red arrows anymore but there was ample evidence of recent human contact (ie- Littering Chinese People). Progress slowed considerably. The trail got so steep that falling rocks became a concern for the people bringing up the rear (your humble narrator included).

At about 12am, we heard good news from our lead man. He was at the top of the mountain and we only had about 50 meters of climb left. When we got to the top we realized it wasn't exactly sunshine and rainbows. The trail had topped out on a brush covered ridge that was barely enough for our party of 10 to stand on.

We decided that climbing down in the dark would be foolhardy at best and waiting four hours for the sun to come up was our best course of action. Everybody snacked on food for about 20 minutes before settling in for some sleep. As I was unpacking my bag, I tossed a sleeping bag down in front of me. It bounced a bit and went over the edge. We heard it fall down the mountain for about 15 seconds.

Sleep didn't come easily, but we all got a couple hours each.

At 4am twilight began to break. I was awake at this point due to my inability to sleep in such an uncomfortable position. On a ridge opposite ours, I could see lights moving around. As the sky lit up more, I could see that they were coming from a lone watchtower with no visibly connected wall.

I got on my feet about 5am and took some pictures of the surrounding ridges.

Here's the section of wall we would have camped on if we hadn't missed the fork in the trail. 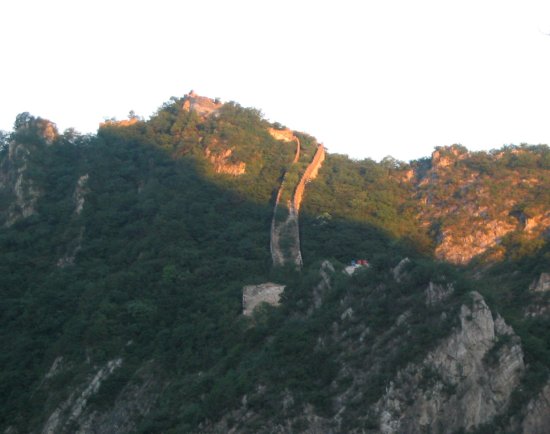 This is the lone watchtower that I saw lights on. 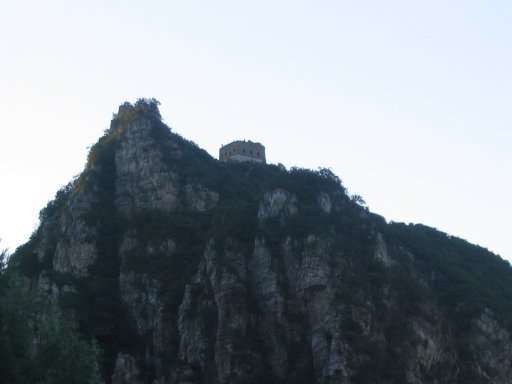 This is a fellow camper demonstrating her sleeping arrangements. 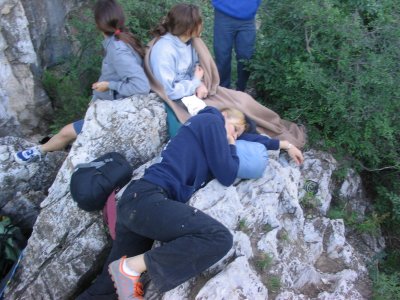 At some point, our lead climber from the night before struck off down the side of the mountain opposite the one we climbed. He was in search of a possible alternate route down the mountain but he was also keeping an eye out for the sleeping bag dropped by yours truly. About 30 minutes after he left we began to hear shouting from below. Apparently he'd located the sleeping bag by sheer luck but he'd lost the trail that used to get there (there wasn't really one to begin with). He eventually made it back to the top with sleeping bag in hand. He remarked that our shouted replies were extremely unhelpful in helping him find his way due to their echoing off surrounding rocks.

We began climbing down the mountain around 7am after eating a tasty breakfast of muffins and apples. Two girls in the party had struck off for the bottom about an hour or so before. Hiking down wasn't so bad in the light, but it was still pretty sketchy. Luckily there were plenty of trees along the path that could be used as hand holds. About 45 minutes into our descent we found the missing fork in the trail. It had been conveniently marked in extremely messy Chinese (长城->) on the uphill facing side of a rock.

Our group split into two at the fork. Those who really wanted to walk on the wall went back up the mountain after dropping off their gear in a safe place. Myself and Very and one other girl headed down to the bottom. We were tired and had all seen the wall before. After hiking another two hours we came to the parking lot where we had been dropped off the night before. We found our two fellow campers who hiked ahead of the group and laid down to take a nap until our driver came to fetch us.

The parking lot was next to a fish farm, so in between naps I took a bunch of pictures of the fish. Here's one of my favorites: 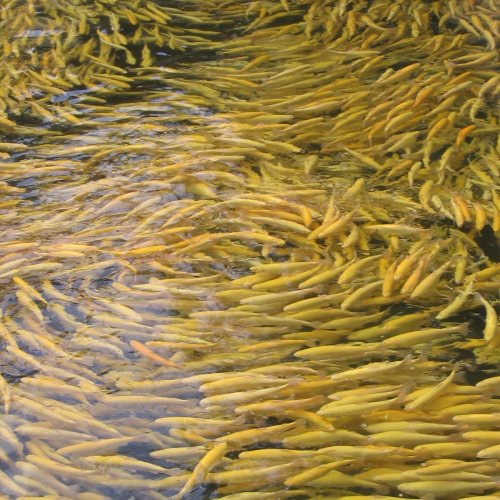 We headed back to Beijing about 2pm on Saturday. All in all, people were pretty happy with the excursion. Other than really sore legs, nobody sustained any injuries. We didn't get to camp on the wall, but we did see the wall and we came away with an interesting story.