By Christopher Robin was Murdered (Mon Jun 12, 2006 at 12:14:37 PM EST) (all tags)
A contest of champions . . . competitors from around the globe . . . a struggle for supremacy. For the winner, fame and respect; they shall be adored by the millions and their cup overflow with the milk of joy and life. For the losers, ignominy and disgrace; they shall sup on not but the bitter ashes of regret and humiliation.


Update by ana & hulver - now, with author names, and results!


At 5:00, Manhattan Mean Time, the first phase of what it indubitably the greatest undertaking ever undertaken in the modern era – WFC2: Damn Write! – came to a close.

Many were called and, when the dust finally settled, the following stories stood upon the WFC landscape like towering monuments to literary genius.

Ladies and germs, I present to that colossal cache of captivating chronicles, that powerful and perplexing pile of prose, that superb stockpile of stories we call: The Entries.

Now, boys and girls, one of these seventeen stories is a true masterpiece. It represents the unfettered potential of human genius and craft when alloyed with keen insight and imagination. But how do we know which on is it? We vote! Using the poll in this diary entry vote for the stories you liked best. This is democracy, this is mob rule! This is the way literary merit should be always be decided: by cage match! VOTE NOW!

What? You say you've voted for your favorite tales of the end times and you've still got a throbbing, burning, yearning to vote some more. Well, true believers, as a limited, one-time offer, just for you ('cause I like you face), you can now vote on cover treatments as well! Yes, hot damn.

Here are the cover treatments in all their glory. I do need to warn the faint, the overweight, and people with pre-existing heart conditions: these cover treatments are so powerful, each and every one a gleaming fragment of the Sublime, that CRwM will not be held responsible for any injury or death that may result in viewing them. You or your next of kin can take that up with theantix.

Without further ado, the cover creators and their works:

Just how badass are these covers? Their own mommas are afraid of them, that's how bad they are. And they freakin' triple dog dare you to vote for your favorite cover in the poll. Go on. Do it. What are you, scared? Is that what they taught you in that fancy school of yours?

Because we can't stop you, you can vote for as many or as few titles as you want – but only a complete and total blowhole would abuse that system and whatever happens to said blowhole, especially if it involves using a large metal pole to bifurcate their left foot, is well-deserved, but in no way condoned by the management of WFC2: Damn Write! 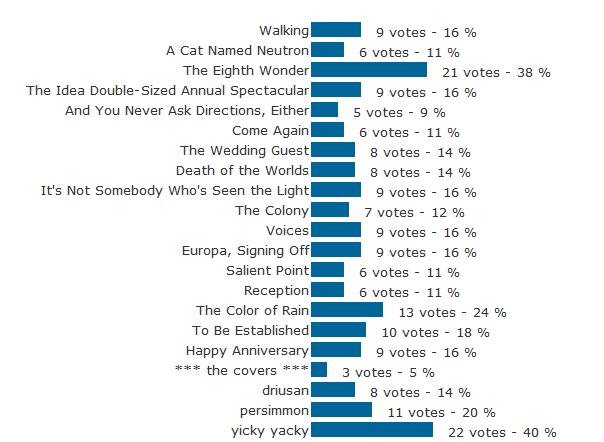