By ad hoc (Tue May 09, 2006 at 10:21:23 AM EST) cycling, books, market research, reach out and touch someone, food (all tags)
I'm reading Tono-Bungay by HG Wells and even though he's one of my favorite authors, I'm having trouble getting into this one.

Great weekend. First century of the year and I'm nowhere near as sore as I expected. I'm quite tired, though, but mostly due to getting up at 4:00 am to be there at the start. In spite of that, I started 15 or 20 minutes late, so did most of the ride by my lonesome. I did ride for a bit with a woman named Linda from Australia doing her first century, but she pulled ahead on a downhill and I think she missed a turn because I didn't see her for the rest of the day and I would have run into her at the rest stop that came shortly after the turn. One guy at mile 18 taco'd a wheel, so his day ended early. That's one of the problems with wheels with few spokes, they don't really withstand lateral forces well.

Anyway, it was a slow ride, averaging only slightly over 15 mph, but it was the first of the year with a steady 15 mph headwind most of the day and (insert random other excuse here).

This ride was in Portsmouth which is about a hour or so from here, so I got to listen to two hours of XM Radio's old time radio station which was cool. Suspense, X-Minus 1, Gunsmoke, Murder at Midnight and one or two others. Stopped at Kelly's Roast Beef on the way home which I probably shouldn't have done since it's way too much food. Good day, though.

But, as I say, it was a picture postcard beautiful day. Cool and windy, but not a cloud in the sky. Saturday, I'd bought a new Headsweats® cap, but forget to wear it. That, combined with a haircut early last week, resulted in a sunburned head in the pattern of Bell® Ghisallo helmet vents. 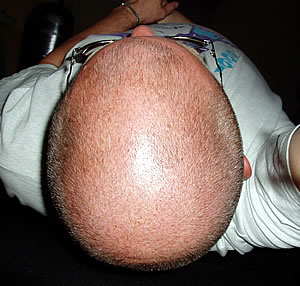 I had the strangest phone call last night. Someone named "Pasqual" (or however it's spelled in Quebecois) called me from Montreal.

"This might seem like a strange call," says he.
"...," says I
"I'd like to bring my girlfriend to Boston for a nice weekend, but I don't want to get sucked into all the touristy stuff, so I'd like to know if you can tell me anywhere to stay and go."

Interesting way to do research. Since I work at home alone and it can be a little isolating, I'll talk to just about anyone who telephones provided you're not trying to sell me something. We talked for about a half hour. He's 22 and wants to spend about $500 CDN for the weekend. I'm not quite sure what a "weekend" is (one night? Two? Three?). He said I was about the fifth person he'd called and was the only one either at home or that would talk to him.

I told him he should probably stay in Back Bay and not downtown as it's mostly a financial district and dead at night. I told him to stay at either Copley Plaza or the Charlesmark, or if he wanted to go to a bit more touristy area, Omni Parker House.

He asked for a nice bar to go to, so I had to query a bit about what he meant by "bar." That's when I found out he was 22. His gf likes dance clubs, so I said to head for Lansdowne Street (particularly Avalon / Axis) and go wherever looked interesting. There are drinking spots in Quincy Market that seem popular, but they're just for drinking, there's not much dancing or anything else there, IIRC. But then, I can't really remember the last time I was in a straight club, so I could be way off the mark. I do know Lansdowne can be fun, though.

I hope he has fun. I wonder if he'll come out the other end of that weekend with wife-to-be.

This morning I went to a focus group at a nearby marketing research company. Well, not a group, really, as there was only me. Some thing about trying to decide on a layout for Fidelity's new retirement research offering or some such thing. Basically, "which set of charts and graphs look best?" Anyway, there was some not bad coffee and they gave me a crisp Benjamin plus a less crisp Ulysses for the hour, so it's all good.

What struck me, though, was the magazines in the waiting room: Martha Stewart Living, Time, Good Housekeeping, The Sporting News, and Current Colorectal Reports. I didn't have time to read any.

The paper has two articles of interest about my neighborhood this morning.

At Trader Joe's yesterday, I bought a box of the British sensation, Weetabix¹. I say, that's a jolly scrummy box of nutritious cereal. A smashing bit of all right, eh wot? Goes soggy a might quick, though.