Was looking up digital comics lettering techniques and found a pretty good article on balloontales.com.

Then I came across this page, which has a pretty neat discussion between a bunch of comic writers about writing/lettering techniques and how they've evolved.

It focuses largely on how thought balloons and sound effects have nearly died out in comics today. As Kurt Busiek says:

Thought balloons are almost dead, flashbacks are often discouraged, third-person narrative captions haven't vanished, but they've diminished to the point of standing out where they're used -- unless they're used so minimally that they're the sort of thing you'd see in a Jack Ryan movie, identifying a place and maybe a time, little more.

The rationale for all of these is usually film rationale. They're all novelistic tricks, well, thought balloons aren't, per se, but articulating the character's thoughts, often as directly as dialogue, is.

It's interesting to hear some accusations that those who dislike thought bubbles or sound effects have some amount of embarassment about the medium. I suspect this is true to some extent, however I also think it depends heavily on the age range you're writing for - young kids will probably prefer reading thought bubbles over first person narratives. Alternately, there may be those who think that comics that take themselves too seriously are embarassing.

Me, I think writers like Eisner, Miller, Moore, Spiegelman, Azzarello, etc., have shown the medium can be taken at least as seriously as film. So if you're writing for an older audience, or telling a more serious story or just shooting for a certain tone, then you probably would avoid some of the more "comicy" conventions.

On the other hand, the majority of comics published are for a younger audience... I think it's too bad current publishers think the stuff aimed at 10 year olds all should try to be like Dark Knight Returns.

Now that 24 is over for the year, I was fortunate that Hill St. Blues season 2 just came out on DVD to give me my TV fix. So far, it's not quite as good as season 1. Some interesting plots get started and never take off. The main arc revolves around a public defender's death, with Furillo trying to help Joyce though a bout of cynicism and hand-wringing over the deterioration of the inner city. The writers seemed to have the most fun with Lt. Hunter (the swat team commander,) constantly pushing the politically incorrectness envelope in his pontifications on the state of the country.

A good example is a scene where Esterhaus and Calletano are discussing the latest turn of events in negotiations between the police union and the city. The city refuses to improve its contract offer and the union threatenes a wildcat strike. Hunter overhears the conversation and interjects:

Hunter: Just another light-loafered step on the road to socialism.

Hunter: Those union wags have cream of wheat where their bone marrow ought to be. Can you imagine what kind of republic this would be if the civil employees were allowed to strike every time a dental plan dropped a molar or two? I am talking about garbage in the streets! The Pravda in every every newsstand, and a gol-darned land bridge to Cuba.

Esterhaus: But what choice do we have?

Hunter: No choice! Mon ami, let's all take our blues and put them in mothballs and climb into some warm pjs and play peanut ball for the rest of the fiscal year, while 45,000 of your bown types go on a discount shopping spree.

Calletano: Would you care to repeat that, sergeant?

And finally: When on Romulus... 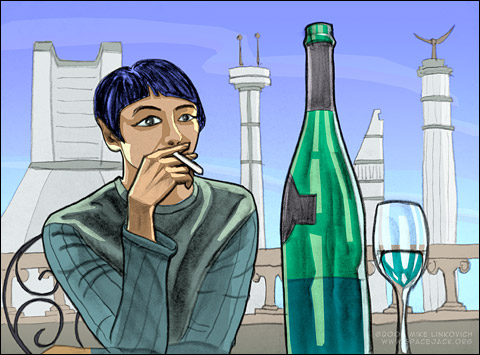 Next up, a scene starring MissTrish. Although I wanted to start it first, I somehow pulled a muscle in my back between my shoulder blades, and it actually hurts to draw on the easel. Thus my line work was suffering pretty badly, so instead I did this one last night, quickly, without a whole lot of planning or re-dos. I also dipped into a universe I probably should have avoided for the sake of my own self-esteem.

I tried a Robax today, and that actually seems to be dulling the pain pretty well.