Droids in the alley

Walking home from work one night, I was once again surprised by the things people will leave unattended in this city. 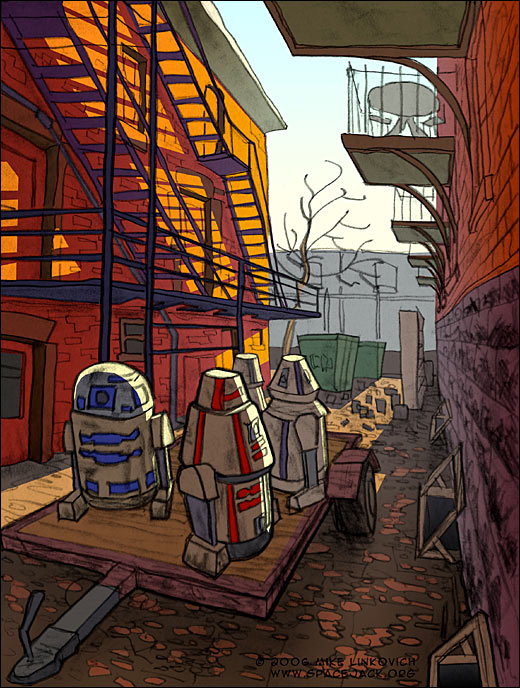 I could've switched on one of those R4 units and told it to follow me home.

This drawing took a little longer than I would've liked. Due to all the colouring detail, it was getting into the ballpark of the time it would take to paint a small painting. I might have an easier time just switching over to ink so I'd have more magic-wandable areas to fill. Also, Photoshop needs a more sophisticated gradient tool.

On Wednesday, went with the Shawshack crew & friends to see a crazy installation at the Textile Museum, made up entirely of bugs. That was a fun and unexpected diversion, including the dinner after.

I was thinking that doing some more cartoons with other 'shack members would be fun, as they're still young, attractive and dress in interesting ways.

Finished reading the Essential Silver Surfer. Buscema's artwork is pretty awesome in that, particularly when he lets loose drawing Mephisto and his Hell-dimension or kingdom or whatever. This series was one where Stan Lee let his imagination run wild with youthful concepts of science and the metaphysical, and logic is all but abandoned.

Sadly however, having a whole title based on the idea that the hero is constantly misunderstood by earthlings (and vice-versa), the stories gradually descend into a grating routine. By the end it's "which guest-starring Marvel hero will misunderstand the Surfer's intentions this time so we can watch them fight for an entire issue?"

I thought the first few issues were the best. The origin story contained something of interest, considering that the series dates back to the late 60s: before becoming the Surfer, Norrin Radd reviews his planet's history using a device not unlike a holodeck. I wonder when the first instance of something like that in (science) fiction was?