Friday, I spent all day couriering on my beautiful new bike. 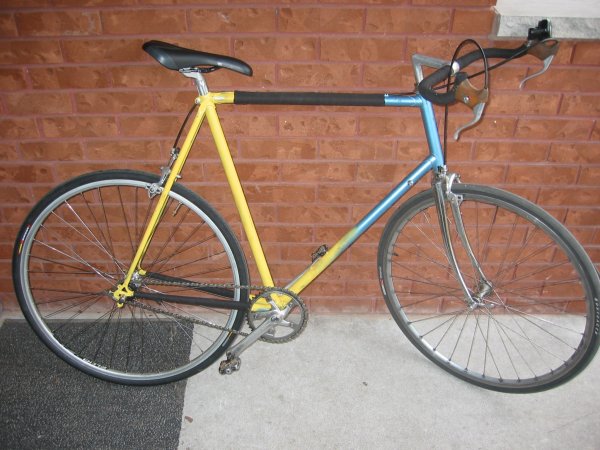 I'm still not decided on whether or not i will be purchasing a larger chainring for the front. On the old Trek I was riding 52/20, which Sheldon Brown's totally awesome gear calculator tells me is almost exactly the same as the 42/16 I am riding on the new bike. I have however moved up from 170mm to 175mm cranks, so i could move up to a 46 on the front without significantly increasing the amount of work per pedal-cm that i am used to. we'll see.

when i got home on friday night, my back was incredibly sore. on misslake's advice i took some muscle relaxants. these succeeded wonderfully at making my back hurt less but had the unfortunate side effect of making me feel less rock and roll.

as such, i considered it a reasonable plan of action to chase the muscle relaxants with half a bottle of sake and three fingers of delicious dark rum.

thusly invigorated i fled the shawshack on skateboard in the direction of the gala opening for the art exhibition in which good friend M had several pieces. about halfway there it occurred to me that i had been particularly foolish in not bringing more alcohol on my person. so i stopped in at the canadian government operated beer vendor and considered my options.

as i took in the intimidating array of beer choices and lamented that there was a "sold out" sticker brazenly covering the square in the grid marked "Tiger" i heard the gentleman in front of me order a case of PBR.

capital idea, thought i. i had not had pabst since i was in manhattan nearly two years ago. when i reached the teller i asked for "a six of pabst, please."

"pabst only comes in twelves," the spiteful wretch informed me.

i panicked. and, of course, ended up buying a twelve.

and so i drank one of bottles en route while skating and carrying the eleven-pack. upon arriving at the Kensington Market gallery, the question of what to do with all this beer became suddenly very real. in a moment of genius, i decided to hide the bottles for myself in various places around the eccentric little neighbourhood. two under a dumpster here, one in a rose bush there, etc.

over the course of the night, i coralled various people to come out with me on an easter beer hunt and am pretty sure that we managed to polish off all of them except for the two i hid under someone's front steps on Oxford Street. perhaps i will go by tonight and see if they are still there.

the art showing was a good time. M's pieces were great, but i had already seen them. A lot of the other stuff was pretty mediocre, but i guess that's the way with art. still, there was a fun crowd of people, including some close friends, and i was quite drunk (not to mention a little whacked out on muscle relaxants).

after i had had my fill of the gallery, i coralled those i held dear and we headed down to queen west to take in a performance by The Greater Good, side project of SMUT guitarist Wooden Jim.

there, i was pleasantly surprised to run in to a particular girl who i love very much but have little occasion to spend time with since she decided to stop being a filthy punker and instead become a lawyer.

she challenged me to a game of scrabble then and there, which i was unable to refuse. on the very first play, she laid down the seven letter word "rakings". i immediately countered with "feaster".

though i consider myself the real victor as i let an early game "ew" play slide.

much of saturday was spent recovering from the previous nights ill-advised but totally awesome excess. also, cleaning and rearranging the shawshack. come saturday evening, erso showed up unannounced with a moderately sized entourage and, as the evening progressed more and more people called him to see what was going on and were consequently invited over to the shawshack. it was a quite a pleasant little unexpected party. slight shortage of dwarves and wizards however.

i turned in somewhat early in the evening in the hopes of getting in a couple of early morning games of tennis. the weather however did not co-operate.

instead, the day was spent nerding out with E and then later cuddling up with her, misslake and MissTrish for some firefly. that was followed by laundry and the most entertaining flamewar i have ever participated in. which culminated thusly:

that brings you pretty much up to date. later today i skip off early from work to help ND convert his bike to a single speed and then rendezvous with Driusan for NHL 2004 and perhaps some tasty beverages.

but for now, back to the php.