She's always had a sweet rack, but her bosom has become especially scrumptious now that it's in the dairy bar business. It's like a temporary breast augmentation without silicone, and I admit that the change speaks to me on a basic level. 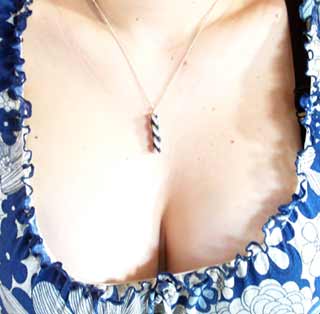 Naturally, there are those who might suggest that my appreciation taints the holy relationship at the heart of the change -- the purpose of her inflated tits being to serve as an alimentary lifeline for our month-old son, of course. Nevertheless my wife and I have never been ones to deny the earthier aspects of the reproductive process, so neither of us feel that my knocker-inspired lust is an element of pollution. Rather, it demonstrates the great interconnectedness of things for it is conceivable that her mammary swelling may be designed to a dual purpose: to feed the child and to retain my fascination.

I have always had a weakness for feminine curves. It can't be denied.

I remember a swarthy Turkish girl in life-drawing class whose ample assets were sufficient to keep my eyes glued to her throughout our sketching sessions rather than on the naked model posing in the centre of the room. I was willing to overlook various deficits for the love of her hips and lamps, including but not limited to her overall hairiness and the fact that she was too shy to speak to me. I awaited with relish the moments in which she would lean over her artboard to scrub out unwanted lines, the brisk motion of the erasure transmitted in undulating waves through her swaying melons.

I wonder what her name was.

The first time I dated a girl with C-sized orbs I honestly felt like their first unclad presentation should've been heralded by trumpets and drums. I was very impressed at first, but ultimately dissappointed because she wasn't a "breast girl" -- in other words, while I derived great satisfaction from playing with those wondrously gravity-defying teenage skin pillows she derived little or none. She sported a freckled bust with nipples of such a pale pink that they almost matched the rest of her skin. I enjoyed watching her shower.

I've nibbled on A; I've squished B; I've cavorted with C; but my favourite remains D.

I married a girl with D cups -- a girl titillated when I play with her D cups -- and I think it's a wonderful bonus that for a while after expelling children she goes Double-D. She may be too tired to mambo with me as often as either of us would ideally like, but at least when she does it's pornotastic.

(The less squeamish of you may wonder whether or not there's a lot of milk involved. There isn't. In order for my wife to serve dairy she needs to be in the appropriate mood. To express milk for later consumption she must close her eyes and pretend she's feeding the baby instead of a noisy little battery-powered suckbot. When we're feeling frisky, in contrast, the milk stays put.

(For the purposes of scientific investigation I did taste my wife's milk shortly after the birth of our daughter. It was sweeter than I had expected, like tea mixed by a kid. Not bad at all.))

The infant screams with colic and the house is a mess; our daughter throws tantrums for want of attention and I'm exhausted from my new job; creditors loom and my paycheques come in too slowly to appease them -- and yet it is hard to be chagrined when I can bury my face in my wife's expanded cleavage, lost somewhere between hard nipple and milk-taut swell. As in so many other situations, it is important to stop and smell the roses.

Hurrah for hooters, I say. Hurrah!

So say we all.