If you don't wear glasses; discuss tax (cough), gardens (cough), display stickmen (cough) and appeal to the Senate (not really)

We cop double property taxation from the county and town. Local politics works .... the town politicians live in the town and suffer the same things others have. Increasing property taxes and massively inflating property values. They are looking to turn the town into a city. This means the county cannot tax in their boundaries. This would take away the double taxation on a non-liquid asset.

Much mulching this last week. Our garden is coming back to life and I have respread mulch where it was thin from last year. I like to make our garden beds lumpy - like mini swales - and mix up the textures on them. So I use rocks, pebbles, pine bark mulch and cyprus mulch to contrast colours and textures. It makes the beds look more like a natural dirt.

We have bought a bunch of plants and trees. I have also broken off ground runners to replant them in other other locations too. Our backyard has a new plum. We have planted stuff like pansies, african violets, impatience (pot plants only - hate them in gardens), tickweed, etc etc. Standard stuff.

We also planted a bunch of vegetables from seed and in pots. Tomatoes, squashes, potatoes etc as well as carrots and corn. I like the idea of the garden being both productive as well as visually pretty so the vegetables are mixed in with the decorative plants.

We also planted a new fruit bearing plum tree. Last saturday we bought an Obelisk. It is a garden ornament about three feet high. It is now out the front amongst the phlox and other ground runners.

Ha Ha his head is burning

That will teach him. 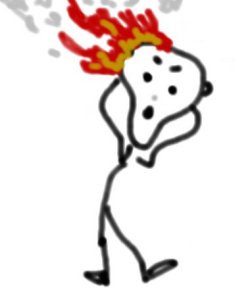 256's lyrics rock. They would have to be the most singable stanzas of text I have come across - since whenever. I suggest in future MFCs that 256 (and others skilled with words) dump a bunch of lyrics into the MFC thread for people to make music too, or around.

Yes Inflammatory heading. Some discussion on whether their should be a Senator for the Australian Diaspora.

had said in Imagining Australia, where we proposed that expats have a dedicated person in the Senate, but no House of Representatives vote.

As I said above, the idea of specific expat representation in our national Parliament needs more public debate before it is likely to be accepted in Australia.

However, as the Senate Inquiry report acknowledged, we grossly undervalue our expat community, and this would certainly be one very significant way to keep people linked to Australia during any extended time away from the country.

In addition, having a representative specifically focused on the issues and views of expats would give them much better representation that is received by the small number who are enrolled and vote.

If the government is truly to understand and represent our interests in foreign policy, defence policy and immigration policy - wouldn't they be better served by giving us an electorate and a direct representative in parliament? Absolutely IMO.

Hence Number 3; Ensure we have an electorate that is external to Australia, and a representative in Parliament.

We are all agreed - except for many of the commenters in those first two links ....