Took Small Boy to Chessington World of Queues yesterday. Very busy - including a huge number of foreign Jewish people (judging by accents) with the traditional hats & stuff. Clearly some sort of multiple coach trip thing. Queues were hideous, but even Baldrson would find it hard to blame the large Jewish contingent for the new "express pass" policy.

The way it works is this: if you pay a few more quid (over the already exorbitant price) then you pre-book onto the rides. Great. Except that when they set no limit on it, the people who don't pay the extra (e.g. me) can end up queueing for an hour, then waiting at a gate for 20 minutes while they let all the "express pass" people through - because there's no limit on the number of express passes they can sell. Combine this with tired parents, fractious children and the whole "fun, family day out" experience is starting to lose something.

I am thinking of writing to Tussuad's (who own Chessington) and explaining that their skills in developing antipathy - nay even hatred - towards one's fellow man is approaching that of the Daily Mail. I may even finish off the letter with "please send me a standard, boilerplate 'reply to a complaint letter' letter, preferably enclosing a token money-off voucher for my next visit to hell". They may reply saying "if you want to avoid queueing, then buy an express pass". Well, morons, the problem with that is that everyone does that then you're back to square one. All you've done is effectively raise the ticket price by ... ah, I see.

Anyhow, at least Small Boy enjoyed himself. Sort of: 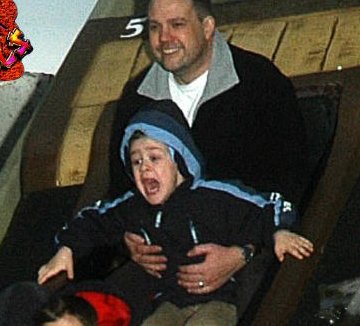 (Note that the person behind him isn't me, just some random paedophile I got to stand in the queue with him).

Timing on the watch, you're talking about spending close to one minute in queues for every second on an actual ride. That and it was £29 for SB an myself to queue for over 3 hours and go on 3 rides. I did win a prize on the old "try your strength" type hammer thing. This is more down to ax(e) technique rather than actual strength.

Oh, and the place if full of working-class types. Can't be doing with that.

So it was really sunny earlier so I figure I'll take the shorty wetsuit when I go wakeboarding. Along with going to CWoQs, this wasn't my best decision of the weekend.

It gets too hot in the room where I have the piano and stuff. I bought a thermostatic radiator valve but haven't quite got around to fitting it - what with draining the heating system and that. Tomorrow (SB is off school and I am on duty).

The BBC News site had this thing: Europe floods in pictures. Now this picture (currently number 6 but may be moved or deleted) caught my eye. Initially because it was captioned as a "water skier" but then looking more carefully, I noticed some things: