My life with a dog

So toxicfur's awesome boss, iGrrrl, has bought the both of them professional massages, which are only just finished as I type. I await the more relaxed partner with great anticipation.

I've tried working the knots out of her back muscles, and I could do it pretty well until $evil_project came along. Now, I can kinda stay even. So this is a Good Thing from a Really Cool Boss.

One attempt in the kitchen earlier this week involved working at knots with my thumbs til they got tired (my thumbs, not the knots), and then gently pounding the muscles with the heels of my hands. Teh Dawg stood opposite watching. After a few seconds, toxicfur began to vocalize, which sound was chopped by my hands impacting on her ribcage. The dog twisted her head.

She does this gesture sometimes, rotating her head about an axis through the nose, to indicate that she knows you're talking, probably to her, but she doesn't get it. This time, I think it was more of a "that's peculiar... should I be concerned you're hurting her?" 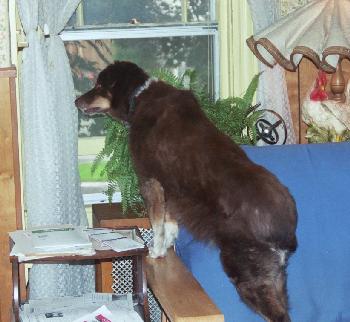 Teh Dawg is an Australian Shepherd, and has a good many sheep management instincts bred into her. Cats, sheep, doesn't matter to her. Squirrels are a peculiar kind of cats to be herded. So anyway, she has Ideas about how a herd should be managed, and though she's not the alpha dog, she expresses these opinions with some force. It's quite intimidating to have a 45 pound dog (has been 65 or 70 sometimes) standing 5 feet away, looking you right in the eye, and growling. Because she doesn't like it that you let the cats get away with climbing into your lap, or whatever.

Often if we're being more friendly than she approves of, she thinks we're fighting, and she'll go get a stuffed toy to try to distract us. With the cats, she just wades into the battle, pokes them with her nose, and herds them into separate rooms.

Oh, and it's almost Easter. The music should be, shall we say, challenging.