By toxicfur (Mon Mar 06, 2006 at 05:29:21 PM EST) $evil_project, Teh Dawg, critters, photos, tattoos, headlines (all tags)
In which I prattle on about $evil_project and a couple of critters, and in which I summon the attention of Kellnerin infidel and ad hoc infidel.

Tonight will probably be a late-ish one again, thanks to $evil_project, and my inability to work efficiently today. Geez. I'm afraid to count how many times I've typed "efficiently" for this project. It just trips right off my fingertips. The argot for a project such as this one is nauseatingly business-speak-lite. The buzzwords are "transformative" and "effective" and "collaboration" and "implementation" and a few that would be a bit too traceable for my comfort. Blech.

If we don't finish this project soon, I'm going to lose what's left of my mind. Especially if $annoying_coworker continues to pop into my office to stare at me and giggle whenever I open my mouth. I thought about throwing my new SwinglineTM stapler at her. It's smooth and has a satisfying heft. I really didn't want to have to explain to iGrrrl why there's blood on the floor of our office, though, or that we were going to have to find someone else to do $annoying_coworker's job. I also didn't want to damage my new stapler.

I'm watching one of the animal cop shows on Animal Planet. Every time I watch one of these shows, I want to adopt every abandoned and abused critter that shows up. I want them even more if they're like, missing a limb, too. Doggie's in little wheelchairs? I'd be all over it. Of course, every time a sad dog cries on TV, Teh Dawg looks at the screen, tilts her head and whines. Yeah, Dawg, I wanna help them, too.

My two older cats, Simon and Sasha, are curled up together in the recliner. They've been best buds since I brought Sasha home, pretty much. Sasha is by far the smartest cat I have. She opens cabinets, does interpretive dances that are remarkably communicative, and has now learned that dead bird and other meat comes out of the microwave when it beeps.

We use our microwave almost exclusively to defrost meat, especially chicken. Sasha waits until it beeps and then turns around and around on the radiator cover next to it until one of us opens the door. She then attempts to crawl in to get the meat. If she's thwarted in her quest, she tries to lick our fingers while pushing the hand working the buttons to get her ears skritched.

Simon is the fat one with white and gray fur; Sasha the gray tabby: 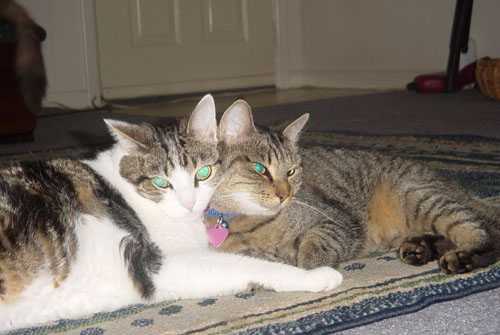 Yesterday, at church, I asked the nice photography lady if there was a picture of the Tree of Life on the base of the rood hanging high above the crossing. There wasn't, that she knew of, but even though I told her I wanted to turn it into a tattoo, she apparently went after Mass to take some pictures for me. So this is what I want for my new tattoo:

I want to get this on my upper arm, branches wrapped around kind of where the contour of my muscle is used to be. Do you think there's a tattoo artist in this town who can do that sort of detail? I want someone with a very light touch, more so than with my current tattoo. I think I'm going to want it in the black and gray, though, to match:

Okay, enough fun for tonight. Time to get back to work for a couple of hours.