Very bought a kitten one month ago. This sounds like a fairly normal activity but then this is China. We went to a pet market that some of her students told her about. As soon as we walked up to the entrance, two or three different people asked us if we wanted to buy a dog. Not so strange except for the fact that there weren't any dogs around. I half expected a guy wearing a trench coat to walk up to us and show us his fine selection of puppies hidden within.

So, where was I? Right, the pet market. We walked around inside there for about thirty minutes and didn't see a single kitten for sale. Some people were selling cat accessories but not the actual animals. There was however a vast selection of exotic fish and even a shop that dealt exclusively in Chinchillas ("Dragon Cats")! We eventually went to an alley extension of the market where some people had puppies and/or kittens. The whole operation was a bit shady. Really though, it was par for the course. It's not at all uncommon to see people like we met in that alley hawking a few kittens or puppies on a busy sidewalk.

Well, Very soon found a kitten that she thought was absolutely adorable. At this point I reminded her that a pet was a huge responsibility and her status in this country is somewhat transient and maybe getting a kitty isn't the best idea... Keep in mind she's got this tiny little ball of fur clinging helplessly to her bosom. I'd essentially forfeited my position the instant we set out towards the market. Very was getting that kitten come hell or high water. She negotiated a reasonable price and we smuggled the little thing back to her apartment via the subway.

It's a month later now and Lady Macbeth - so named because she washed her paws way too much when we first met her - has come a long way. She's settled into life as a spastic kitten. She's nearly doubled in size. Pretty soon she'll have her shots. Have a look: 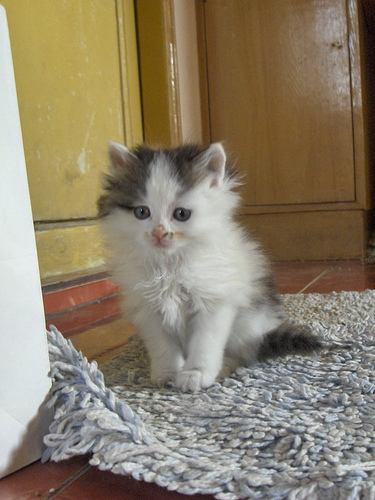 How can you say no to a face like that?

One of the reasons I came to China was to learn Chinese. It's been a rough road but things are finally starting to smooth out. A little. Kinda.

At this point, I speak/read badass (niubi?) survival Chinese. I can get around Beijing with very little difficulty. I can walk into unfamiliar restaurants and order food from the menu that is only written in Chinese and doesn't have pictures. I can take the bus which requires deciphering bus routes written in Chinese. I can buy train tickets and travel to unfamiliar towns.

What I can't do is have a conversation. Well... I've had one sided conversations with taxi drivers but that doesn't count. My vocabulary has holes that you could drive a semi through. My grammar is simplistic. Granted, Chinese grammar is fairly simplistic...

To fix this I've started meeting with my language partner again. I'm determined to get this speaking/listening thing down relay well. My speaking is starting to improve more quickly but I haven't reached what I would consider a critical mass (ie- speaking enough to where I can acquire new words from people who don't speak English). Once I can speak well, the characters will come easily.

So... Here's to speaking Chinese comfortably (not fluently of course) by mid to late June.

Jester got a job in Thailand with his friend's cellphone services company. He leaves next Tuesday for an indefinite amount of time. He will return eventually though... He fucking better. He's leaving a number of his things here in Beijing (not just girls, hah!) and our lease is up in September and I'll probably be gone by the beginning of August. Also, when he renewed his visa he got a one year with multiple entries so he could bounce back and forth between Bangkok and Beijing if he wanted to.

I'll prolly rent his room out while he's gone. In fact, one of Very's friends needs a place to stay right now, so he'll prolly move in soon...

I'm teaching 4-5 days a week right now. It's nice because it means I'm saving money, but at the same time it sucks because I spend almost as much time traveling as I do working. That, and my original kindergarten class has become too comfortable with me. Some of the boys are bold enough to punch me in the nuts. Yeah, tell you what. Nothing sharpens the senses like protecting your balls from the fists of 5 year old Chinese boys. What is it with Asian students and foreign genitals anyways?

Oh, also at that same kindergarten I now take part in morning exercises. I've no fucking clue who's idea this was. I get the feeling the teachers are getting a good laugh out of it... well, except that they're participating too... hmm. I'll tell you what though, the people walking by on the street don't know what to think of the tall foreigner doing morning exercises with the kindergartners. I should charge admission.

Spring has sprung in Beijing. Also, this place is totally a desert. Humidity hovers around 10-20% during the day. The temperature ranges from like 1 to 20 Celsius. It's crazy. Crazy but much nicer than the frigid and dry weather that we had all winter.

Oh, and the dust storms have begun. Beijing is really windy and really dusty in the spring. It even rained mud a couple weeks ago. According to a friend who has been here for a while, the "cotton puffs" are coming. Apparently every other tree in town rains white fluffy stuff in a few weeks here.

Why did Mao think Beijing was such a great place for a capital anyway?

I got a bike! When the weather got nice, I couldn't stand to go any longer without a bike. I was in the market for a single speed with a mountain bike frame, but that kind of bike is like platinum on a playground here. I went to one of the nicest bike shops in town where they specialize in building bikes from the frame up and they didn't have what I was looking for. They didn't have a single set of cranks with fewer than two gears. This is madness. Beijing is flat.

I eventually gave up on my dream of the ultimate single speed and got the next best thing instead. With the help of a friend who speaks flawless Chinese and knows his way around bikes, I got lightly modified Giant. The only things that changed were the brake lever positions (Chinese reverse them), the rear brake, the front sprocket and the removal of the fenders. I ended up with a somewhat aggressive single speed that fits me pretty well and didn't break the bank (less than $100 including a fuck-you-huge lock!). A few days after I got it, I went to another Giant shop (there are a million of them here) and replaced the seat post with one that was long enough to accommodate my height. I'm riding comfortably now and slowly nursing my legs back into shape.

I'm exploring Beijing one ride at a time now. Yesterday afternoon I rode to Tian'anmen Square from my apartment. Tian'anmen was really sweet because the streets that border it were built for like 5 tanks traveling abreast. Even during rush hour I felt like I was riding alone on an airport runway. On the way there I passed Zhongnanhai. Zhongnanhai is the headquarters of the CPC. Really though, it just looks like a wall with really nice buildings on the other side. Oh, and armed guards at the gates. And cameras, you can't forget cameras.

So that's kinda cool. I'm only 20 minutes from Tian'anmen Square by bicycle. 10 minutes if there isn't any traffic (which is never). 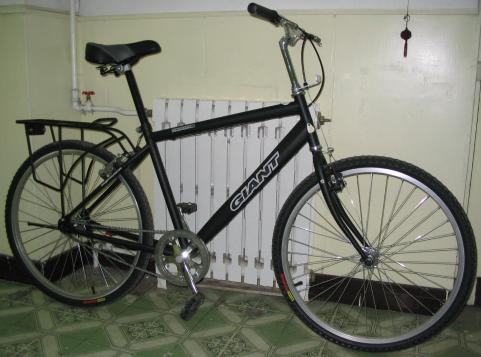