I have now moved in to the new den. I finally got the new desk together: 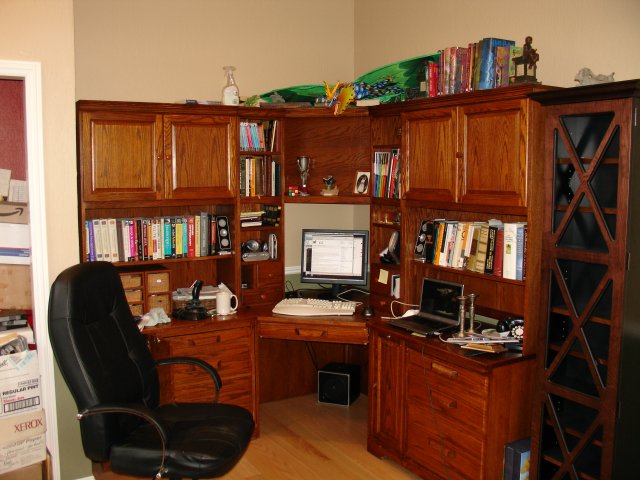 BTW: Anyone noticed that the User Files dropdown seems to have an odd sort order? It's partly alphabetical and partly not. Didn't it used to be sorted by date of upload?

I'm trying not to financially panic about all this. We're paying out of it from a credit line, and credit lines are always ARMS. The rate is rising. We need to refinance as soon as possible but we can't do that until we finish paying. We can't finish paying until it's done.

Unfortunately, the rains mean that we can't paint or pour the driveway and the time overruns mean the contractor went off to do other jobs he'd promised to do. (I'm not too worried about this as there's a big chunk of change he doesn't get until he finishes.)

Anyway, when I bought this desk I was a bit disappointed with the design. It's made for two machines (two CPUs[sic] it said in the design) but the cabinent the case goes into only has one little offset hole in the back making cabling hard and ventilation crappy. In the old den the doors were always open because otherwise the cabinet would rapidly hit temperatures of 130F or more.

So having a garage finally, I bought my first manly-man tool: a jigsaw. Then I cut real ventilation holes in the back of the thing. Each of the CPU[sic] cabinets now has a 8" by 20" hole. This, coupled with smart outlet placement means that I no longer have to pull the desk out as often when moving cables and the cabinets can be closed and still run at room temperature.

There were casualties in the move. One USB hub/card reader had it's connecter pulled out, making it trash. Worse, the other one now seems to randomly turn off and my network has unaccountably switched down to 10 mpbs.

The speakers are a new addition, and have a nice feature in that they take inputs from two machines at once, so now I can play Counterstrike while listening to Bach.

in typical fashion, I have just been given a promotion for one of the worst projects I've ever been on, and one of the biggest software disasters in my company. Go figure.

Seriously, my entire career, I do something awesome, and it goes utterly unnoticed and unregarded. Things go wrong, or I spit out some stupid little program that takes twenty minutes and I get a raise or promotion.

I must be a sick person because while reading the seriously sad story on the front page, the idea popped into my head to write a story about future predictions of husite deaths. Obviously not something that I should do. Hell, I probably shouldn't even mention it, but something like:

RogerBorg: decapitated by a historically accurate 12th century halberd
theantix: Choked to death on cheese
mns: Taken out by a SWAT team in a cabin in the mountains of Montana
Christopher Robin was Murdered: killed during the rampage of an insane coworker.
DesiredUsername: Blown up by an exploding kiln.
Millman: choked to death trying to get that third donut down.
StackyMcRacky/clock: Death by sex.

I'm sorry...I need to stop now. I'll probably just edit this out after the backlash.